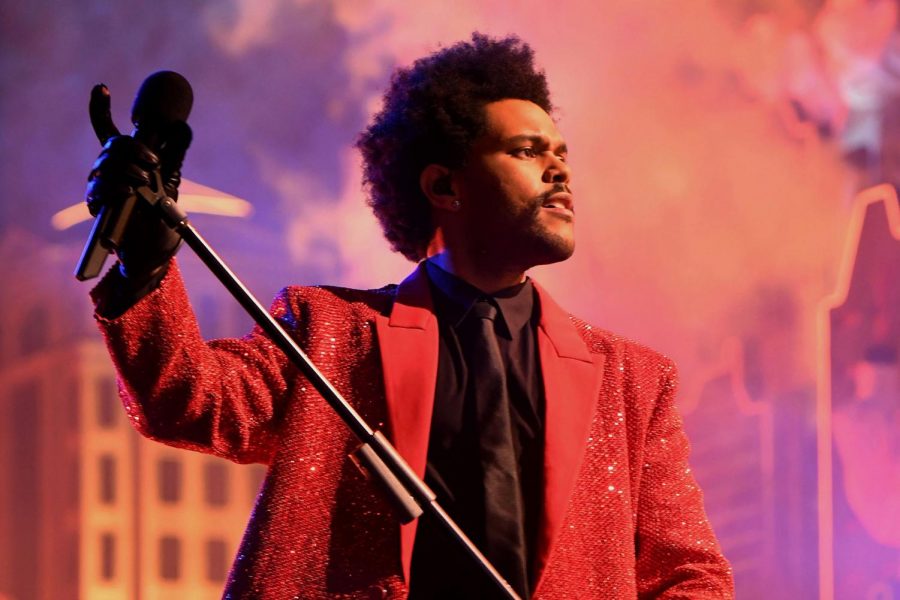 The Weeknd highlighted the Super Bowl LV halftime show on Sunday, Feb. 7 with his unique stage presence. However, the performance, while being a major step in The Weeknd's career, was not his best. Photo courtesy of Getty Images.

Grammy award winning Canadian singer, songwriter, and producer Abel Tesfaye, better known as his stage name The Weeknd, headlined the Super Bowl LV halftime show on Sunday, Feb. 7, highlighting his extraordinary journey to stardom throughout the past decade. The performance took place within the stands for the first time due to heavy pandemic restrictions, and most of the action was intended for the cameras instead of the in-person audience. However, even though the concert was designed for at-home watchers, I felt that the overall performance had something lacking in terms of showcasing The Weeknd’s true talent.

The show opened with the 2018 record Call Out My Name swelling through the stadium, intoned by a choir on a tall high-rise platform with multiple levels. The Weeknd, wearing a sparkling red blazer from his latest album After Hours, slowly walked to the stage while conducting to the music, surrounded by smoke and a bright yellow glow. When he entered, the tracks quickly switched to his 2016 hit Starboy, flashing neon lights and mesmerizing the audience with its hypnotic beat. Backed by the choir and dancers wearing helmets exactly like the ones worn by his collaborators for the song, Daft Punk, the essence of Starboy was perfectly captured in the bright colors and explosive fireworks scintillating in time with the melody.

However, as soon as the song changed to one of The Weeknd’s more brooding records, The Hills, I could see that the show was slipping downhill. The substandard choreography immediately drew my eye, due to the fact that the dancers resembled something close to medieval priests, underlined by the strange chanting of the choir. In fact, it felt as if the entire atmosphere was attempting to make the bone-chilling, sinister track that had enthralled so many listeners previously into a peculiar spectacle not befitting of the moody ambience associated with the song.

I Can’t Feel My Face, the 2015 chart-topper, led the performance into an overly bright labyrinth with the backup dancers in garb as bandaged lookalikes of The Weeknd. In my opinion, this segment was the most unsatisfactory and disappointing of the show. The camera angles were off-center and unsteady, and the halls were filled excessively with bizarre dancers, making it extremely difficult to watch. I assume that the purpose of this setup was to create the feeling of disorientation expressed in the song, but all I could focus on was the strangeness of both the choreography and the singing.

Although the next two tracks, I Feel It Coming and Save Your Tears, were more watchable, they were still unremarkable in every way. Earned It picked up the pace a little more, with ballad-like violin instrumentals in the background and impressive runs by The Weeknd. The choreography was more organized as well, and I consider it to be the highlight of the entire performance. However, this soon dissolved when the stage moved down to the field. The grotesquely bandaged backup dancers stomping rhythmically to the beat of one of The Weeknd’s earlier records, House of Balloons, was wholly monotonous, and some of the singing, if it can be called that, was largely off-key.

The final resolution into Blinding Lights, The Weeknd’s latest smash hit, was altogether unexceptional, and wasn’t the crescendo of a grand finale I had been expecting. However, the “blinding lights” held by the backup dancers were an artful decision, and the mayhem of the dancers was more suitable for both the field and the song. The ethereal tones were flawlessly executed, and the emotional notes could be felt through the screen. Nevertheless, I believe that it could have been more exciting with some added elements such as fog machines on the field and better choreography.

The Weeknd is famous for his moody style of singing and dark themes, often displayed in his music videos, including the video for Blinding Lights, which opens with raving laughter and his face covered in blood. However, this brooding edge to his music was not really presented in the halftime show, possibly due to family audiences watching. Even so, I felt that without hearing the bleakness associated with many of The Weeknd’s songs, I couldn’t really enjoy them. I also felt a sense of disorganization and haphazardness throughout the performance, from the first minute the neon lights flooded the stage until the last burst of fireworks.

Though this Super Bowl halftime show was at best ordinary, and did not properly showcase the masterful artistry I am familiar with in The Weeknd’s unique approach to music, it was a major stepping stone in the artist’s skyrocketing career. He started as an anonymous producer in Canada and is now grabbing the spotlight in an event watched by almost 100 million viewers nationwide. His next album in the works, rumored to be inspired by the tragic events of 2020, is eagerly awaited by countless fans. The 30-year-old’s musical potential is yet to be fulfilled, and I am optimistic that he will break records once again with his incredible talent in the months to come.