The Electoral College Should Not be Abolished 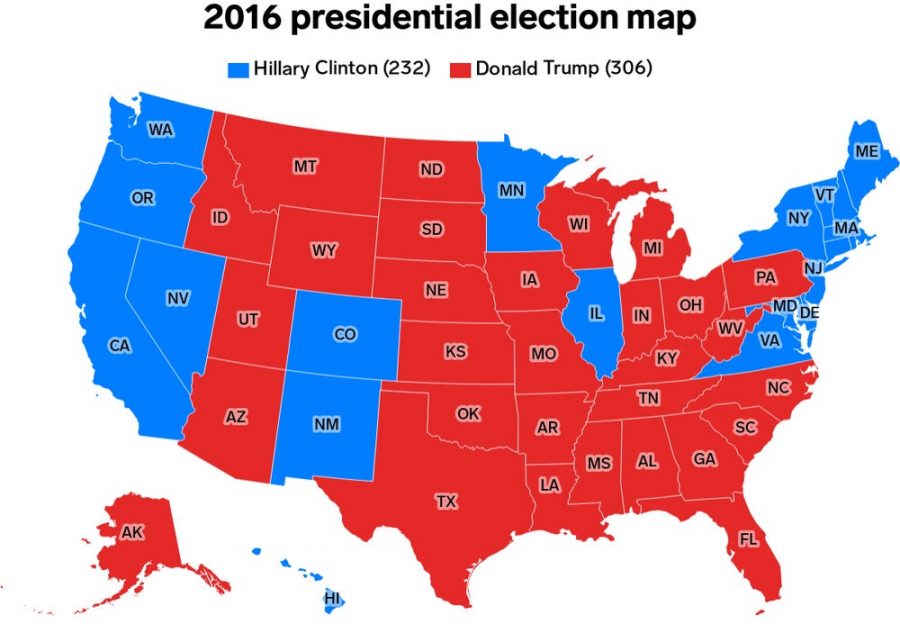 A map of how the electoral college voted in the 2016 election. Though the system seems unfair, it gives a chance for citizens in less populated areas to have their voices heard. Photo Courtesy of Business Insider.

When I was watching the 2016 presidential election, I remember the states turning cherry red one by one, slowly pushing Donald Trump ahead of Hillary Clinton. I remember I was perplexed as to why this was happening, especially since all of the reports I had watched previously predicted a knockout for Clinton. My confusion only multiplied when I saw that Clinton had won the popular vote by over two million ballots. If more citizens voted for Clinton, why wasn’t she elected? How could the electoral college supersede the majority of the country? I couldn’t comprehend why such a strange system had been designed.

The questions I asked myself after Trump’s election about the necessity of the electoral college have been repeatedly pondered throughout the country. Most still don’t understand the need for its creation. But the founding fathers knew what they were doing. They were aware that the office of the president and the democratic system we revere would quickly fall to pieces without the tight reins of the electoral college.

The crux of the matter lies in representation. Candidates have to campaign for months before elections solely due to the electoral college. The majority of the population is concentrated in large cities, and using the popular vote to determine the election would only stamp on the rights of people who live in more rural areas. Imagine that a candidate wanted to win an election based on popular vote. They could go to the extreme of promising to cut taxes for urban citizens and raise rural taxes astronomically in order to secure the vote. Though this example might not be strictly constitutional, the fact is, without the electoral college, candidates could easily ignore the less populated parts of the country and implement policies in kind. The idea of democracy is burned down. The president is supposed to represent the country, and using the popular vote as a tool for selection would undeniably disregard the rights and interests of all voters. The electoral college forces candidates to create coalitions that appeal to several different types of voters, and when they are elected, the president truly is a voice for the entire country.

When the founding fathers drew up the electoral college system, they had just detached themselves from tyranny. They wanted to ensure that a monarch could not take over the government and turn the newly formed country into another version of England. If the president felt like they were elected by the majority of the people using the popular vote, they could readily believe that they were destined to rule the country, and could dissolve it into a monarchy using the popular vote. Imagine a federal election held by the party in power. Imagine that they could control the voting methods, the number of votes each state contributes, how many years between the elections, etc. This could very well be the situation today if the electoral college wasn’t created years ago. Our founding fathers were aware that without a third party removed from the results, a repeat of the tyrannical system they had just escaped was not only possible, but probable.

Some people insist that the electoral college allowed slavery to persist for so long, that it continues to promote oppression and white supremacist attitudes. But it is inaccurate to blame the electoral college for sentiments it cannot control – it is just a system to ensure representation for many different kinds of voters. The unfortunate truth is that millions of people used to believe in slavery, and that viewpoint was reflected in the choice of their president and government. Saying that slavery would have been eradicated in the absence of the electoral college is an oversimplified argument. Without a system to represent voters in all areas of the country, slavery would have still endured – the states that depended on an enslaved workforce would have left the US to create their own shackled state (which is what caused the Civil War). Additionally, if the interests of slave owners were not represented years ago, then who’s to say that the rights of minorities would be represented today? While slavery was clearly wrong, the people and the economy of the century are to blame, not the electoral college.

After the 2016 presidential election, I didn’t understand the complexity of the electoral college that ensured everyone could be heard in this vast country. Clinton didn’t lose because of a flawed system. She lost because the Democratic Party was overconfident in their lead. She didn’t quell the fears of voters in less populated areas when they showed uncertainty. Trump campaigned where he knew it mattered the most, and thereby secured the election. It is evident that we are not oppressed by a faulty or ineffective system. In fact, the only reason we can still call ourselves a democracy is because of the electoral college. To implement the change we wish to see, we have to try to work together as a country and understand that all the different kinds of people have a voice. Progress can only come with unity.