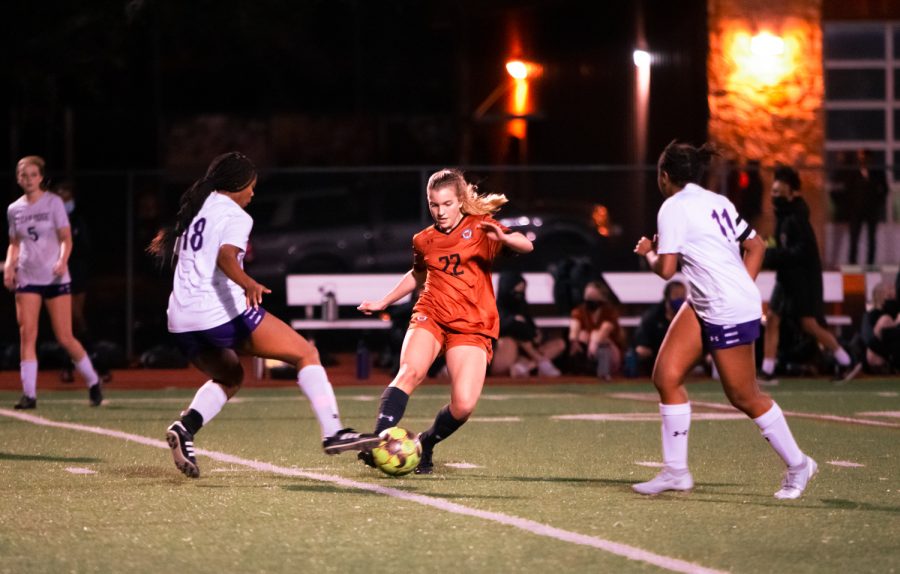 With two opposing players on each side, forward Katelyn Woodruff '21 attempts to dribble the ball around to maintain possession. Woodruff would make a pass to another teammate.

The varsity girls’ soccer team played against district rival Cedar Ridge on Friday, Mar. 5. The game started out pretty slow, but after a while, the Warriors started to get the ball moving. The team gained confidence after scoring their first goal, and the first half ended with the Warriors leading 2-0 after another goal later in the half.

“[The game] started out a little slow, but we went with it,” Elizabeth Kotick ‘22 said.

The cheerleaders performed during the halftime break as entertainment for those in attendance.  The players came back from the half more energized than ever and the game started to pick up the pace. They didn’t let the ball stay idle for once by passing it back and forth the whole time. The Warriors scored three goals in the second half to win the game 5-0.

The Warriors will play against the Stony Point Tigers at Stony Point High School on Friday, Mar. 12.