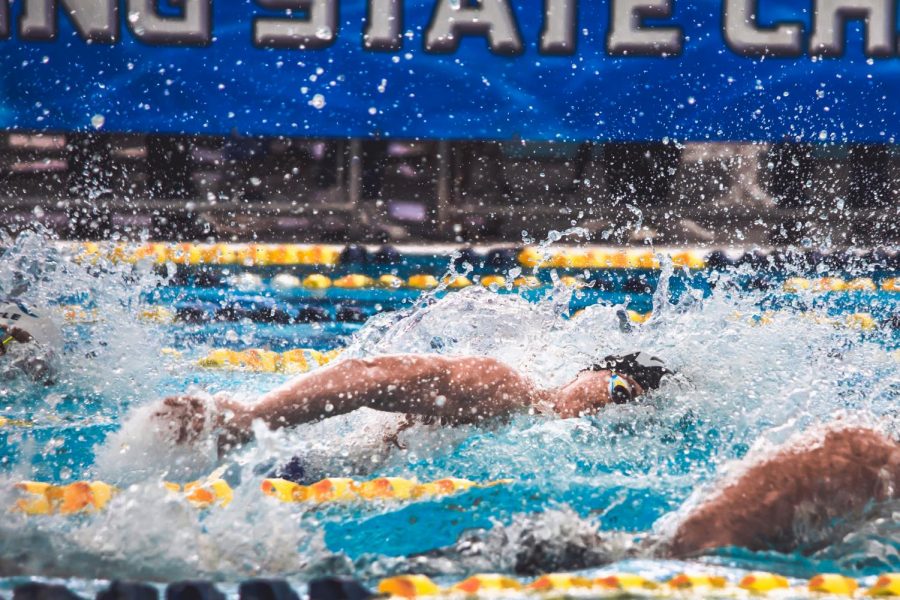 Sonny Wang '23 rockets to a first-place finish in his 50yd freestyle. Wang tied for first with senior Luke Prior in a time of 20.56.

The varsity swim team competed in the State Championships over the last few weeks. Due to COVID-19 restrictions, the boys competed on Friday, Feb. 26 and the girls followed along a few weeks later, competing on Tuesday, Mar. 2. Although the competition looked differently this year than it has in the past, both teams were very successful, girls placed 5th overall, and boys placed 11th.

“I’m very proud of how the meet went and how the swimmers did,” assistant coach Austin Franklin said. “Both the girls’ and boys’ teams did amazing, and either way, it was an awesome way to end a weird season.”

“I couldn’t ask for a better boys team,” B. Truong said. “The people who swam in the relays gave it their all, and I’m really happy with how everyone did.”

“I’m really happy with how my swims went,” Wang said. “Not only did I drop some time, but I felt really good after my races, which was awesome.”

Following up the boys’ state meet a few days later were the girl Warriors with amazing races. The girls’ 200-yard medley relay consisting of Emma Bierley ‘22, KyAnh Truong ‘21, Shireen Gore ‘23 and Sadie Runeman ‘21 beat the school record yet again and placed fourth overall. Swimming the 200-yard individual medley, Runeman placed third by .01 of a second and seventh in the 100-yard backstroke. K. Truong placed fourth overall in the 50-yard freestyle and first in the 100-yard butterfly. Ayame Castel ‘22 placed 11th in the 50-yard freestyle as well.

“It was such an amazing meet,” Gore said. “All of us did great, and I’m so, so happy with how all of our swims went.”

Although it’s the last swim meet of the season, the team still plans on preparing for next year’s season by going to club practices, and attending swim events such as banquets, occasional team practices, and more.

“I’m definitely going to miss the team next year,” Shreyush Shankar ‘21 said. “But we are all super close, and even though the season is over I know that we are all going to keep hanging out.”

The next swim-related event for the team is the Senior Swim Banquet, which is planned to be held outside in April.