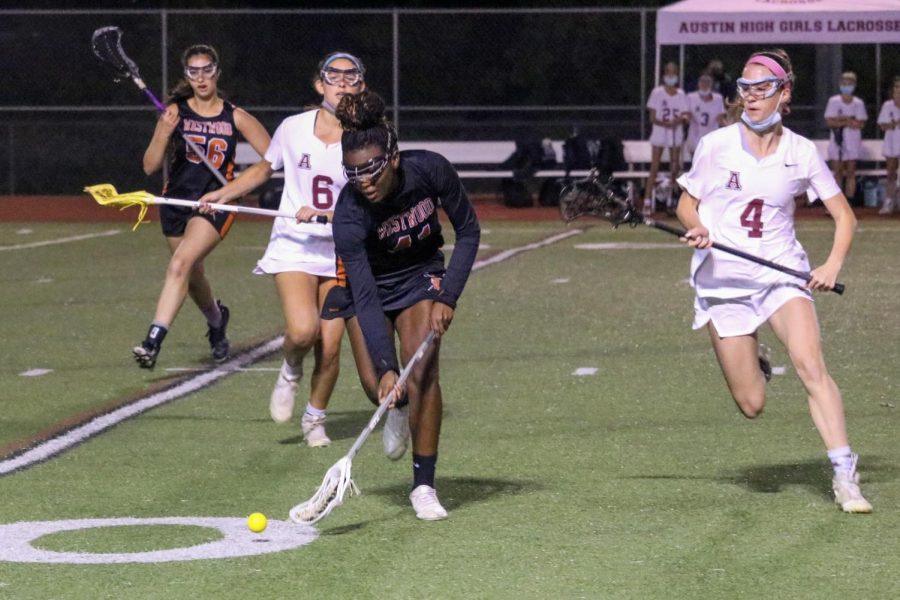 Defender Kaybee Briggs '21 scoops up a ground ball before the Austin attackers. She then ran the ball down the midfield to make a pass.

By Amelie Puga and Arushi Sharma

The varsity girls’ lacrosse team beat the Austin High Maroons at their first playoff game on the drizzly night of Thursday, April 22. The team headed into their district semi-final game as the lowest remaining seed, but with an intense display of their skills and teamwork, beat the undefeated first seeded Maroons with their well-deserved 13-10 win.

The Warriors started off strong with a goal by Sarah Poppe ‘22 within the first minute of the first half, but were immediately countered by an Austin goal. Before long, Poppe scored another goal and Sam Newlin ‘22 followed suit and converted a penalty shot for the Warriors’ third goal. A fast break by the Maroons won them their next goal. Laura Moravec ‘22 got the ball from an Austin attacker and, from the sidelines, passed it back to goalkeeper Makhia Elliott ‘21, who cleared it up to Megan Moravec ‘21 at the opposite 30-meter line. There, despite strong offensive positioning from the Warriors, the Austin goalkeeper gained possession and created the opportunity for the Maroons’ next goal that put them in the lead with only four minutes left in the half. The Warriors pushed on and with lots of offensive and defensive communication, proceeded to make two more goals and ended the half with a 6-5 lead.

“Everyone came into the game hungry for redemption, and [for] the win, after barely losing the week before,” Poppe said. “It was so amazing seeing everyone play harder than ever before, and [to see] how we all worked together so smoothly and left the number 1 seed shocked and with their first loss of the season.”

The Warriors started off just as strong in the second half as they did in the first. From the draw, the Warriors ran the ball directly down to the goal where they went through an isolation play and opened the lane for Newlin to score. The Maroons fought back with two more goals, bringing the score to a tie. Soon after, Austin received a penalty shot but missed, resulting in a turnover and a smooth transition down the field where the Warrior attackers ran another isolation play, allowing for another goal. Austin won the following draw and ran a play at the Warriors’ goal, but Elliot was able to intercept an Austin pass and cleared the ball up the field. The Austin coach called for a timeout, and after reconvening, the Warriors won the draw and settled it at the Austin goal. Despite a failed iso, Newlin swung around the goal and scored, making the score 10-7. The Warriors pushed on and shot two more goals, but the Maroons made up part of the point difference with three more goals of their own. In the last few minutes, Newlin received a free position and scored the last goal of the game. The Warriors finished the game with a 13-10 victory.

“Last night was absolutely spectacular,” Coach Chelsea Moses said. “I am beyond proud of the way this program handled themselves during the game and how we came away with such a huge upset in the District.”

The team faced off against the Anderson Trojans at the district championship on Saturday, April 24, and are headed to the state playoffs in Houston on May 8 and 9.