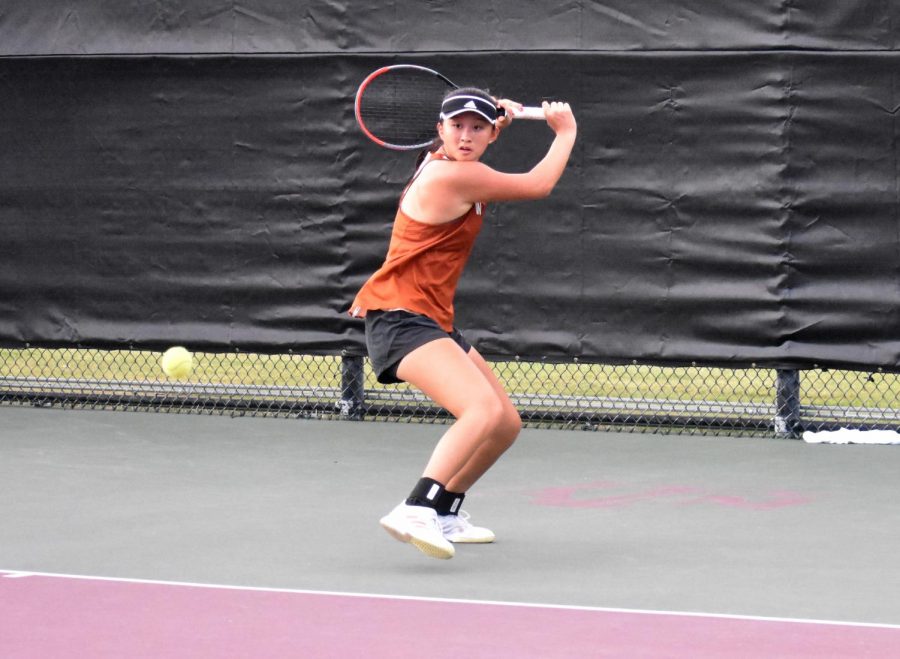 Advancing inwards on the ball, Jessica Lu '21 maneuvers her racket face in preparation to hit a short trajectory backhand slice shot. Lu is one of six tennis players to advance to the State tournament later this month.

Unrelenting in a continuing takedown of area powerhouse programs, the varsity tennis team, bolstered by the triumphs of a headline fall season, swept Region IV in the UIL 6A regional tournament on Thursday, April 29 at the Northside ISD Tennis Center. Securing both the boys and mixed doubles titles — two out of five total events — the Warriors also claimed second place in girls’ and boys’ singles.

“It was great seeing many of these kids get their spring [season] in,” head tennis coach Travis Dalrymple said. “It was taken away last year and now we aren’t leaving anything to chance. They all stepped up and brought the heat. I ask a lot of them each and every day but I let them know it will be worth it.”

Singles play met fierce competition, where Jessica Lu ‘21 and Nic Pesoli ‘21 fought ardently over the backdrop of their fellow teammates’ encouragement. Ultimately falling short, they would drop their matches 6-2, 7-5 and 6-2, 6-3 respectively. Looking to end a headlining year on a high note, the return to individual play is one the program cherishes.

“I’m so proud of how hard these kids have worked and the results it brought,” Coach Dalrymple said. “We didn’t let outside distractions get in the way of our goals and we rose to the top. Losers make excuses, winners make adjustments. Anyone can use [COVID-19] as an excuse, we choose not to.”

Shattering a school record, the six athletes are qualified to compete in the State tournament to take place from Thursday, May 20 to Friday, May 21.