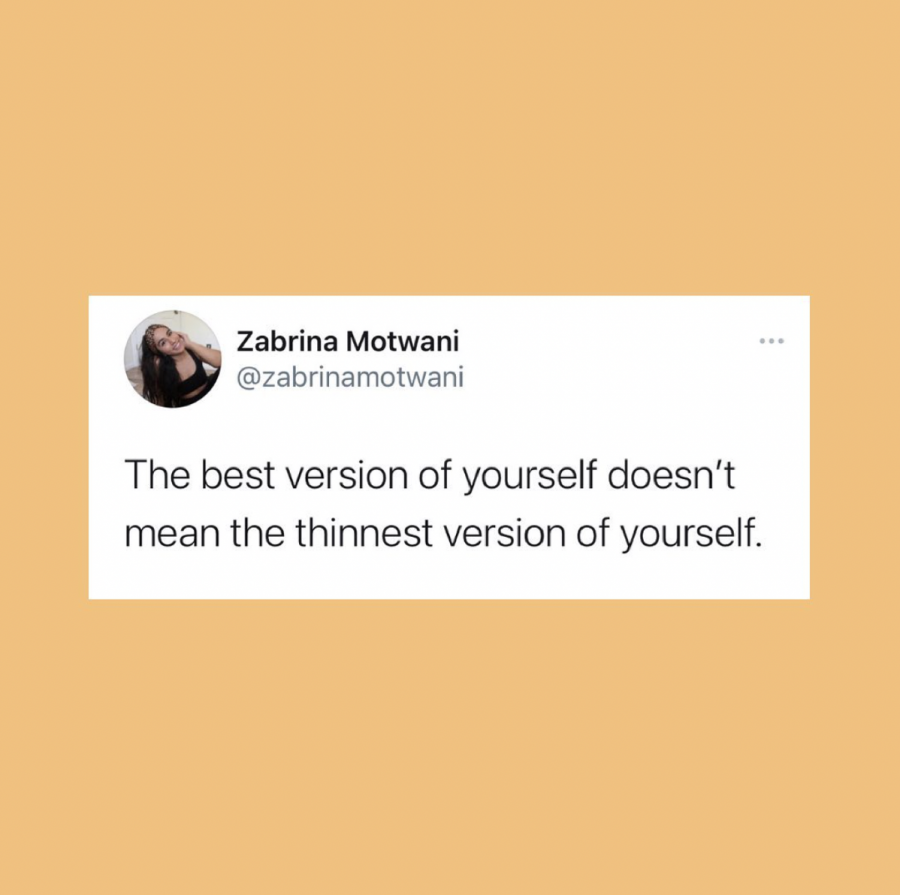 With summer beginning, many trends including toxic diet culture start to emerge. As a society, we need to understand that looking and feeling healthy are two separate terms. Photo courtesy of @zabrinamotwani.

With summer just beginning, a new series of trends start to emerge. While some of them may be exciting and unique, many others create a disturbance in our lives. Each year, the recurring goal of having a “hot girl summer” physique by trying various ways of losing weight, whether it be from not eating, trying new diets, taking medication, or overworking our bodies with workout routines, creates a blindfold on the real issue at hand: diet culture.

The Alliance for Eating Disorders defines diet culture as “Any programs that encourage extreme weight loss, require restricting yourself, and suggest cutting calories […] as well as programs that advertise weight loss pills and shakes.” I see diet culture as a personalized struggle. There are different meanings of diet culture for everyone, and everyone handles it differently. Often it’s looking at a mirror and imagining what you could do to your body to change your shape. It could be not eating for strenuous amounts of time, drinking fluids such as apple cider vinegar that the internet promises will give immediate changes, or trying different medications. Whatever it is, it needs to stop. The internet and the people around us often shove down the idea that changing your physique will make you feel better about yourself, and it will make other people like you more. But in reality, they are just shoving down the repugnant idea of diet culture.

Last year, popular YouTube content creator Chloe Ting became highly well known for her “Get Abs in TWO WEEKS” video. The video guaranteed abs in two weeks and showed pictures of girls who had achieved what the video was promoting. I tried the two-week shred. Although I did see results, I found that they were minimal compared to other people’s results. I became distraught in my appearance, more so than before. I saw girls with a “perfect body” get even more of an hourglass figure and slim. I continued the workout for two months, never missing a day and oftentimes doing the exercises up to four times a day. I decided to stop after two months when I realized that my body had stayed relatively the same shape. With actions such as the two-week shred, I noticed how much my behaviors and routines changed my health. My physical health was the same, but my mental health had severely deteriorated. In a desperate attempt to fit the beauty standard mold, I had instead engraved a self-deprecating mold in my mind.

Diet culture often emphasizes that if you aren’t perfect, you aren’t anything. However, that statement could not be farther from the truth. We shouldn’t use “looking fat” as the primary motivator to lose weight. We should instead focus on having a healthy body and mindset. The obsession with becoming “perfect” can often lead to various eating disorders and mental health issues. Because in reality, what is perfect? Is it looking like a top-tier supermodel and feeling sick? Or is it feeling healthy in your best body?

Social media has become one of the top ways to promote toxic diet culture. Not only does social media promote products that will allow you to “immediately see changes,” but it also encourages many diets, such as keto, paleo, and low carb. What social media doesn’t show is that many people use these diets because it’s the only way to survive or it is compatible with prescribed medication. In fact, according to a clinical report by the American Academy of Pediatrics, people who diet moderately are five times more likely to gain an eating disorder, and people who restrict the amount of food they intake are 18 times more likely. However, in the eyes of young viewers scrolling helplessly on their explore pages, it provides them a simple alternative to losing weight. Thankfully, promoting toxic diet culture hasn’t gone unnoticed. In September 2019, Instagram announced that they would be hiding posts that glorify diet culture and promote weight loss from users under 18.

As these trends to lose weight pick up again, it is essential to note that feeling healthy and looking healthy are two separate things. As a society, we need to take care of ourselves and check up on others. We live in a world where having a slim, hourglass physique is praised upon. Instead, we should praise people who continue to stay healthy and ignore everything and everyone that promotes toxic diet culture. Focusing on feeling healthy is the real way to have a “hot girl summer.” Everyone has a perfect summer body. Don’t let anything you read or hear change that.