Celebrating Heritage and Identity in Captivating Song, ‘In The Heights’ Explores the Triumphs and Shortcomings of Representation 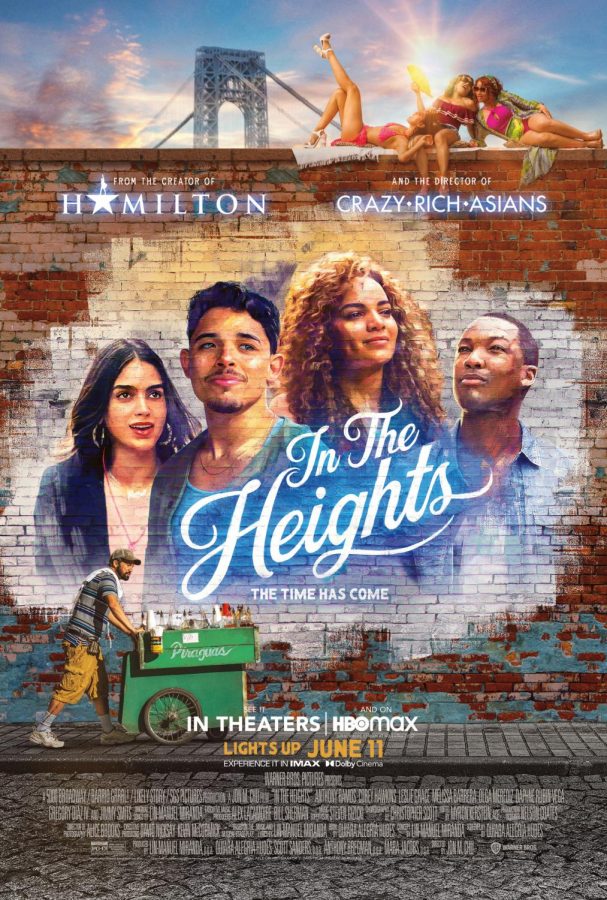 'In the Heights' released on June 9, 2021, epitomizes the notion of the American Dream with glorious and sometimes somber tunes. Photo courtesy of IMDb.com

Though relatively unknown compared to the vastly famous Hamilton, In the Heights, crafted by one of Broadway’s most triumphant creatives Lin-Manuel Miranda, has an extremely crucial story to share, and highlights some critical themes that also take center stage in Hamilton.

Prior to being washed over in the waves of his Hamilton glory, Lin-Manuel Miranda created In the Heights, which debuted as an off-Broadway and then subsequently Broadway musical which soared as a burgeoning dedication to heritage, identity, and the duality of being an immigrant or the children of immigrants in America. This exploration of being stuck in a sort of tension between two nationalities and cultural spheres is beautifully encapsulated by the intricacy and complexity of the film’s layered portrayal of the immigrant identity, while simultaneously capturing a realistic commentary on the immigrant experience in America.

The film, despite undergoing a slight ‘hollywoodization’ from the theater production, remains true to the core of the musical and crafts a sweet and oftentimes saccharine depiction of the nature of dreams, and how hope can radiate even when the world seeks to devalue your identity. Spilling vibrant summer shades onto the lively New York neighborhood of Washington Heights, the film explores the pride of embracing one’s cultural heritage and just how integral immigrants are to the multidimensional mosaic of American society.

As the daughter of two immigrant parents, I could really see myself in this story and truly felt connected to the idea that you can be a proud American, and also be tethered indelibly to your native culture. It was heartbreaking to see scenes that showed how even if America didn’t treat the citizens of the Washington Heights neighborhood like they deserved to be called “true” Americans, the resounding message of the film was to “assert dignity in small ways.”

This phrase truly shattered my heart because this is something immigrants, children of immigrants, and minorities feel they must do in order to be accepted for who they are in the face of contemporary American society. The phrase also does resonate with hope, and signals an unrelenting sense of perseverance in the face of adversity. It contemplates the mentality that immigrants and minorities feel they need to work tremendously in order to be respected and to gain the same positions as their non-immigrant counterparts.

One of the most heart-wrenching scenes in the film captures Abuela Claudia, a matriarchal-like figure who has dedicated her energy and sparkling spirit to the Heights community. She reflects on how she and her mother immigrated to America in search of a better life, yet were consistently tested. She poignantly reflects on how her mother had to give up everything in order to survive, and even when she did all she could, she still was barely making enough to make ends meet for her and her daughter.

The song Paciencia y Fe captures the the intense longing Abuela Claudia faces remembering her joyful and sunlight-drenched childhood in Cuba, where dancers, in an ethereal swaying movement, mimic birds and emulate the bliss of the tropical setting as she walks in the corridors of her dreams in a New York subway car. The song details the harsh times Abuela Claudia faced with her mom in Cuba, such as her mom not being able to find work or bouts of hunger running rampant with the grueling jobs her mom did in New York. New York City, while being a place synonymous with the ambiguous and ever-sought after American dream, inevitably makes her weaken under the intensity of work and the racism perpetrated against her and other immigrants. In a struggle to craft a semblance of a living, the words of her mother speaking “paciencia y fe” or patience and faith, cling to Donna Claudia like ink permeating paper even years later. Through the somber yet captivating ballad, she contemplates the idea of dreams and how they can shift or collapse under the burden of necessity, and how we seek so long for dreams that are stolen from us.

The American dream is an ethos that integrates itself into every aspect of this film, tangling the past in the precious fabric of the present. From a scene capturing protests against legislation aimed towards the removal of Dreamers, to the discussion of the prospects of dreams often working in opposition to the raw reality of life, and also intermingled with the concept of America being a land of opportunity for immigrants but also intolerant of the spectacular diversity it boasts in many ways, the film strives to engender hope and rally its audience to continue to fight for equality and an all-encompassing appreciation for all immigrants.

Immigrants have crafted and worked tirelessly for the betterment of this nation, yet they have been and continue in many ways to be undervalued, undermined, and their interests unrepresented. A film like this speaks for all immigrants and all underprivileged groups, culminating the realities and experiences of many.

One issue many have found with the film despite its profound message is the lack of Afro-Latinos in the film, specifically in the main cast. Washington Heights “is known as Little Dominican Republic. At least 90 percent of Dominicans are of African descent,” according to a New York Times article about the film. If seeking to achieve representation, it is of the utmost importance to accurately represent the community you are depicting. This problem stems from the institution of Hollywood, one shrouded in mystery and prestige simultaneously, and an industry that has intentionally denied or ignored minorities both in creative jobs behind and in front of the silver screen. Hollywood has long sought to craft and curate images that propagate certain ideas of what it means to be a person of color, often bending to the will of stereotypes and judgements that are either harmful or accurate but not properly depicted to do justice to the community portrayed. Hollywood has formed images of what it means to be of a certain ethnicity or culture but has failed to represent the entirety of that select group. The institution has relied on a narrow view of what cultural identity means and has avoided comprehending and illustrating the truly complex and diverse nature of identity.

“They could have hired more Black Latino actors, not to fill a diversity quota, but because that would have reflected the truth of the neighborhood,” writer Concepción de León said in the same article published in the New York Times.

The article features several New York Times writers commenting on the lack of Afro-Latino representation in the film, and how a film that is so beautifully dedicated to the adoration and importance of heritage excludes a large sector of the community it seeks to capture in its homage to the culturally distinctive New York neighborhood.

“Our culture is beautiful, [and] our music is beautiful, but we are not enough to be highlighted with it. Everything we create, like the salchichón and mangú meal shown in the movie, or the merengue and sliver of bachata, can be celebrated, but not us,” writer Sandra E. Garcia said.

But the movie, despite its inaccurate and incomplete representation, maintains something in its favor. Representation that seeks to highlight a community without relying on offensive and discriminatory stereotypes and that doesn’t seek to invalidate experiences and identities but seeks to cover their perspectives accurately is a step in the right direction. However, this is not an issue to ignore. While we may be joyed to think representation is melding into the mindset of Hollywood, it would be harmful not to comment on the fact that racism still plays a large part in who is selected to take on lead roles in both big-budget and smaller scale productions.

“There were many ways in which watching the film was gratifying — seeing my beloved Dominican flag not only depicted, but exalted onscreen was a joy, as was the depiction of common immigrant struggles such as yearning for your home country, making great sacrifices to make it in New York, or struggling with finding community in college,” De León said. “Showcasing these cultural elements is no doubt important, but it cannot be divorced from or done in lieu of depicting Black Latinos themselves.”

Hollywood has time and time again selected actors to fill roles they feel are representative of a certain community. By so blatantly discluding Afro-Latinos, the film forgets their integral presence in the neighborhood and maintains the ideas Hollywood has preserved and protected: that ethnicity is and is only to be portrayed one way and that someone who is Latinx has to align with what they believe traditionally conforms to their set notions.

The roots of this racism precede Hollywood and have long tethered themselves to Dominican and American culture, but art must do what society has failed to do. This issue transcends beyond this film. It is important to celebrate the many admirable things this film highlights and champions, but remember that Hollywood must address its representation problem in more meaningful ways that it has. To not confine roles to certain actors. To address its colorism and prioritize unvarnished representation and authenticity to truly depict the subjects films pertain to. Only then, will films depict the diversity they so ardently champion.

Dreams paint the skyscape of the neighborhood, brandishing the city rooftops in stellar constellations of possibility and cascading songs in the waves of heat; dreams unfulfilled, achieved, or yet to be garnered. Dreams serve to motivate the characters, ailing their worries about the often mercurial nature of everyday life. Those dreams are ones minorities can see reflected in themselves; the want for autonomy, the longing to be appreciated by America for their hard work and contributions while being targeted by the venomous tendrils of racism and prejudice but also representing their mother culture and dialect, and grasping onto the identity that permeates every facet of their lives.