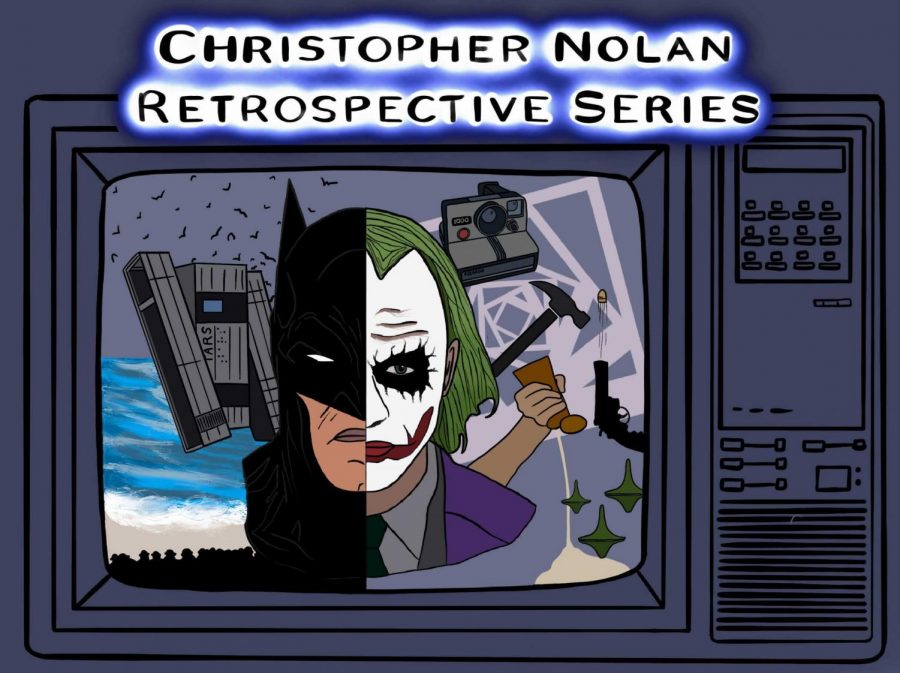 In this Christopher Nolan retrospective, I will be giving an in-depth analysis of each of Christopher Nolan’s eleven films, starting with 'Following.' 'Following' is an amazing thriller that kick-started much of Nolan’s style. Art by Hadley Norris.

This piece is part one of a six-part series.

Film geeks have come to adore Christopher Nolan movies, but not many people have seen the low-budget thriller that kicked off his legacy. Following was directed by Christopher Nolan and was released on November 5, 1999 to general audiences. It was also Nolan’s first directorial effort on a feature film. With a short 70 minute runtime, the film had an estimated budget of $6,000 per IMDb, and was even shot in black and white. This film was the birth of a classic Nolan trope, introducing the idea of non-chronological storytelling which he would go on to use in films such as Memento, Interstellar, and Tenet to name a few. Despite being a low-budget student film, Nolan procured a very intriguing film, if not a masterpiece.

The film seemingly follows three men: a man in a simple jacket with long hair, a well-dressed man in a dark suit, and a man with many injuries on his face. In the end, it is revealed that they are all the same person.

This first example of Nolan’s non-linear storytelling is perhaps the most clumsy aside from Dunkirk. In Following, the transition between each concurrent time period can seem very confusing and unclear. Nolan would later fix this flaw in Memento where his two converging stories were actually filmed in both color film and black and white to differentiate from the timelines, and works from then on were always easier to keep track of.

The plot of Following is centered around a character who is called Bill in the movie, but is credited simply as “The Young Man” (Jeremy Theobald). Bill is an unemployed writer who finds people to be very interesting. He finds them so interesting in fact that he begins to make a game of following strangers around and studying them, going so far as to create rules such as not following anyone for too long, not following women after dark, and most importantly, not following the same person twice. One day, Bill ends up following a man called Cobb, portrayed by Alex Haw, a robber and a con man who robs not only for the monetary value, but to remind people of what they cherish so dearly and the effect it has when it’s taken away. Cobb takes interest in The Young Man and decides to take him on as a kind of apprentice in an effort to teach him about people.

I think the concept of Cobb is genius. This is Nolan’s first example of taking a character with a seemingly one-dimensional goal or job, like robbery, and turning it into a complex moral exercise. This turns out to be even more brilliant when the twist comes around. Viewers see how Cobb was able to deliberately use what Bill values most from his following, his analysis of people, and use it to turn Bill into someone he can use for his own means. Using characters in this way is a trait Nolan would look to perfect in characters like the Joker and Teddy Gammell (Memento).

One thing I wish Nolan did more of that he does very well here is giving us a look into the life of someone we would call strange or even perverted. This film’s example is the life of Bill. Imagine if someone walked up to you and told you they had a habit of following people around to analyze how they act. Bill might call it following, but society calls it stalking. Yet this film presents an almost rational way of approaching Bill’s habit. After all, seeing what people’s daily lifestyles are like and how they influence their actions is something that interests lots of people already. Think of people who make a living out of studying people’s psychology and coming to conclusions about human nature just by studying people. We don’t think of them as weird, we think of them as extremely intelligent.

This film is also the first of two to hold a Batman easter egg before Nolan would go to make his Batman trilogy. When Bill and Cobb explore Bill’s apartment, Bill’s bedsheets are shown to be Batman styled. This is not the only homage to a later Nolan film. In Inception, the main character’s name is also Cobb, and he also is known to steal in the film.

Bill’s story escalates as he is brought to the apartment of a young woman referred to as “The Blonde” (Lucy Russell). While looking through her belongings, Bill quickly becomes infatuated with The Blonde, going so far as to not only follow her but meet her at her gangster ex-boyfriend’s bar. As Bill begins to build a relationship with The Blonde, he changes his appearance and begins calling himself Daniel Lloyd. As their relationship grows, The Blonde reveals that her ex-boyfriend, credited as “The Bald Guy” (Dick Bradsell), has been blackmailing her using incriminating photos. Bill follows The Bald Guy and robs him of the photos and his money, narrowly escaping one of The Bald Guy’s goons by hitting him with a hammer.  After returning, Bill realizes that the pictures are nothing more than pictures of The Blonde as a model. In the midst of Bill getting mixed up in The Blonde’s affairs, Cobb becomes angry with Bill for jeopardizing his burglaries and punches out Bill on a rooftop.

The movie begins to get confusing here, and the reason for this is The Bald Guy. Up to this point, all three of our characters have had a very clear introduction and reason for existing. We knew of Bill because of the introductory narration, and the meeting of Cobb was drawn out enough that we got to know him as a character. Even The Blonde is well introduced in all three storylines, especially once you realize that the woman mentioned and/or seen in all three realities is the same woman. Unfortunately, it feels like The Bald Guy is just dropped in the story out of nowhere, and doesn’t get enough screen time. This would not become a super consistent problem for Nolan, but it did pop back up in The Dark Knight a couple of times, and it was an extremely prevalent flaw in Dunkirk.

Another factor that might contribute to the film’s confusion is a huge Nolan-ism that starts with this movie. Nolan loves to play with the idea that there is no good guy in his movies, and this can be disorienting for viewers who need someone to root for to keep their interest. This stems from a very cold distance that Nolan likes to give his characters. Does anybody actually like Bill or want him to succeed? I don’t think Nolan wants us to think of his characters from an emotional angle with his films, as his characters are to be looked at analytically instead. If you think about it, he’s kind of creepy, and he’s broken the law on numerous occasions, just like Cobb. This motif would carry heavily into Memento and The Prestige, and I would dare to say in all 11 of Nolan’s films, there is never a definitive good guy that we can get behind, and not even in his Batman films. Tenet and Interstellar come the closest to bringing us that character, and if Tenet was written a little differently, I think it would have been a breakthrough for Nolan.

When Bill talks to The Blonde about the pictures, he discovers the truth. The Blonde and Cobb have been in league for the entire time to frame him for a murder for which Cobb is in suspicion, and the burgling style so carefully shared to Bill is now incriminating evidence. Bill turns himself in and tells his story to a policeman (John Nolan). Meanwhile, The Blonde tells Cobb of her success, where the final truth is revealed. Cobb has been in league with The Bald Guy so that The Blonde will not be able to convict The Bald Guy of a murder committed in her home, and The Bald Guy now has a way to murder The Blonde without himself or Cobb being convicted. Using the same hammer Bill used when robbing The Bald Guy, Cobb murders The Blonde with a hammer. With Bill’s prints on the hammer, Bill is incriminated with the killing of The Blonde while Cobb runs free.

Obviously, this film was very advanced for a student film, and a lot of that stems from how well Nolan was able to build the chilling tone of the movie. Nolan does this, and will continue to do this through the use of his soundtrack. The plinking pianos that often play in the background bring a foreboding feeling and bring an extra level of tension to the film. It’s almost something that would be expected from a horror movie, but it works very well here.

As far as the acting is concerned, these actors are pretty good, but not superb by any means. Jeremy Theobald rarely strays far away from the occasional Nolan cameo, and Following happens to be Alex Haw’s only film. That being said, the acting is fine and credit should be given where credit’s due to Nolan for pulling an inexperienced crew together with low budget cinematography and making a very passable movie.

If I had any complaints about this film, it would be that the film is uncomfortably dense. The 70 minutes allotted to share a jam-packed plot is very short, and another 30 or 40 minutes would have been welcome if used properly. The dialogue in this film is also sometimes mildly hard to understand, but it is easy to understand enough of it to analyze and appreciate the film.

Following delivers a very enjoyable mystery that exercises the brain and makes you want to watch more Nolan movies. It is definitely not his best film, but overall, I would give this movie a solid recommendation.