Connected Through Sisterhood: SunDancers Build Community From the Inside Out 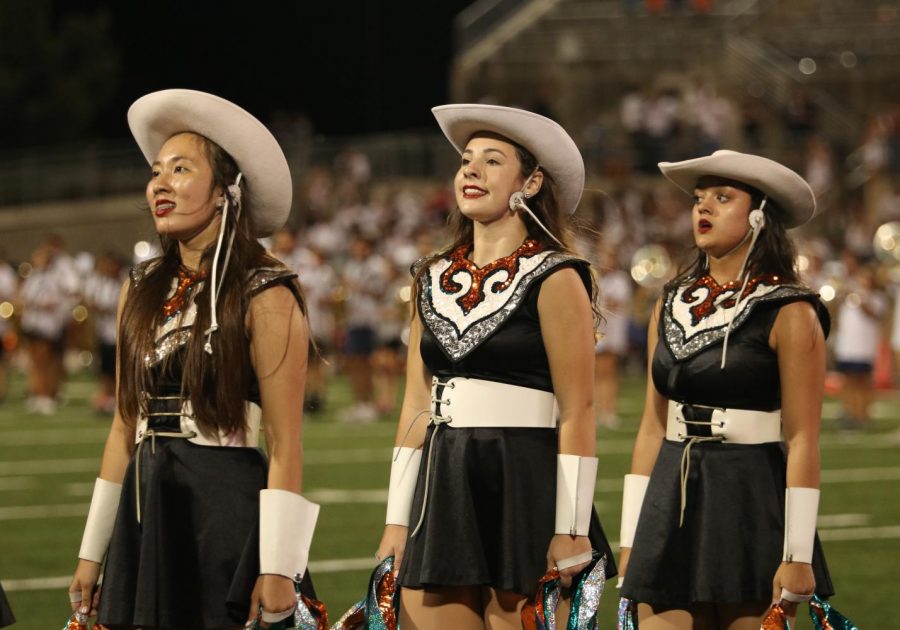 Susan Hamilton '23, Hannah Bresser '24, and Sophia Baruah '23 stand facing the Warriors home side. The SunDancers were performing alongside the Warrior band during halftime to get the crowd hyped up.

SunDancers are Westwood High School’s varsity dance and drill team that compete at an advanced level. They are a very community-oriented organization and thus perform at a lot of events across Austin. Practicing all styles of dance throughout the year, the SunDancers are known across the State of Texas for their advanced artistry and movement quality, as well as their team culture.

“The students gain so much more than dance skills,” SunDancer Director Mrs. Jessica Steedley said. “They learn how to be a servant leader that others desire to follow, how to work hard towards a goal that does not come easily, how to collaborate efficiently, how to take initiative, and so many more life skills that build character and integrity that they will take into adulthood. They make relationships that last a lifetime and can be a part of an experience that helps them develop great character during a very pivotal point in their life, high school.”

Performing throughout the year at pep rallies, basketball games, and varsity football games, they begin practice in the summer and end in late April, with no off-season.

“In the fall, we do a halftime performance at every Westwood football game. During halftime, we also get to do some different performances that are always fun, such as our sister kick with the McNeil Majestics, our family dance, and our SunDancer-For-A-Night dance with other young dancers,” Junior Lieutenant Carly Kienitz ‘23 said.

At the end of the year, they host a spring showcase known as Escapade where SunDancers, Warrior Pride, and the entire Westwood dance department get to present all of the dances that they have been working on throughout the year. All of these performances are open to the community to come see.

“We are also going back to our normal performance schedule. That means getting to perform at every football game and at other halftime events as well as having our Escapade performance in the spring,”  Kienitz said.

A difficult year for arts programs across the country, 2020 also deeply affected the SunDancers. Without the certainty of being able to conduct regular practices every day,  many accommodations were made with respect to COVID-19 safety guidelines. Most of their performances were canceled or modified, and in addition, they were not able to host their annual summer camp or perform at halftime shows.

“I think we struggled with what all of our community struggled with, uncertainty,” Mrs. Steedley said. “We were constantly rearranging as COVID changed and progressed. Dancing in masks, dancing outside for the first semester, not being able to physically touch while dancing, and distancing changed our entire way of performing and practicing.”

The members devote much time and effort into perfecting their dance skills and learning the new choreography, as they practice both during school and after school hours. Auditions to become a SunDancer are held before winter break and are conducted in front of a panel of judges. More information on the audition process can be found on the Westwood SunDancers website.

“The year was challenging for our morale because there were many discouraging moments,” Veronika Croan ‘22 said.  “However, the team used the struggles as an opportunity to truly form a tight-knit family. We loved each other through everything, and we became stronger and more grateful human beings because of it.”

Other than practicing, learning new choreographies, performing, and competing, the SunDancers also give back to the community by volunteering in the annual event known as Race for the Cure to support people fighting cancer by dressing up and cheering on the participants while they run. The team also has volunteer outings, performances at several nursing homes in the community, participates in donation drives, and hosts breakfasts for the teachers of Westwood.

“The two biggest community events we are doing this year are the Sundancer Dance Camp and our Sundancer-For-An-Evening event,” Kienitz said. “Our Sundancer Dance Camp is a day camp over the summer for kids of all ages. They get to learn dance skills and routines,  and perform them, while also being able to interact with the SunDancers more directly. This year, we are restarting our Sundancer-For-An-Evening event where young dancers get to attend a football game with us, perform at halftime, and sit with us during the game.”

Though the SunDancers are a very community-oriented organization, developing meaningful connections as a team goes beyond the time spent at practices and performances.

“All of the small things that build community within a team are coming back,” Mrs. Steedley said. “Plus, we have a brand new dance facility this year. We now have a beautiful, sufficient space that fits all of our dancers which will allow us to reach for new heights this year.”

As time progresses, they are also starting to head back to complete normalcy, meaning that they now have regular in-person practices every day in the morning and afternoon and have started to perform again.

“It’s been a tough adjustment because it is 10x the pace that we are used to, but I’m extremely impressed with this team and how they have stepped up to the challenge,” Mrs. Steedley said.

A special sisterhood is felt between the members of the dance team, as they consider each other family by learning from each other, interacting with the community, and upholding the responsibilities that each of them are given. The team focuses on a safe place for expression through dance, and promoting self-confidence and positivity.