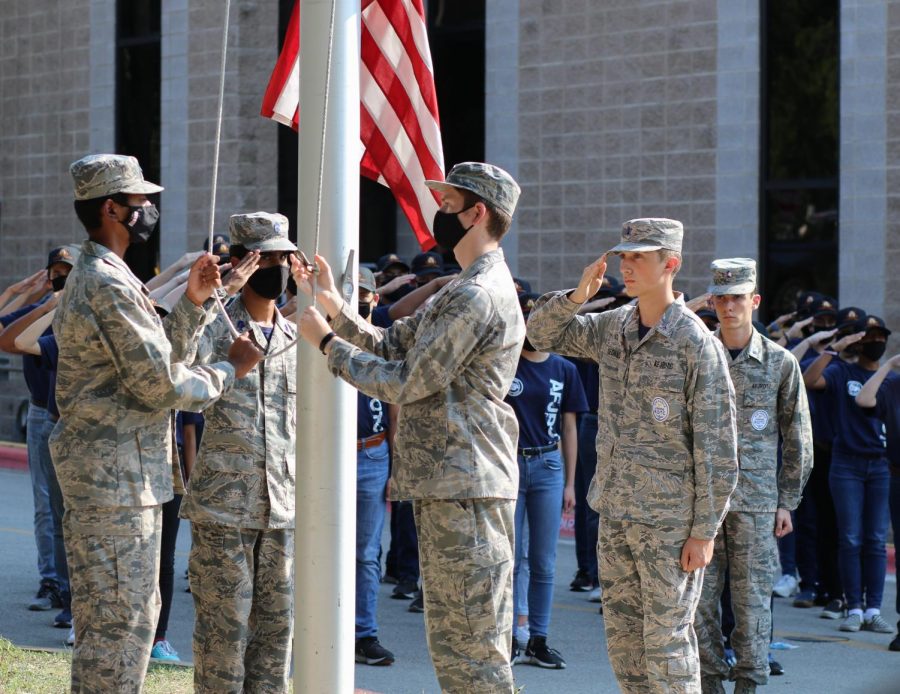 With cadets saluting in the background, Inesh Nambiar '23, Nolan James Sedillo ‘22, and Vikranth Srinivasan Ragavan ‘22 hoist the flag for JROTC's 9/11 memorial ceremony. The memorial was hosted to commemorate the lives lost in the infamous terrorist attacks all over the US 20 years ago.

In observance of the 20th anniversary of the Sept. 11, 2001, terrorist attacks and in remembrance of those who lost their lives, Westwood High school’s Junior Reserve Officers’ Training Corps (JROTC) hosted a memorial on Friday, Sept. 10.

“[The] memorial [was held] to remember the civilians and recognize the efforts of the first responders killed on September 11, 2001, during the Terrorist attacks on the World Trade Center, Flight United 93, and the Pentagon,” C/2nd Lieutenant Inesh Nambiar ‘23 said. “The TX-861st held a ceremony to honor those fallen on that day, and to lower the flag in remembrance of these heroes.”

At the event, numerous students, teachers, and parents were in attendance, including principal Dr. Mario Acosta and many other JROTC instructors.

The memorial included a formation march, ceremonial hoisting and lowering of the flag, singing of the national anthem, the pledge of allegiance, and a moment of silence to remember the first responders who died in the line of duty on Sept. 11, 2001. It was held in front of the main entrance of the school, where spectators gathered to pay their respects.

“We are very grateful for the opportunity to host an event like this because of its weight and importance,” Cadet Captain Veronic Croan ‘22 said. “The Westwood staff, teachers, and administration were not only incredibly supportive but assisted in any way they could. So, many thanks to them. We hope we represented [both] the Texas 861st JROTC Corps of Cadets and the Westwood community [well].”