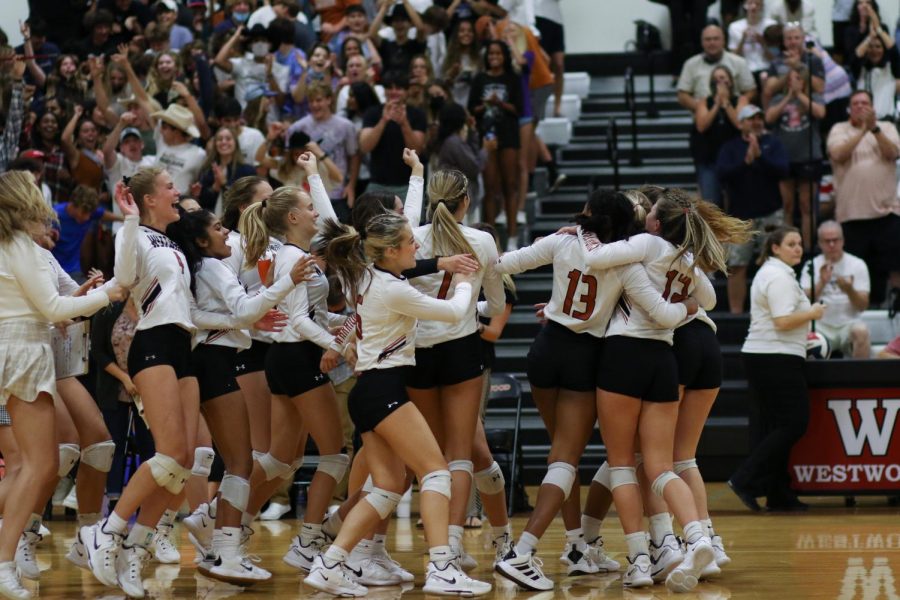 Running onto the court, the entire volleyball team celebrates their victory over the Raiders. The team won all three sets.

On September 24, the varsity volleyball team sweeped Cedar Ridge in an exhilarating three set match. The lady warriors had lost to Cedar Ridge in one of their previous tournaments, however they managed to come back strong a second time and secure the win 3-0.

Alex Kriz ‘23 led the ladies with 16 kills and also rocked defensively with 12 digs. Lola Fernandez ‘23 led with 17 digs, hitting her greatly anticipated 1000 dig mark, and Peyton Ferree ‘22 was close behind with 14 digs of her own.

The Lady Warriors fired off the first set with multiple hits, beginning the match with energy and excitement right off the bat. The other team managed to land some lucky hits, ultimately resulting in their lead throughout the majority of the first set. Halfway through, a phenomenal kill by Kriz made the student section go wild, boosting the team’s spirit. This kill marked the beginning of a multitude of points by Westwood, eventually putting them ahead 19-18. After a long rally at set point, the other team spiked it out, giving Westwood the first win 25-23.

At the beginning of the second set, Fernandez reached her 1000 dig mark, a remarkable milestone to be celebrated. The visitors and players alike showed noticeable excitement at the mention of this achievement.

“It feels amazing,” said Fernandez. “I really credit my whole team on supporting me on being the libero position and trusting me to direct the back row.”

The ladies left no room for error throughout the first half of the second set, executing brilliant blocks, kills, and digs. Their amazing start to the set put them at a significant lead in points, allowing for a clear path to win. The last half dragged on with back and forth points, however the set was finally finished 25-17 with an out of bounds hit by Cedar Ridge.

The third set began with great connection and energy from both teams, resulting in prolonged rallies. The first half of the set was neck and neck between the teams, neither showing any signs of backing down. Cedar Ridge eventually pulled ahead by six points near the end, putting Westwood in a difficult position. The ladies did not let this disadvantage get in the way of their playing, and persisted onward throughout the second half of the set. With numerous formidable kills, they eventually managed to tie the score 23. The teams continued scoring points back and forth, until finally a kill by Ferree ended the match 27-25.

The Westwood Lady Warriors have again proved their ability to show who they are and earn redemption. This three set win not only gave them revenge, but exhibited their unshakable mentality as well.

“It feels really good to come back and actually win,” said Peyton Ferree ‘22. “Especially in three sets because, we [were]  waiting for this game, our revenge game, to prove that who we were a month or two ago is not who we are today.”