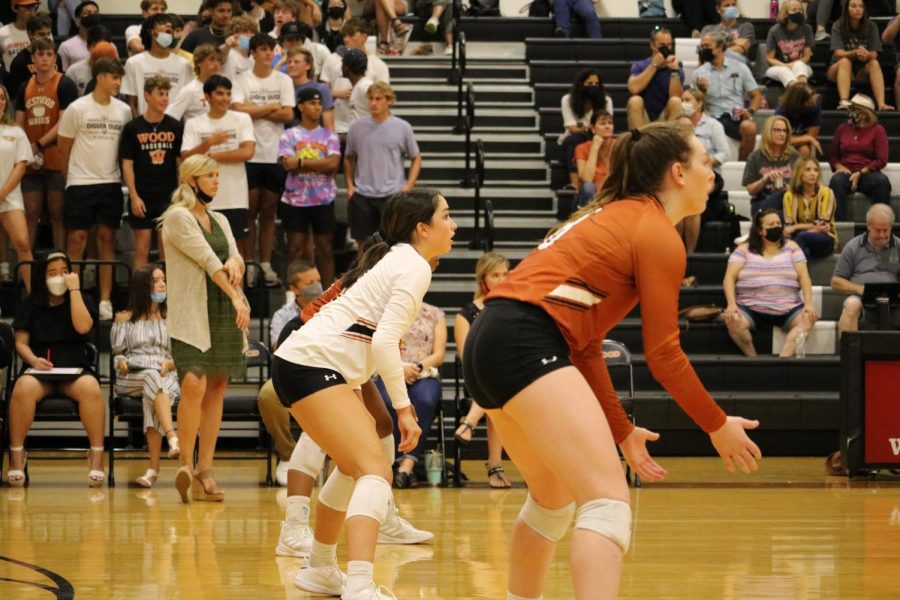 Dominating their second district game, the varsity volleyball team kicked off their official season with a 3-0 win vs Stony Point. Although they had lost to the Tigers in the Volleypalooza Tournament in late August, the Lady Warriors came back strong and merciless, earning back redemption.

¨It’s really what we are supposed to do in the first place,¨ Erin Fagan ’22 said. ¨In the Volleypalooza Tournament we came in thinking that they weren’t a good team which was completely wrong, we completely underestimated them and they took it from us like that so this was our chance to show them who we truly are and how we can come back like that.”

Peyton Ferree ’22 led this match with 12 kills, and came second defensively with a total of 17 digs. In addition, Fagan rocked the game with 10 kills of her own. In the defensive part of the game, Lola Fernandez ’23 led with a total of 19 digs. Another player deserving mention is McKayla “KK” Ross ’22, who had come back to play after nine months recovering from an injury.

“I’ve missed playing so much since it was such a huge part of my life,” Ross said. “I’m more eager to make a play now and I can’t wait to go back on the court every game. I’ve missed the crowd that we had, especially before covid hit, but it’s even better coming off of an injury. The support I receive is insanely amazing.”

The Warriors started the set with great energy and connection, putting them in the lead throughout the first half of the set. Stony Point eventually managed to catch up,tying the score 15. Phia Parent ’22 threw the other team off with a brilliantly executed setter dump towards the uncovered middle, putting them in the lead. Westwood led the entirety of the second half, and won the first set 25-20.

The ladies definitely carried on their energy from the first set to the second set. They led the first half of the set with many well-placed serves and kills. This set consisted of some very long rallies, however Westwood kept working and didn’t let their guard down. Ross and Fagan shut down the other team’s attacks with multiple amazing blocks. Both teams were neck and neck throughout the end of the set, however the ladies managed to nab the win 25-18, ending the set with an ace by Parent.

With a potential win in their hands, the Lady Warriors came on to the court with noticeable intensity, displaying their ready to play attitude. Throughout the majority of this set, both teams were earning points back and forth, their eagerness to win equally visible. Westwood´s defense made many great split second decisions to let the ball go out rather than keep it in play, which ended up putting them ahead near the end of the set. During the last timeout, overwhelmingly loud cheers ignited amongst the crowd, perfectly matching the excitement of the potential win. Finally, the match brilliantly ended 25-20 with a phenomenal ace by Ferree.

During this game the varsity team really proved what they can do, after all coming back and shutting a team out they had been previously been defeated by is no easy feat. They have kicked off the beginning of their district games in the best way possible, hopefully foreshadowing an amazing rest of their season.

¨I feel like we had a good team chemistry and we did well as a team,¨ Ross said. ¨We had a few slumps but we were able to push through them and finish each set, leading to our sweep.¨