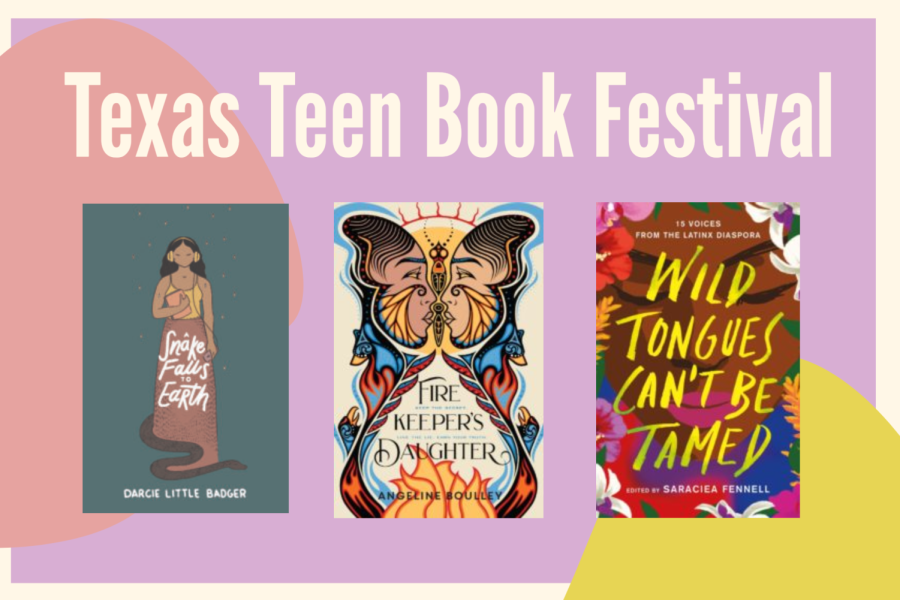 All the books featured in the festival are available for purchase on the Texas Book Festival website. Limited quantities of books with signed and personalized bookplates are also on sale. Graphic by Shreya Selvaraju.

The 2021 Texas Teen Book Festival took place virtually on Saturday, Oct. 23, and Sunday, Oct. 24. The festival had seven events on the first day and six on the next. The event, which occurs annually, is usually held at the Texas Capitol building but was modified to a virtual format due to safety concerns.

“[The Texas Teen Book Festival] celebrates the teen reading experience by inviting fans to engage with some of the most popular and critically-acclaimed young adult authors in the country,” the Texas Book Festival said on their website.

“I wanted to write this book to revisit these characters and let them grow up in this world and understand their place in this universe,” Sáenz said.

Aristotle and Dante Dive into the Waters of the World follows two gay Mexican-American teenagers during the AIDS crisis, and what their relationship means for them, their friends, and their families. Sáenz, who is Mexican-American himself, said that the book was written about America and how the country has and continues to struggle to improve, something he cares deeply about.

“I’m not less American, but I’ve been made to feel that way much of my life, which is sad,” Sáenz said. “There’s always somebody who says ‘America belongs to me, more than it belongs to you.’”

The theme of a culture’s intersectionality with identity was continued in a later panel discussion, about Wild Tongues Can’t Be Tamed, a collection of 15 individually written essays by Latinx writers. The essays cover topics like colorism, machismo, and grief. The panel featured Meg Medina, Cristina Arreola, and Jasminne Mendez, and was moderated by Saraciea J. Fennell, who edited the collection. The women talked about their respective essays, experiences, and how they chose what aspect of their shared culture to write about.

The second day of the festival began with a discussion about Living Beyond Borders: Growing Up Mexican in America, an anthology of comics, stories, poems, and essays. The book was created by 20 Mexican-American authors, four of which attended the panel: David Bowles, Margarita Longoria, Diana López, and Anna Meriano. They discussed Mexican-American representation and how it’s grown and changed generationally, as well as how it could continue to grow.

“Publishing does tend to flatten cultures all the time, and we see that most of the people that are Mexican American who are publishing look a certain way and have a certain background,” Meriano said. “We can always be doing better, and uplifting indigenous writers, Afro-Latinx writers, and Afro-Mexican writers.”

Later in the day, keynote speaker Angeline Boulley spoke about her book Firekeeper’s Daughter. The book is centered around an Anishinaabe teenager as she investigates a string of murders in her small town while navigating her mixed-race identity. Boulley, who is indigenous herself, said she was inspired to write the story after reading a book in her senior year of high school. The book, Stranger With My Face by Lois Duncan, was the first book she’d ever read with an indigenous main character. What turned Boulley away from the book was how it didn’t reflect her own Ojibwe heritage.

“It played into stereotypes and the representation wasn’t good. I didn’t have the words at the time to understand why I was unsettled by it,” Boulley said.

The last event of the night was ‘Native Heroes, Native Stories, Native Voices.’ The event featured Darcie Little Badger, and Anton Treuer, two indigenous authors who were joined by Boulley in a discussion about stereotypes around indigenous culture, navigating your youth, and being underrepresented in media.

Paralleling what Boulley said earlier, Treuer told a story about how his culture made him feel like he had to be extraordinary to be acknowledged, and how he found that gently educating people and showing them what indigenous experiences were actually like was what he felt passionate about.

“If you’re a reader and you’ve ever dreamt about writing, write that story that you wish teenage you could’ve read,” Boulley said.

The Texas Teen Book Festival uplifted many authors from marginalized communities and displayed how being Texan has many different meanings. The streams from all 13 events are now available on the Texas Book Festival website.