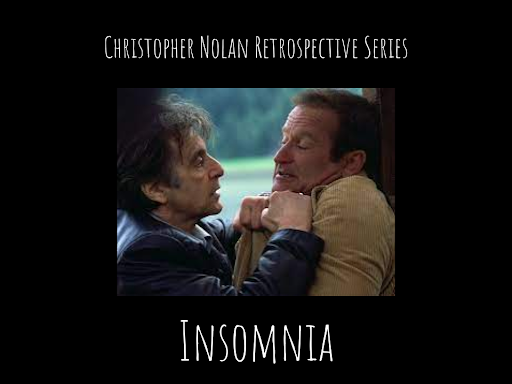 This piece is part three of a six-part series. Read the second installment here.

Finally, a Nolan film in the correct chronological order. Right after coming out with a film with a moral basis hinged on truth and lies, Nolan’s Insomnia is a piece that will look to connect with audiences on the exact same level.

Insomnia was released to general audiences on May 24, 2002 and is the first film directed by Christopher Nolan that is not an original story concept of his, or his brother Jonathan.  Instead, Insomnia is the adaptation of a 1997 Norwegian film, also called Insomnia. Expectations were extremely high after Nolan’s Memento two years previously, and I think what we get sufficiently meets those expectations.

Insomnia follows the story of LAPD detective Will Dormer (Al Pacino) as he and his partner Hap Eckhart (Martin Donovan) and a young local detective named Ellie Burr (Hilary Swank) travel to Nightmute, Alaska to investigate the murder of 17-year-old Kay Connell. Burr turns out to be a fan of Dormer’s work, but she is one of few that actually do. Many people are beginning to see Dormer as corrupt due to some of his recent cases, and Eckhart is even ready to testify against Dormer to get himself out of legal trouble.

As Dormer and Eckhart begin their investigation, they track a man they believe to be Connell’s killer into a foggy forest. Dormer fires a shot in the fog believing to have apprehended the suspect, but finds to his horror that he has shot and killed his partner instead. This presents a problem for Dormer. Because Eckhart has promised to testify against Dormer, Dormer knows quickly that internal affairs will see this as foul play, and most likely convict him. When Dormer is given the bullet that killed Eckhart, he switches the bullet of his nine mm slug with a .38 bullet from a dropped gun in the forest.

A big question that people seem to associate with this film is asking whether Dormer killed his partner on purpose or whether it was really an accident. I never thought that Dormer killed Eckhart on purpose and I don’t get how other people could see that either. Even though Dormer was trying to cover up his actions, his actions seemed too hasty and panicked for it to really be on purpose. If this death was something Dormer had planned on then he chose a really needlessly complex plan to kill Dormer.

Dormer spends his next few days trying to locate the killer. Upon investigation, Dormer and Burr find that Kay had built a close relationship with local fantasy writer Walter Finch (Robin Williams). Dormer attempts to confront Finch, but Finch anticipates his approach and escapes. While at Finch’s apartment, he plants the .38, hoping to frame Finch for both the murder of Kay Connell and the murder of Eckhart in the forest. Finch quickly realizes what Dormer is up to and arranges a meeting on a ferry, to which Dormer agrees.

While on the ferry, Finch admits to the murder of Kay Connell, telling how he beat and strangled her out of anger when she refused his sexual advances. But Finch has an ace up his sleeve. Finch reveals that he knows that Dormer killed his partner. However, Finch has a solution that he believes will please both parties. In exchange for knowledge of how to get past the police questioning, he will keep his silence about Dormer shooting Eckhart, and Dormer will be able to pin the murder on Kay’s abusive boyfriend, Randy Stetz. To make sure that Dormer keeps his word, Finch makes a recording of the conversation. Dormer makes good on his word and the gun used to kill Eckhart is planted in Randy’s apartment which gets him arrested.

In the midst of all this, Dormer finds himself being affected by insomnia due to both the guilt of Eckhart’s death and the constant light that is prevalent in Nightmute. Additionally, Dormer’s visible discomfort and disregard for aspects of the case is making Burr increasingly suspicious of Dormer’s motives and actions. Burr begins further investigation on Eckhart’s death and finds a 9 mm casing at the scene of the crime, the same kind of casing that she knows is in Dormer’s gun.

On Dormer’s final day in Nightmute, he realizes that Finch has made a plot to kill Burr by inviting her to read letters that Kay had sent her. Finch knows that Burr has caught on to Dormer’s deception, and is likely going to confront him. Dormer races after Burr, arriving just as Burr is knocked unconscious. A battle ensues between Finch and Dormer, ending in Finch and Dormer shooting each other. Finch dies immediately and Dormer is fatally wounded but still alive. By this point, Burr has awakened and is with Dormer in his final moments. Burr reveals that she knows of Dormer’s deception, but as she moves to throw away the evidence to save his reputation, Dormer stops her. In Dormer’s final moments he encourages her to stay true to her morals and not make the same mistakes he did, and with his conscience eased at last Dormer dies a noble death.

There are plenty of good things to talk about with Insomnia, but I want to start with a major annoyance I had first. This film is way too tidy in the way it wraps up. Ellie Burr’s entire character arc relies on her acceptance that the cop she has looked up to is corrupt and that she should strive to not be like him. It is evident that this arc loses motivation in the end. Without Dormer’s very sudden confession, she would have also turned corrupt and followed in Dormer’s footsteps. It’s a very convenient change.

Dormer’s abrupt character resolve is also not very satisfying. Dormer essentially goes from being the bad guy, to being the savior of Ellie, to being dead in about twelve minutes. Other than a couple dry line deliveries from Al Pacino at the end of the film, we get almost no indication that Dormer’s character has undergone any sort of change. One could argue that his death is penance for his past actions, but I would have preferred to see the arc completed instead of being hastily cut off.

There are quite a lot of things that Insomnia does extremely well. This film is thematically stimulating. The most interesting conflict to analyze is the morality of throwing Randy under the bus for a crime he didn’t commit. Obviously, the correct moral choice is always to punish those for the crimes which they are responsible for committing, but as Finch is quick to point out, his intention was never to kill Kat and after all, he did love her. Randy is also far from innocent. As a high schooler, he smoked and got into trouble, and from all reliable accounts, he treated his girlfriend horribly. This example and really everything that Dormer is accused of brings up one main question. Is it really so bad to alter the truth if the people getting punished, if not guilty of that specific crime, are justified in finally getting punished for their other poor choices? If this film was not so hastily concluded we would have had more time to answer that question.

This film’s ending may be messy, but other than that, Insomnia has a lot of good things going for it. Robin Williams as Walter Finch was a questioned casting move at the time and I think it paid off very well.  The calm, sinister demeanor and creepy aesthetic of Williams’s emoting perfectly complements a rather dry performance from Al Pacino.

There are many quotable lines in this film, the most popular one being from Ellie Burr, “A good cop can’t sleep because he’s missing a piece of the puzzle, and a bad cop won’t sleep because his conscience won’t let him.” This quote and the whole screenplay in general run very well with the whole theme of grappling with truth and lies. Dormer’s actual Insomnia is more of a metaphor than anything and it’s represented by this quote. The motif of distinguishing between truth and lies/right and wrong is something that Nolan has a tendency to use, incorporating compare and contrast elements in his film. This can be seen in Batman Begins where Nolan explores two very radically different ways of dealing with crime. Is it better to completely purge societies because of their sins or should they be allowed to move through the hands of a justice system? This film is a great usage of thematic symbolism by Nolan, and something that he will use even more in his future films.

This film may not have the cleverness of Following and it’s certainly not the masterpiece that was Memento, but I am still going to recommend Insomnia. The thoughtful themes along with a good script and a well acted antagonist make this film a joy to watch.