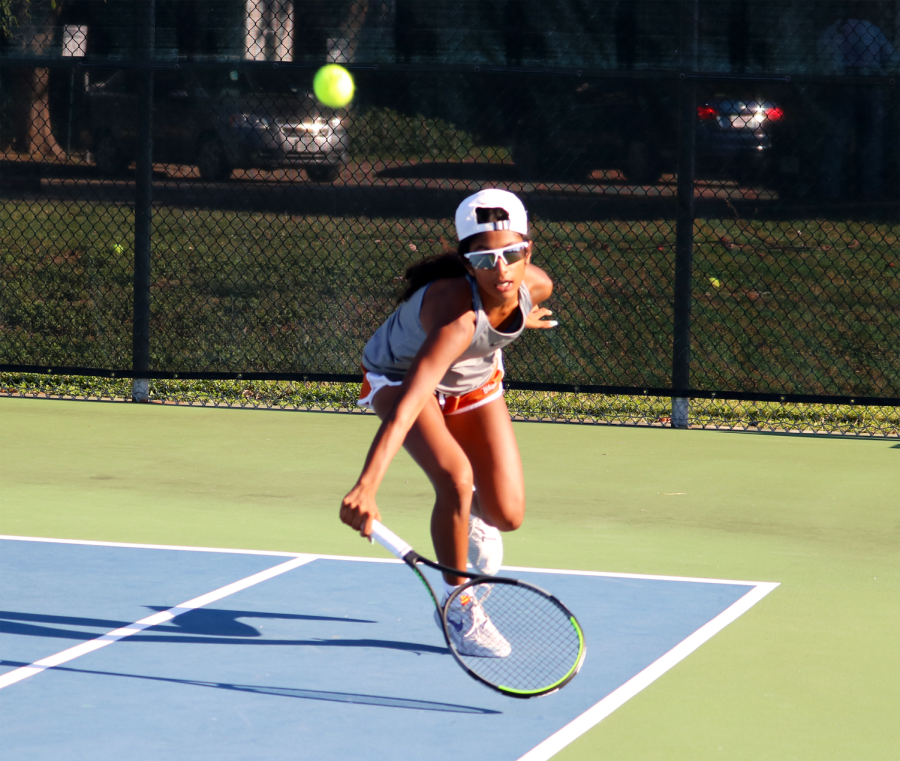 Strained to the outer edge of the court, Simryn Jacob '24 dives to catch the ball. Jacob would later prevail in her singles match 6-0, 6-1.

Marked by a glittering composure, the poise of a racket wielded in ready position could not be miscalculated, with players’ stoic gazes feeding an intrepid energy resurgent at every stage of the match. Besting the McNeil Mavericks, the varsity tennis team would secure a 10-0 district semi-final win on Monday, Oct. 4.

A dynamic, expressive aggression enthralling to watch was mellowed by way of an elegance imparted through stylistic stroke choice, ornamenting continually stressed fundamentals of the game. Thinking forward to the bulk of the fall season, Finnegan Tankersley ‘23 and Aadhi Raja ‘23 collaborated to synthesize a performance of mutual strategy, coming out on top 6-2, 6-2 in boys doubles.

“Aadhi and [I] have been playing for three years, and we’ve known each other for a while, so there’s a deep connection there,” Tankersley said. We know who our competition is [coming up]. Westlake and Lake Travis have great players, and we just have to [be] at that level all the time.”

Bolting to brush balls with a feathery precision, an onslaught of point consistency brought celebrated success. Accentuated by the squeaking, metronomic cadence of shoes, the rhythm amounted to a familiar forte when players turned to fire a spiritedly infectious fist pump before returning back to the baseline, back to business. Line one partners Kinaa Graham ‘23 and Simryn Jacob ‘24 ended in triumph 6-0, 6-0, with duo Dana Kardonik ‘24 and Anwitha Duduka ‘25 later taking another firm victory of 6-1, 6-0.

“It maybe wasn’t one of our strongest opponents, so we were preparing for what we need to do when we play better teams,” Graham said. “It was good to practice our poaching at the net [and] our work on groundstrokes. [Simryn and I] understand each other on the court, so our communication is really good.”

Pristinely attentive footwork, an extension of the steadfast focus preserving a driving agility, dictated a springing pace that led players across the expanse of the court, sustaining a momentum to plant availing counterpunches. Rishika Vemulapalli ‘22 and Kyle Grimes ‘22 would trounce their opponents 6-1, 6-1 in mixed doubles.

“We have good chemistry, so we know where [we] are always going to be,” Grimes said. “We’ve been winning every match, [and] in practice, I’m always just thinking [about] how I’m going to play. I’m always moving in off my return, [and] trying to get that first hit.”

Skillfully advancing forward to find an opening to pounce, searing volley shots formed a climactic resolution to succinct ball exchanges with a steely edge. In singles, Aashish Dhanani ‘22 would take his match 6-0, 6-1 and Rohith Gajjala ‘22 closed out the evening with a 6-1, 6-0 win.

“It’s my first season that I’ve been playing regularly on the lineup,” Gajjala said. “Staying aggressive is all about footwork. After you hit the first ball, you need to get set up for the next one.”

For team newcomers, becoming accustomed to such a tight-knit sense of community is second nature. Emblazoned by a prevailing spirit of connection, such ideas can be seen bolstered through supportive quips and mid-match enthusiasm to stress a renewed focus on the task at hand.

“They did a good job of capturing the net and taking the advantage as quickly as they needed to be to make sure there was no doubt left in the opponent’s minds,” head coach Travis Dalrymple said. “We do a lot of team bonding activities [because] chemistry is very important. Not only are they going to get together for their tennis game to match up, but their mental games have to match up to do well.”

The Warriors will play in a bi-district matchup in the next week to begin the path to the state tournament.