Jumping to the Future: Middle Schoolers Participate in Cheerleader Clinic 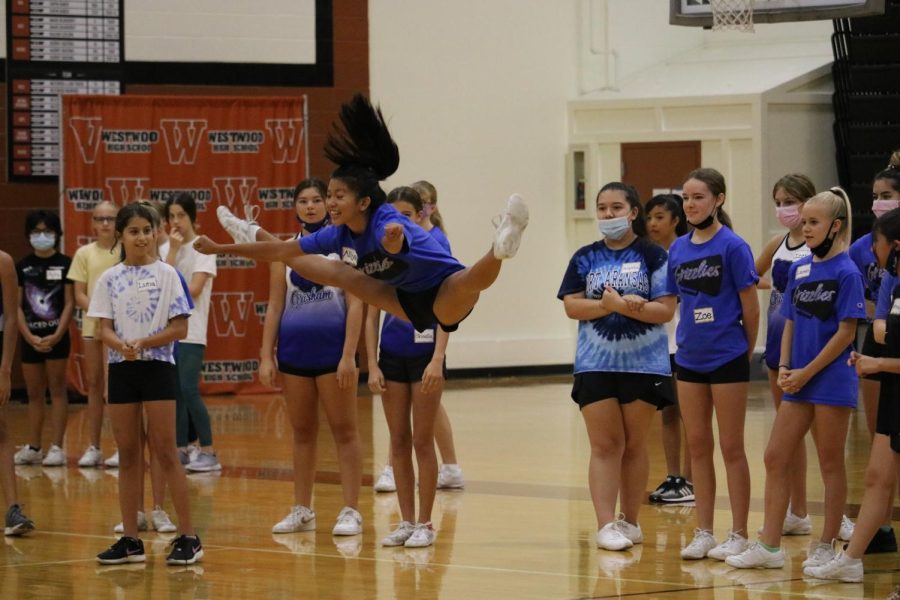 Middle schooler and future warrior Aliya Yu shows her outstanding jump to the rest of her friends after introducing herself. "Just being in the environment is really cool," Aliya said. She is more than excited to try out for the cheer team next year.

Future warriors met in the Westwood gymnasium on Saturday, Oct. 23 at 9 am to meet their cheer role models. Current Westwood cheerleaders helped give the rising high schoolers confidence and allowed them to practice leading Westwood chants. The clinic was for middle schoolers from Grisham Middle School and Canyon Vista Middle School with little to no experience in cheerleading.

“I liked learning [everything],” future warrior Olivia Ochoa said. “I just like cheering and supporting people.”

The clinic began with a group stretch led by one of the team captains. Once everyone was loose, each future warrior introduced themselves followed by a signature jump or trick. Later on, the students were divided into three groups that provided one on one practice with the cheerleaders. They went over form and helped anyone that was struggling to keep their balance.

“I’m very excited because they’re really good,” cheerleader Mia Serpas ‘24 said. “I can’t wait to see their growth, if they do join Westwood cheer or tryout. I can see a lot of potential in them.”

After creating a solid foundation, the students learned the choreographed routine to Westwood Band’s famous Sweet Caroline. They started the dance with toe touches, then swung their arms around while jumping into a series of intricate steps. They also performed many kicks and steps in all directions throughout the routine.

“I liked learning the dance,” future warrior Isabella Cunningham said. “It just seems like something really fun that I am able to do.”

At the end of the clinic, the entire group of future students performed the new choreography for all their parents to see. With only a couple hours of close direction, they felt accomplished and positive toward their future in cheering.

“I really liked it because I get to see what it’s like being a Westwood High School cheerleader,” future warrior Aliya Yu said. “Just learning all the cheers is really cool.”