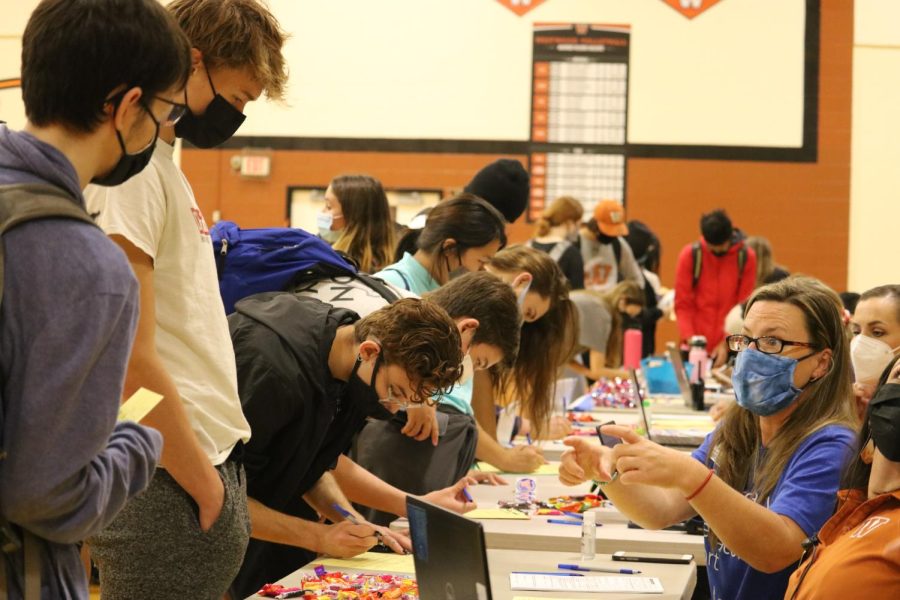 Seniors 17 years and 10 months or older line up to register to vote for the first time. Their vote will be essential to the upcoming vote on proposed changes in county, city, and state governments. "Everyone should vote so that everyone's opinion matters," Bryan Groves '22 said.

County, city, and state representatives visited the school on Friday, Oct. 1 during Flex to inform seniors about the importance of voting and allow them to register if they were old enough to do so. The mandatory session was held in the Field House, and included a short slideshow, speeches from all the representatives, and a brief video to help seniors understand the specifics of voting in Texas.

“In the United States, there’s a law that we make the attempt to register as many qualified voters as possible,” Principal Dr. Mario Acosta said while speaking to the senior class. “[And] one of the most important things we have is the opportunity to vote and [have our] voice [be] heard.”

Austin City District 6 Council Member Mackenzie Kelly, Williamson County Commissioner Terry Cook, Texas State Representatives John Bucy III and Vikki Goodwin, and the League of Women Voters were all present at the session. Each representative discussed distinct proposals to be voted on in November of this year.

“One of the new constitutional amendments [proposed] says that in the future, in other situations like the one we’re in right now, churches [and] physical care service centers would not be banned,” Representative Goodwin said. “So that’s for you to weigh. Is that a smart thing to do or not a smart thing to do?”

A total of eight Texas constitutional amendments will be proposed this year, including the exemption of religious service centers in future crises that Representative Goodwin mentioned. Some other potential amendments will allow charitable raffles at rodeos, authorize counties to raise money for road improvement, and refine the judge selection process. New high school voters can influence the passage of any of these amendments starting with early voting on Monday, Oct. 18.

“One way to weigh both sides of an issue is to go to vote411.org,” Representative Goodwin said. “They will have all the pros and cons of every issue, and it’s a nonpartisan organization that has all of this information ready to read right away.”

After the representatives spoke, seniors at least 17 years and 10 months of age were allowed to register to vote. Many seniors registering believed that voting will allow them to express their opinions and contribute to societal change.

“I think it’s really important to get our voice out and have a say about what’s going on in politics,” Aiden Carr ‘22 said.

The new student body of registered voters will be able to participate in the voting for proposed changes in Texas, Austin, and Travis and Williamson county governments. For more information about any upcoming voting issues, visit this website.

“It’s important to vote because otherwise you won’t get a say in what’s going on,” Grace Li ‘22 said. “Basically speak now or forever hold your peace.”