Varsity Volleyball Gets Burned By Round Rock 3-1 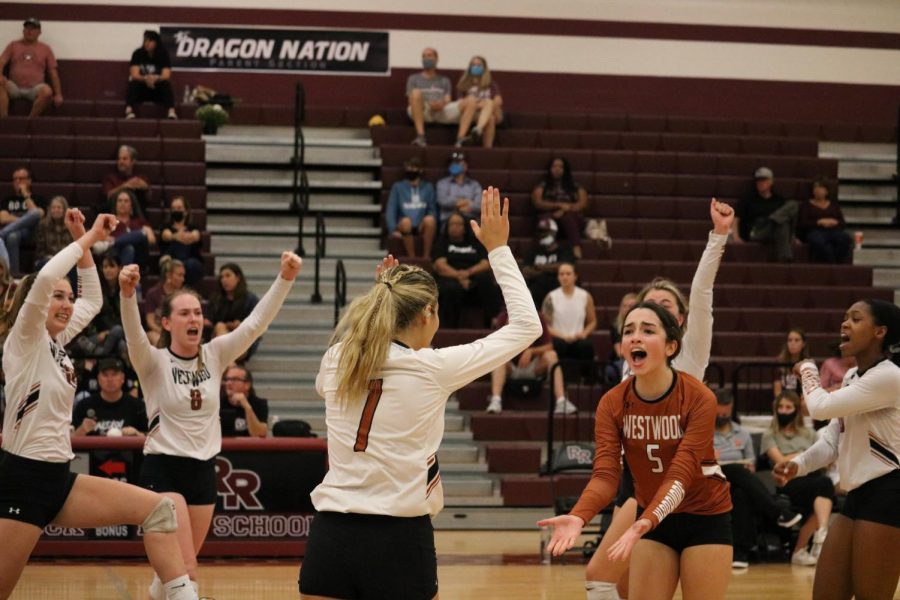 In a celebration, Lola Fernandez '23 high fives Alex Kriz '23. After each play the team came together to regroup before starting again.

In their last game before playoffs, on Tuesday Oct. 26, the varsity volleyball team fell victim to Round Rock in a 3-1 loss after four hard-fought sets.

“My regret is not winning but that’s the big picture. You can’t control the little details of the story. ” Erin Fagan ‘22 said. “Overall I think we did really well. [Round Rock] is a good team, they always have been and it was going to be a good game. We could have pushed it to five sets but that’s how it went.”

Alex Kriz ‘23 started the game off strong, hitting the ball to Round Rock who failed to return it, sending it into the net for the Lady Warrior’s first point. Kriz then blocked the ball earning the second point of the game before Trinity Woods ‘23 scored the third, receiving the ball from Phia Parent ‘22 and earning a lead for the team. The Dragons clawed their way back however, matching each point with their own and fighting to snatch a narrow lead. After a nail-biting period of point scoring with both teams grappling for the win, Westwood took the first timeout with Round Rock leading 13-9. A rousing comeback paved by points from Fagan, Peyton Ferree ‘22, and Kriz tied up the match with the teams desperate to take the final two points for the first win. With the whole gym amped up, Ferree solidified her team’s win with a powerful kill, claiming a 27-25 score for the first set and setting the Warriors off in cheers.

“It was the beginning of the game, it was a fresh start, and we had nothing to lose,” Terin Score ‘23 said. “The next couple of sets we got more in our heads and down on ourselves. We were thinking too hard about trying to do the perfect thing and play the best we could possibly play. In the first set we were just having fun and there was a lot less pressure on ourselves.”

Unfortunately for the Lady Warriors the second set didn’t go as they would have liked despite a promising head start of 4-2. The Dragons fought tooth and nail, tying the score before inching ahead, keeping that lead for most of the set. Despite digs by Lola Fernandez ‘23, sets by Parent, and spikes by Ferree, Round Rock maintained their lead going into a timeout mid-set with a score of 17-9. After several minutes of action, a kill by Claire DeLane ‘23, her first of the game, brought the score to 24-15 before a last Round Rock point ended the set 25-15.

Ready for a comeback, Kriz opened the third  set of the game with a statement, spiking the ball for a point. After a long back and forth with both teams stealing the lead, McKayla Ross ‘22 and Parent blocking, and Fagan pulling fast hits, the Lady Warriors managed to tie up the set. A long scoreless period between the two sides ended after a particularly spectacular save by Kriz proved to be in vain as the Dragons returned the ball for a point, bringing the score to 13-12 before the Warriors tied the game again. With the energy building, both teams scrambled to hit 25 points, desperate to win another set. However, while the Lady Warriors fought their hardest, the Dragons gradually increased their lead eventually winning the third set 25-19.

Desperate to push the game into a five set match, the Lady Warriors struggled to come back against the 2-1 lead that Dragons had attained. And while the team had its moments, the Dragons kept a hold on the game eventually winning the set, leaving the Warriors to suffer a devastating 3-1 loss going into playoffs.

“I’m pretty satisfied with where we placed in playoffs. I think we played well against some pretty strong teams, but I think we could have played better and possibly placed better. The two teams above us are pretty strong,” DeLane said.

The Lady Warriors first round of playoffs is still undecided for the time being.