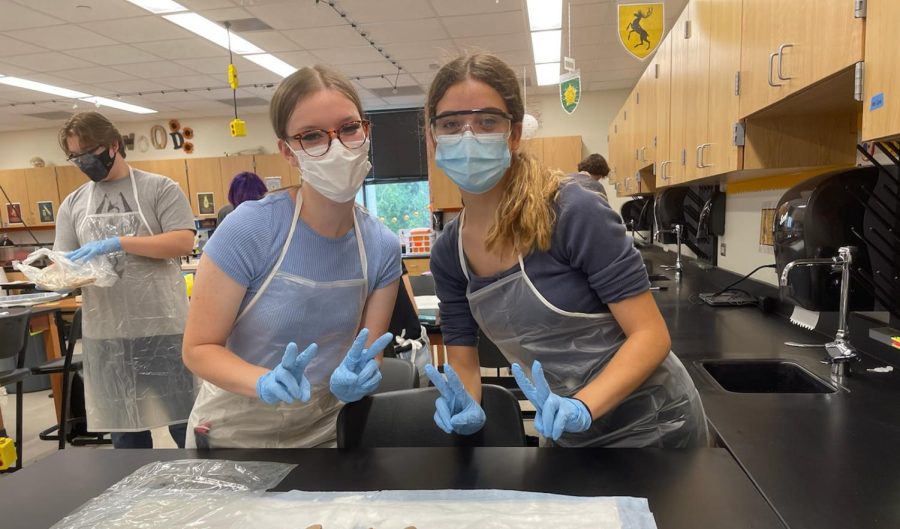 Aubrianna Carter '23 and Lucia Santaolalla '22 pose with their safety equipment on the first day of the lab. The students were required to wear it at all times.

After studying intently about Death and Decomposition, Forensics students began a new lab on Friday, Oct. 30 – the autopsy of a pig.

“We are doing the Death and Decomposition unit in forensics, and it is really hard to do a hands-on lab that would involve something being dead and rotting in front of us in a school setting,” Forensics teacher Ms. Shawn Bittick said. “So, I was trying to think out of the box, something we could do as a project grade.”

The lab consists of different parts in order for students to learn the full process of a human autopsy step by step and see what it is really like. Since the anatomy of a pig is really similar to that of a human, Ms. Bittick decided to use newborn pigs. The class was divided into working groups. Each group received a box with protective goggles, an apron, and a pair of gloves.

“My favorite part of the project was being able to work with my group and really learn more about the anatomy of a pig and figure out how to do a dissection. I’ve never done a real dissection before,” Abiha Zulfiqar ‘22 said. “I really liked it. It is nice that Mrs. Bittick is willing to spend this much money on the project.”

Several Forensics students have viewed this autopsy as a chance to learn, taking advantage of the detailed process involved. Many students who are interested in pursuing medicine in the future thought this was a really good opportunity to see if they were willing and could handle being in the medical field or not.

“In this project, we have learned a lot of important things.” Hank Martin ‘22 said. “We have learned where the different organs of a pig are located and we are going to learn even more stuff in the next days like [determining] how the pig died.”

Students were required to conduct themselves with respect during the process of the autopsy. The class is looking forward to learning more about Forensic science and being able to work on more labs and group projects to expand their knowledge.

“I think, for the most part, the students are doing amazing. A lot of them are learning to get over some fears and anxieties they’re having about dissecting a mammal,” Ms. Bittick said. “ This is totally normal. A lot of students who thought they were going to observe actually decided to put gloves on and try it. That was really exciting for me because I feel like they are opening up.”