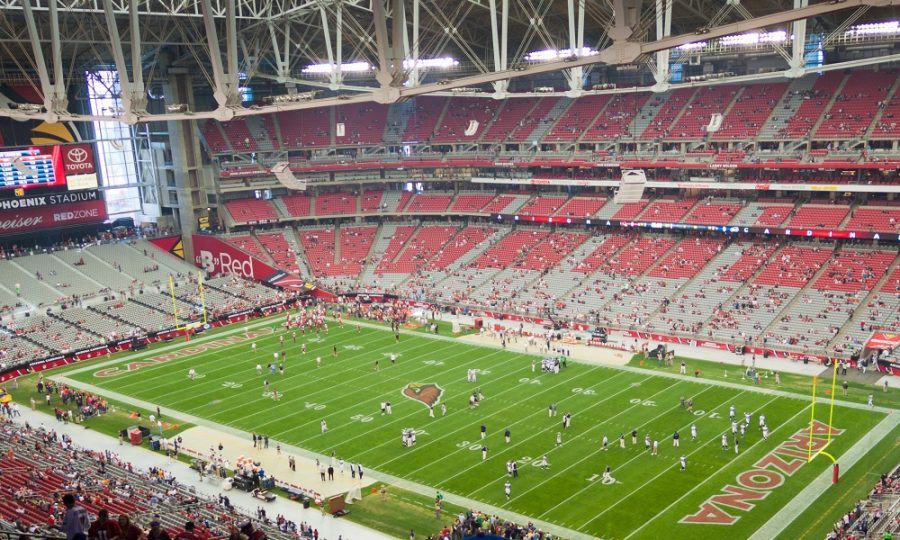 Even with superstar quarterback Kyler Murray out with injury, the Arizona Cardinals still managed to pull a strong performance out of both the offensive and defensive sides of their team to keep them as the only team with just one loss.

Baltimore continues to be the team with the most impressive comeback ability, securing close fourth quarter come from behind wins against the Indianapolis Colts, Kansas City Chiefs, and most recently the Minnesota Vikings. This new identity should result in a very exciting postseason for the Ravens.

Losing one of the best quarterbacks of all time to an injury shows how truly weak this offense is without Aaron Rodgers in the lineup. Given that Rodgers will likely be gone by the start of 2022, the Packers need to make sure they invest in a future that does not lean on former first round pick Jordan Love.

Derrick Henry’s seemingly impactful loss made little to no difference against the Los Angeles Rams. The Titans looked dominant on defense as well as offense, and Adrian Peterson looks like a staple if not a fix of the running back position in the interim.

Back to back interceptions that went for touchdowns by Matthew Stafford is highly troubling, but it’s also the only occurrence of something even resembling that type of a collapse this season. Los Angeles should still be expected to roll into the playoffs and do some serious damage.

The Cowboys’ most recent loss against the Denver Broncos was the first example of a bad Cowboys’ offense after weeks of dominant play, especially against seeming juggernauts in the New England Patriots and Los Angeles Chargers. This seems highly unlikely to continue in future weeks, but it is a development to keep an eye on.

At what point does Tom Brady finally start showing signs of age and lead a team to a sub .500 record? Clearly not this year because the Brady-led Buccaneers still look like the runaway team in the NFC South, and one of the top contenders for the Super Bowl.

The Patriots are the best team in the AFC East, and once again their play is making the rest of the NFC East look weak by comparison. The Bills are frankly a team that is posing after having one of the easiest schedules in the NFL, and the Jets and Dolphins combine for four wins after nine weeks of NFL games. Bill Bellichick is finally proving what smart fans already realized, Tom Brady and Bellichick both still are extremely incredible with or without one another.

Even after losing their first two first round picks of 2020 and their head coach to controversial incidents, the Las Vegas Raiders look like one of the best teams in the AFC and the clear favorite in the AFC West despite their records looking so close.

The Bengals looked powerful for the first few weeks of the season, but since their loss against the Jets they have struggled both to move the ball as efficiently as before and to stop anyone on defense including the New York Jets. Especially in a tough division, the Bengals need to have some good play to save their season.

Since their incredible offensive performance against the Cleveland Browns, the Los Angeles have had struggles that consist of but are not limited to losing against the Baltimore Ravens and Los Angeles Chargers in back to back weeks, average to poor quarterback play, and an underperforming defense. Los Angeles has the potential to improve, they just need to put the pieces together.

Buffalo has officially started underperforming after a 9-6 loss to the two-win Jacksonville Jaguars who made the Bills look like a preseason team. This game makes a convincing argument for those who might argue that the Bills are only at the point they’ve reached because of the ease of their schedule.

The Steelers might have gotten lucky with what was arguably one of the worst calls of 2021, but that does not change the fact that they did an excellent job of closing out their matchup against the Chicago Bears who had a late game offensive spark.

The Saints are exceedingly lucky to have two backup quarterbacks who you could absolutely win games with. Trevor Siemian is a tried and tested game manager who just needs suitable talent around him to make good decisions and is a relatively mistake free quarterback. Meanwhile, Taysom Hill brings the athletic side that you can move around the field

Cleveland may still have a ways to go to be a convincing presence in the playoffs, but a win against the Cincinnati Bengals, which featured a rejuvenated Nick Chubb and the release of Odell Beckham, should both be massive contributors to any potential success in Cleveland.

Kansas City may be back to winning games, but it is in the most disappointing way possible. The offense has delivered two back to back duds while the defense has stopped the likes of the New York Giants and the Jordan Love led Green Bay Packers. Not exactly Super Bowl defenses.

The Colts may be slowly climbing back to relevance, but with so many wild card hopefuls in the AFC’s North and West divisions, Indianapolis will have to pull some amazing games out of nowhere to make it into the playoffs.

A win may be a win, but I would not hold the Broncos to as high hopes as some people may want. Let’s not forget that the offense has been stagnant far more than it has been quick and punishing, and the defense is still one of the most injured units in the NFL.

The sole team remaining at .500 seems perfect exactly where they are. Atlanta is neither strong nor weak on offense, and has stopped enough good teams on defense to be relevant, but has given up too many massive amounts of points to be considered talented. There is potential, but not for this season.

Never underestimate the power of a franchise quarterback. The Seahawks may have one of the best quarterbacks of all time re-entering the starting lineup, and this means that all the close games that the Seahawks have lost because of Geno Smith should soon be translated into wins if history holds true.

Minnesota is a team that like the Falcons has visible offensive potential, but can seemingly never put the pieces together. This starts at the quarterback position, where Kirk Cousins seemingly does not have the talent to string together a truly dominant offensive performance. Add to that the possible loss of Dalvin Cook, and the Vikings would have to lean on one of the best wide receiver duos in the league to carry the Vikings to get wins.

How much does the Cam Newton signing affect the Panthers? It’s such a massive upgrade on Sam Darnold that it’s hard to believe that they didn’t do this two weeks ago. Inserting Newton into a system that he’s familiar with and a team he’s seen success with is a far more effective strategy than continuing with a quarterback who is clearly a draft bust at this point.

The Giants seem to be picking up some amount of offensive steam, but that does not change the fact that nearly every offensive aspect of this team has been highly disappointing. The Giants have been very lucky to get the three wins that they have, and this season proves that the Giants are still an off-season away from any sort of success.

Credit should be given where credit’s due to Kyle Shanahan for trying to squeeze some life out of a 49ers team that is constantly either dealing with injuries or underperforming talent, but at some point the front office has to pull a consistent team together for Shanahan to coach.

Weeks of harping on the Eagles defense will continue, but the offense should not go without receiving some level of blame. Jalen Hurts has not exactly screamed peak efficiency as the starting quarterback as of late, although general manager Howie Roseman has not exactly built a good team for Hurts to spread the ball to.

Chicago almost walked out of Pittsburgh with a win, which would have been huge for the NFC North race. I think it’s extremely promising for the Bears that Justin Fields is showing very clear vision at the quarterback position after weeks of disappointing play.

Obviously the Jets have seen some good luck with how their backups have turned out, but other than that everything else seems to have completely collapsed for New York. A slightly promising defense has looked awful recently, especially against the Colts, and the running and receiving game have had moments, but that’s about it.

With Tua Tagovailoa once again in and out with injuries, Jacoby Brissett will continue to lead a low scoring Miami team to consistent losses against better offenses.

Taylor Heinicke’s fall from grace was eventual, and now it’s here. With Heinicke not playing well, there’s pretty much nothing to be excited about with Washington besides the defensive line featuring Jonathan Allen, Chase Young, and Da’Ron Payne.

Jacksonville was exceedingly lucky to escape from Buffalo with a win, particularly after kicker Matthew Wright missed four field goals in a row. Apart from James Robinson, there is nothing exciting about this team, and this season shows that the Jaguars are very far removed from being competitive.

It’s not time to hit the panic button on Tyrod Taylor. Remember that this is his first start following an injury, and his team features a weak receiver core and an abysmal running game to match.

T.J. Hockenson is the only player worth even mentioning on this team. Aside from him the offense is a discombobulated mess, and the defense is paper thin with no players to be excited about.