One Last Loss for the Season: JV Football Fails to Stop the McNeil Mavericks 20-19 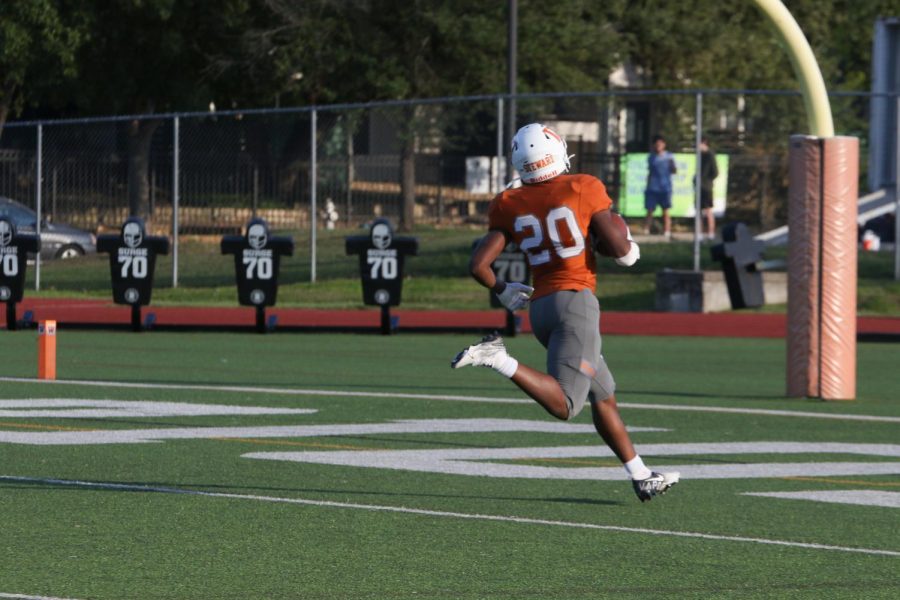 Earning a touchdown, Demani Stewart '24 runs to the endzone.

Football hasn’t been the sport for Westwood this season but that might change with the JV’s last game against McNeil. Coming off a trio of losses, many are hopeful that this game will be the breaking point. Unfortunately, it wasn’t the Warriors day as they fell to the Mavericks, 20-19.

The Warriors started with a kickoff by Christian Orta ’23, starting defense against the Mavericks. They were unable to gain any ground due to the Warriors’ strong defense, leading to a turnover. Building strength, the Warriors pushed up the field, close to the end zone as the first quarter ticked away. They were just five yards away when a false start by the Mavericks delayed them but the time was already up by then, summing up the start of the game.

The second quarter started strong for the Warriors as they kept their starting position inches from the endzone. Barely a few seconds in, Demani Stewart ‘24 caught the first touchdown of the game, securing the Warriors’ lead in the first half. The Mavericks tried to regain yardage but they barely made it anywhere as Trevor McNair ‘23 caught an unbelievable fumble, putting the Warriors back on offense. They weren’t  able to get another touchdown before the ball was turned back over to the Mavericks, who soon after scored their first touchdown.

The second quarter continued with the Warriors and Mavericks in a deadlock, any attempt to push through the Mavericks was unsuccessful as they swarmed the offensive line. It wasn’t until Stewart broke through the mob that he found a straight shot to the endzone, putting another six points up on the board. Unfortunately for the Warriors, the kick is blocked by the Mavericks’ defense. The first half ends with another Maverick touchdown and defense struggling up the field but not in time.

The second half started with the Mavericks leading 14-13, a tight game between the two teams. The Warriors had to fight up the field against the Mavericks’ ruthless defense, not buckling under the pressure though as they slowly gained yardage. It took a couple fakes and stagnant downs but Stewart once again was able to push through the defense straight into the end zone. Another unsuccessful kick and Warriors are leading into the fourth quarter with 19-14.

The Warriors were in an uneasy position moving into the fourth quarter as Mavericks started on offense, pushing up the field efficiently but not well enough to leave the Warriors with much time on the clock. The Mavericks scored another touchdown but with an unsuccessful kick, leaving the score 20-19 with six minutes left and the Warriors on offense. They continued to push up the field but time wasn’t on their side as the game finished with 20-19 in the Mavericks favor.

“The loss was heartbreaking,” Stewart said. “If we made that kick, we would’ve won but regardless it was a good game. Hopefully next season the team can come together and get some wins for Westwood.”