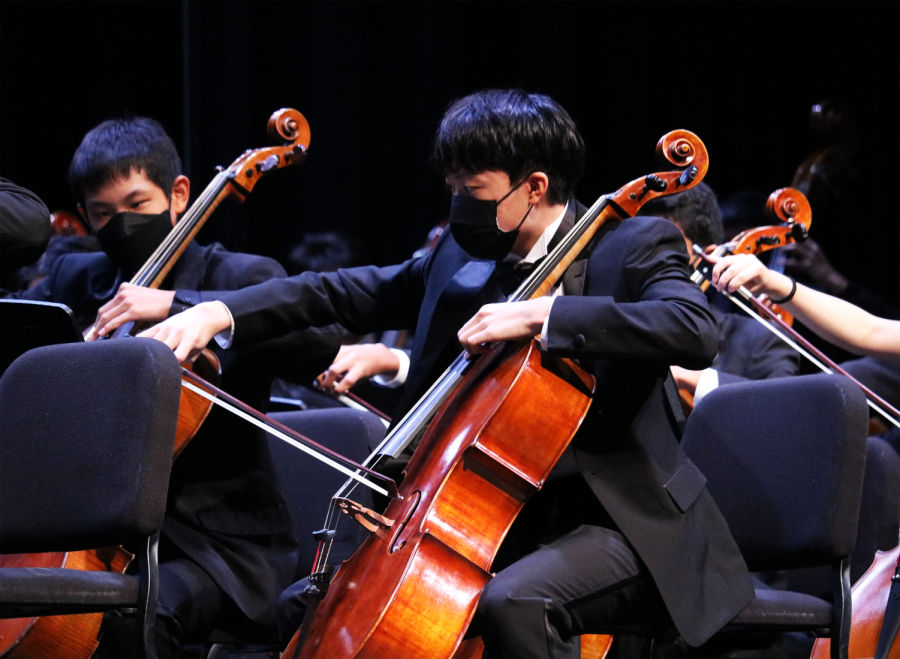 Playing in thumb position, Noah Kim '23 extends his bow to project sound outwards. The cellos and low strings were prominently featured in 'Romeo and Juliet,' with a descending theme across the concert hall that moved the story along.

High school musicians from schools across North and East Austin were alike in an anticipatory grace, sitting poised as they diligently revised difficult excerpts from their selections just minutes before performance. Reassuringly chatting amongst themselves, many students, alongside a stand partner with whom they’d likely play with again under familiar tutelage, were among the 66 Westwood students who earned a spot in the Texas Music Educators Association (TMEA) Region 26 Orchestra. The polished culmination of months of practice, illuminated by the sheer caliber of preparation, was celebrated at the students’ concert on Saturday, Nov. 20 at the RRISD Performing Arts Center (PAC).

Under the direction of Dr. Elizabeth Chappell, Assistant Professor of String Music Education at the University of North Texas, the Region 26 String Orchestra took the stage first with Shaker Dance from the Fourth Movement of Symphony for Strings No. 2 by Jeffery Bishop. Lively, percussive col legno was a sparkling prologue to an exuberant plethora of picturesque scenes.

“During rehearsal, we not only solidified our rhythm and tempo, but also worked on the musicality of each piece, trying to convey a certain tone. The orchestra worked on the small details and phrasing that truly conveyed the music at its best,” cellist Eera Gour-Gupta ‘25 said.

Transitioning into the serenely intricate Doretta’s Dream from the Opera “La Rondine” by Giacomo Puccini and arranged by Ian Edlund, a yearning reminiscence transmitted throughout the ensemble was best captured in the mournful plucks of the harp, delicately divulging the complex intensity of longing and melancholy through polished harmonization.

“The harp part for Doretta’s Dream wasn’t awfully hard, and it’s really thanks to the chords that make the piece unique. I had to really practice for finger memory on sections that had large arpeggios or making sure I played the right chords,” harpist Faith Chan ‘23 said.

Concluding their program with Allegro con Brio, the first movement of Symphony No. 8 by Antonín Dvořák and arranged by Robert McCashin, the String Orchestra’s closing piece was marked by a somber, yearning chorale in the low strings. A violin solo played by concertmaster Hannah Lee ‘24 emulated the flute part composed for the original symphony, voicing the brightness of a bird’s call, a joyfully melodic interjection reverberating across the stage in a rich balance of bright tonal color, amplifying themes of the euphoric beauty of nature and life.

“My first high school region experience [was] quite eventful, in a good way,” violinist Marlene Luo ‘25 said. “We worked really hard under the guidance of Dr. Chappell, running through the pieces and adding musical details to perfect them as much as possible for the concert. Preparing the pieces was a delightful experience, and we were able to improve our musicality and cooperation skills along the way.”

Led by Mr. Farkhad Khudyev, Music Director of the University of Texas Symphony Orchestra, the Region 26 Symphony Orchestra closed out the rest of the evening with Tchaikovsky’s Romeo and Juliet Fantasy Overture. Exhilarating in its expanse of motifs that clashed, converged, and evolved in an organic unity, Shakespeare’s classic work began with the clarinets and bassoons, whose chords formed a dark, foreboding atmosphere to reveal the perceptive Friar Laurence, the trusted advisor of Romeo. The story of the star-crossed lovers is introduced by the lower strings, beginning in the cellos, who illustrate a romance marred by hostility.

“Our maestro did a spectacular job in maintaining [the] balance of throwing us into the deep end while taking things one step at a time,” cellist Akhil Gharpurey ‘23 said. “That way, we were able to prepare splendidly in a really cramped schedule. It was also easy to apply everything for the performance because of this, as everything our maestro taught us stuck, all the way until the concert.”

A stark juxtaposition from the earlier slow passages, the thorny Allegro Giusto formed the conflict between the Capulets and Montagues in a call and response sequence, where the families heckled each other in mounting ferocity. The violins, who phrased dialogue in a hurried, frantic precision, were met with the winds, answering in a wave of ascending anger. With tension subtly heightening by each half-step interval, audience members could almost materialize the sword fight erupting, the musicians’ artistic nuance skillfully transpiring the tumult unraveling in the streets of Verona.

“[Romeo and Juliet] was not the same level of piece as our school orchestra pieces,” violinist Joanne Pahng ‘23 said. “It was hard to get things together in only three days of rehearsals. Even though we were all tired, it was fun to see our friends, make new friends from other schools, and hear everything put together as an orchestra. I’m always glad because I know that I’ve grown, as it’s not about the results, but the process of getting there.”

The couple’s first meeting is a moment of blissful suspension, softening the brooding darkness of their fate. At the pinnacle of thematic development, the melody soars in a lush fervor, heard across the entire orchestra to encapsulate the emotional clarity of wistful lyrical lines, a spirited delivery enlivened through musical storytelling and cross-section leadership.

“Over the course of the weekend, we progressed a lot in terms of expressing the story behind the music by using phrasing and dynamics,” violinist Riya Patil ‘24 said. “Our conductor kept bringing in stories to help us imagine how to express different emotions from the music, such as thunderstorms or a lion’s roar for the fighter parts of Romeo and Juliet. We got better at matching the playing style of other sections, and especially knowing when to drop down a bit and let a different section have the spotlight.”

As the piece progressed to express the feigned sentimentality of destiny, the line between love and violence blurred, sharing the stage when the titular characters’ theme was reprised for the last time, in a minor key. Met with triumphant standing ovations in a full audience, the students’ hard work was embellished by a radiant applause.

“It was definitely one of the hardest pieces that I’ve ever played with an orchestra, so the music was actually quite challenging for me. However, I really enjoyed the music and playing [in a] full orchestra was also an amazing experience,” violinist Brooke Xu ‘24 said.

In tandem with the entire music department, the Westwood Symphony Orchestra and Chorus will perform Beethoven’s Choral Fantasy in a ‘Masterworks Concert’ on Thursday, Dec. 2, from 7:30-8:30 p.m. at the RRISD PAC.