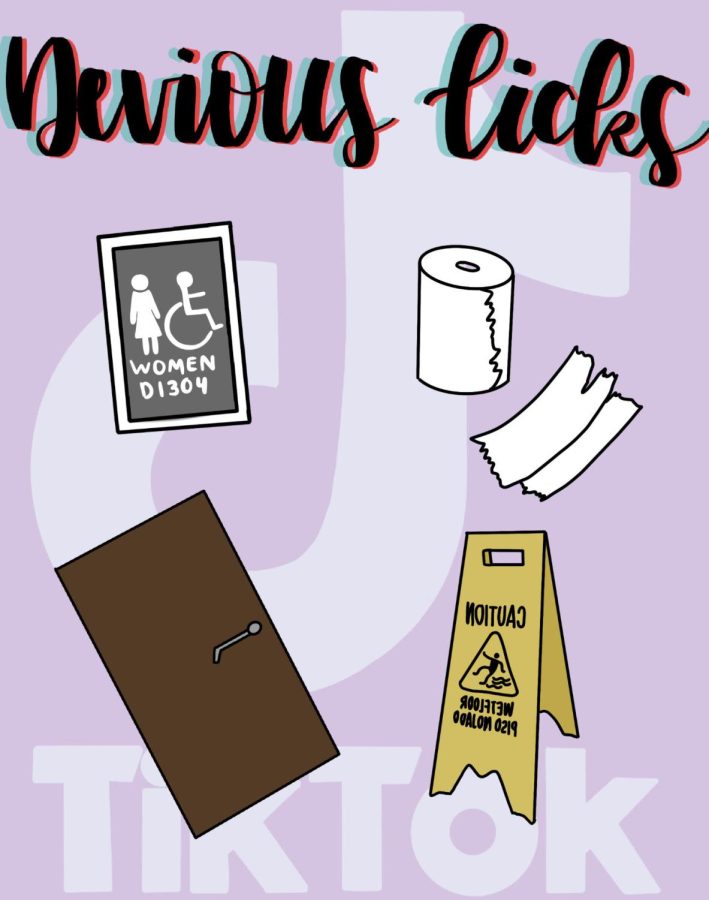 The popular TikTok trend, coined "Devious Lick," encourages students to steal, vandalize, and destroy school property. While the challenge has been an obstacle in many other schools, the viral trend is not as much of a problem at Westwood.

The beginning of the school year has brought a lot of changes with students and staff returning to in-person classes, and Tiktok has had a major impact on this transition, especially in terms of student behavior. A recent TikTok challenge encouraged students to vandalize and steal from the schools they attend. A participant takes the stolen item home to show off what they call their “Devious Lick”, and then proceeds to post the incriminating evidence on TikTok. Trending videos of this challenge have gained millions of likes and views; popularity seems to be the main motivator for students’ commitment.

“It’s dumb that someone obscuring property is getting fame for doing something so harmful and still getting popular just because they are hurting others,” Avery Pooler ‘25 said.

Included in some of the Devious Lick videos are authority figures going on the intercom, asking students not to vandalize their schools. The speakers included a good deal of emotion in their speech, mentioning how disrespectful and upsetting these actions are. At Westwood, Principal Dr. Mario Acosta himself appeared on the intercom to discuss the issue with the student body, announcing similar points and mentioning that we should respect our janitors and not partake in the trend.

“It’s not hard to respect [janitors] at all, they’re humans. I don’t understand why people are pestering them so much, they already don’t get paid enough, but they still deal with it. There’s nothing they can do,” Sophia Bednarz ‘24 said.

While Dr. Acosta condemned our student involvement in the Devious Lick challenge, Westwood is considerably less affected compared to other schools. On other campuses, expensive items such as school telephones, fire exit signs, and microscopes have been stolen.

“What have they taken? Actually very little. We were very fortunate that not too many things got destroyed, [only] a couple of things, which is normal. They broke a paper towel dispenser,  knobs [on] two doors, soap dispensers, and they stole a few of our wet signs. But other than that it was pretty mild compared to other schools. Nothing major,”  Head Custodian Eddy Moreno said.

Trends with dangerous or legal consequences aren’t a new occurrence. Challenges like putting a corn cob on a power drill, walking on unstable pillars of milk crates, and the infamous tide pod challenge have encouraged hazardous behavior in the past.

“Students have always been known to steal stuff and it’s like a teenager stereotype, but [I think] students will be more aware now of how trends affect us. I don’t think it’s going to change, because it’s a new generation, [and] every generation is going to have its quirks,” Giana Valdovinos ‘23 said.