Varsity Football Closes Out Season with 35-28 Lose Against McNeil 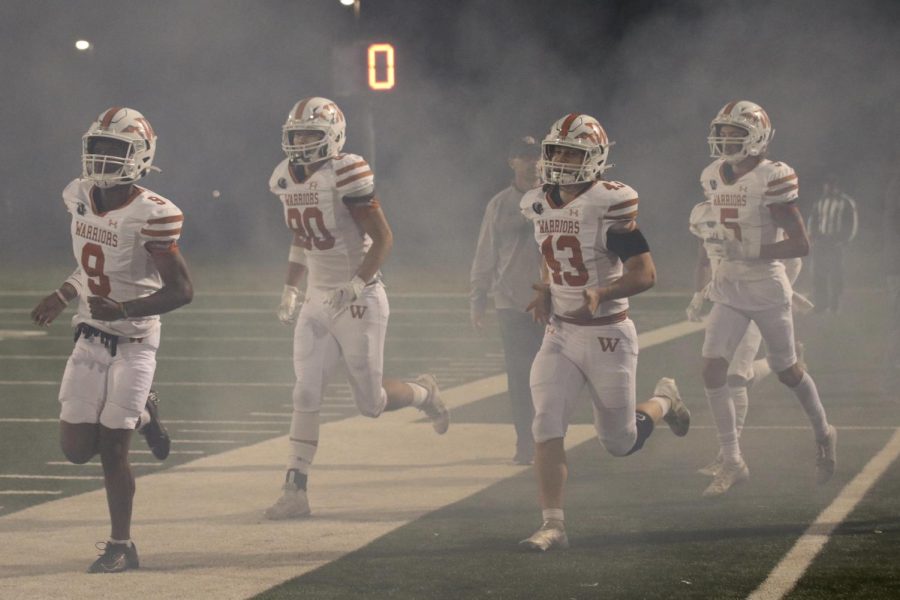 Following a disappointing loss to the Cedar Ridge Raiders, the Warriors fell to the McNeil Mavericks in the final game of the 2021 season, 35-28. The Warriors fought hard during the game, with four touchdowns in the first half and strong defense throughout the game in the face of numerous penalties, keeping the crowd’s energy high in the last game of many Warriors’ high school careers, despite the resulting loss.

McNeil opened the game, receiving the first play at the 30 yard line with a first down for the Mavericks. The Mavericks then scored a touchdown with the first possession within three minutes, pushing them into the lead. Coming off of McNeil’s kickoff, the Warriors brought the ball to the 40 yard line. Wide receiver Grant Jaeger ‘23 caught the ball at the 15 yard line, setting the Warriors up for a touchdown by Darion Barnes ‘22. A few minutes later at second and goal,  the Mavericks were able to score another touchdown after previously having a penalty on an attempted touchdown two yards to the goal. Zach Pryor ‘22 received McNeil’s kickoff, almost resulting in a fumble, but recovered it and passed the ball to Barnes, who was stopped by the Mavericks’ defense. After Barnes ran the ball for ten yards and was stopped at the thirty one yard line, Jaeger fought for the Mavericks’ ball, Barnes executed a run on Westwood’s first down on McNeil’s 30 yard line. After a fourth down conversion, the Warriors were able to score a touchdown with a pass to Jaiden Webber ‘22 with eight seconds left in the quarter.

“[The game] went pretty good, but I think we could have done a lot better with our possession, which weren’t as great as they were in the first half,” Jaeger said. “[Next season] I want to improve on getting the team together and making sure they show up every day, watch film every day, and just work hard. I think [this season] went pretty well, just not the way we wanted it to go.”

The Warriors kept pace with McNeil in the second quarter, with them holding the Mavericks on the fourth down, and Barnes running the ball to a 54 yard touchdown, putting the Warriors ahead 21-14. A few minutes later, following the Mavericks’ third touchdown from the seven yard line, the Warriors also scored a third touchdown, resulting in the Westwood Quarterbacks’ being three and three for touchdowns. Succeeding another McNeil touchdown, Lane Wood ‘24 almost scored another touchdown for the Warriors closing the first half of the game, but didn’t catch the ball. With 34 seconds left in the quarter, Westwood held McNeil after the Warriors quarterback was sacked and they didn’t score. The Warriors closed the first half with less monochromatic plays, managing to gain ground despite the back and forth nature of the game.

“I feel like [this last season] went pretty good. I’ve definitely had an improvement from last year, and off season I really worked hard for this year. This game went really good, I feel like we all played our hearts out, and we just didn’t come out with the win, but we all played our hearts out, and that’s what matters,” Barnes said. “I just want to shout out all my teammates for playing hard, I love you all for always being there for me.”

Neither the Warriors nor the Mavericks were able to score points in the third quarter. Following an incomplete pass to Jaeger in the Warriors fourth down, Westwood called a timeout to prevent a delay game penalty. After the Mavericks were faced with a pass interference call, the Warriors were in possession of the ball, with Barnes gaining four yards to the 14 yard line, causing a change in momentum after Westwood threw an interception to the Mavericks, forcing a fumble that Westwood recovered. The fourth quarter of game saw a change in momentum for McNeil, as the Warriors failed to recover ground from the Mavericks’ plays, who converted their fourth down into a touchdown at two yards, putting the Mavericks ahead at the final score of 35-28. The Warriors appeared to make a comeback with minutes left on the clock, but incomplete passes resulted in futile attempts to move the ball down the field, and a long pass by Westwood that was thought to be caught was ruled incomplete, cementing the Warriors’ loss.

“Each day you look for improvement, not only in athletics but also in academics and in your personal life, and each day [next season] we will strive to be the best that we can be,” Head Football Coach Anthony Wood said.

The Warriors wrap up their season with a 1-9 record and head into the offseason.