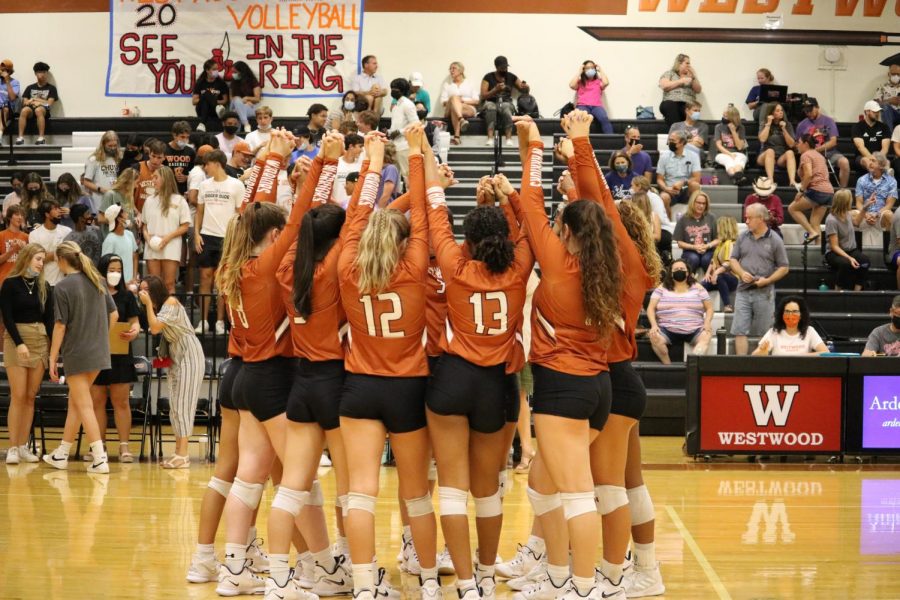 Minutes before the game, the girls huddle up enthusiastically. Hands interlocked, our athletes showed the crowd unbreakable team spirit.

On Nov. 2, the Lady Warriors traveled to Austin High School to battle against the Austin High Maroons for the first round of playoffs. Coming in as the underdogs, the team endured throughout the five sets, keeping their heads high and energy loud. Backing up the Lady Warriors, The Tribe showed up wearing all black, fitting the ‘Black Out’ theme of the game. Austin High were determined to continue the fight and they fought against the Lady Warriors, 25-19, 25-21, 21-25, and 20-25. With the final set in play, both teams battled furiously, knowing that their season ends tonight. Not looking back, the Lady Warriors dominated the Maroons in the fifth set 15-8, claiming the title of Bi-District Champions and pushing to the next round.

“If I think about [that being my last game] then it’s just going to lead me to more errors. It isn’t fair to my teammates if I’m just focusing on myself. During those moments I was focused on winning the game and moving onto the next round,” Peyton Ferree ‘22 said. “I wasn’t thinking that if I do win it would be my last game, I was thinking about winning this game and moving onto the next round.”

Alex Kriz ‘23 led the night with 22 kills, an inch away from breaking the school record for kills in a match. Backing Kriz up on defense, Lola Fernandez ‘23 picked up 26 digs and Trinity Woods ‘23 stuffed Austin five times with blocks. Captain Erin Fagan ‘22 also had a solid all-around effort with 23 digs and 11 kills.

“I thought we had really good team chemistry. Going into the game as the underdogs really fired us up and gave us energy. Our scrapy defense put us up a level, ” Fernandez said

The Lady Warriors will play against Madison High School at Dripping Springs High School on Nov. 5 for the second round of playoffs.