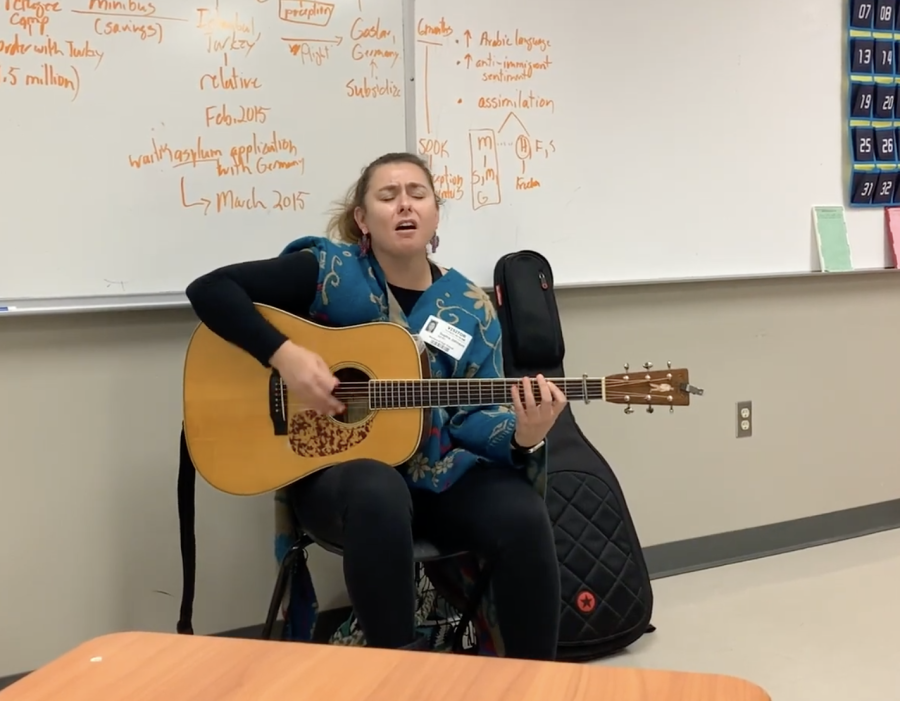 “It was all very interesting. I really thought that everything tied together to show what a person came from and [their] perseverance. [That] kind of [upbringing] in England, and [the way] [Johnson] introduced that into her music,” William Hicks ‘24 said.

Johnson started playing bluegrass music in her hometown of Birmingham, England, with her sister and father in their family band, The Toy Hearts. She started writing her own music around the age of thirteen.

“You have to give yourself permission to write some bad songs. Nobody writes their best song as the first song that they write,” Johnson said. “I wrote lots of songs and now some of them are recorded and I go back and I’m like, ‘oh my god, that is just horrendously embarrassing.’”

Growing up around musicians, Johnson was exposed to bluegrass and western swing at a young age, their influences impacting her style of music.

“My dad played such a range of all American roots music at home and I didn’t see [bluegrass and western swing] as being these really separate things, but kind of, they are. I love that [western swing] style of guitar playing and I’ve always loved country music and I love jazz,” Johnson said.

Eventually straying from the bluegrass music that started her career, Johnson began to develop her own style of music.

“It seems like [Johnson’s band] established an identity that the bluegrass purists wanted to hold [her] to, that there was this sound and an arrangement, and that straying from that wasn’t there,” Mr. Bray said. “It seems like at that time, [they were] evolving, [they were] being unique, [they had] a clear identity, and there [was] a lack of, maybe, acceptance.”

Johnson was eventually drawn to Austin by its uniquely chaotic environment and her love of western swing music. Texas is the fountainhead of the distinctive style, and Johnson was eager to return to its roots.

“Austin [is] such a liberal hub of hippies and weirdos, or at least that’s the historical thing, and we just loved Austin so much. When I came here and I’d see bigger bands playing swing music, it seemed to be [what] I really liked, and Austin, with its kind of much more free attitude about everything, just appealed to me so much,” Johnson said.

After having been a part of multiple projects, including her album Whiskey with The Toy Hearts, and performing with many artists on a local stage, Johnson now averages around 35 gigs a month, a stark contrast to the start of her musical career.

“[The Toy Hearts] really weren’t very good at all when we started performing, but we decided to just keep doing it and we got better quickly,” Johnson said. “If you throw yourself out there and have to perform in front of people, you learn really, really quick because it’s humiliating when you get it wrong.”

Johnson wasn’t initially the lead singer in her band, giving the reins to her sister, but now has broken the barrier to come to the forefront as the star vocalist. Johnson reflected on the nerves she has had to overcome as a musician to step up into the position.

“My sister had been singing, but as soon as I moved here, it [was] like, ‘Okay, I’ve got to step up,’ and my singing got so much better and now I’m confident enough to be the lead vocalist,” Johnson said. “I’ve just applied the same thing I did in England, sort of a baptism of fire and hope for the best, and it’s kind of worked out okay so far.”

Johnson is now an accomplished vocalist, guitar teacher, songwriter, and instrumentalist, and has become ingrained in Austin’s country music scene, known specifically for the majority of her western swing music.

“When I came here, people immediately were saying, ‘you should move here, I could get you gigs,’” Johnson said. “I now teach guitar and I play gigs and at the moment, so some days I play two or three gigs. Austin [has] been good to me.”

After discussing her musical career with students, Johnson played a couple of songs, showcasing the differences between the different styles she explores. She began with a bluegrass song, highlighting its rolling guitar plucks and gentle rhythm, then played a swing song about her hometown of Birmingham, crooning the words like a ballad, and finished off with a rock-and-roll track from her album “One Year” titled “Don’t Call.”

“I love live music in general so it was a treat,” Hicks said. “I don’t play an instrument, but it was very interesting learning about [her style of] music. It was crazy [to hear her perform]. Incredible.”

Johnson explained the differences between bluegrass and western swing, exemplified in the songs she played. With her use of swing, Johnson brought out her longing for the place where she grew up.

“The second [song] is much more jazz [and] swingy and all the chords that I play in that are kind of in the style [of] Bob Wills, Texas swing. I wrote [it] about my hometown, Birmingham, [which] is a real industrial city. [It] was rebuilt in the 60s after the war [so it’s] kind of an ugly city,” Johnson said. “The first one was more in the old country, bluegrass kind of feel.”

Johnson left an impact on students with some words of advice for any aspiring musicians, specifically about the skill of performing.

To learn more about Johnson and her music, you can visit her website.