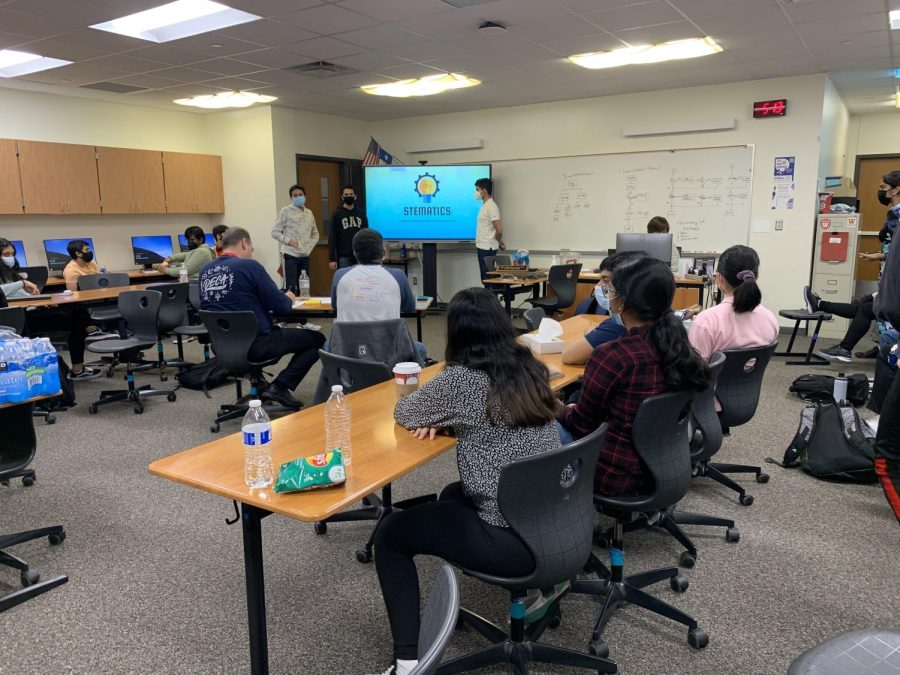 Presenting animatedly, a group of students pitch their idea "Stematics" to the judges of the semester showcase. The Westwood Tech Starters Club held this showcase as a halfway point for the members of their club to get feedback and improve their product ideas.

The presentations were seven minutes each, with a three-minute judging period afterward where all three judges gave the groups advice on how to improve both their pitches and their products to be more accessible to the public.

“One thing that is really important within computer science is [that] you can be the most brilliant programmer in the world, but in the end, if you don’t know how to sell your idea to other people, that makes all the difference,” President Rakshinee Sreekanth ‘22 said. “It can be so hard to know where to start [with] programming, [so] this club is there as a starting point for high schoolers to know what it’s like making products work.”

The first group, with a product named Stembots, focused on the idea of fostering stem education in elementary schools. The team aims to build a robotics kit that is convenient and easy to use, progressing in difficulty as familiarity increases. The second group pitched a website planner application named Checkpoint, attempting to accommodate the needs of neurodiverse individuals into their service. Stematics, the next business proposal, is directed toward producing a platform where children can learn coding in a game setting. Their goal is to implement a coding base in all school-age children as the Science, Technology, Engineering, and Mathematics (STEM) job market continues to expand. The last group concentrated on building a website named Ricetta, which would specifically allow people to share recipes and cooking styles over the internet through one platform.

All of the groups will be presenting their finished products at the end of the school year to Mr. Husley, Mr. Siler, and Mr. Andrade again on Demo Day. For more information about the Westwood Tech Starters Club, visit their website.