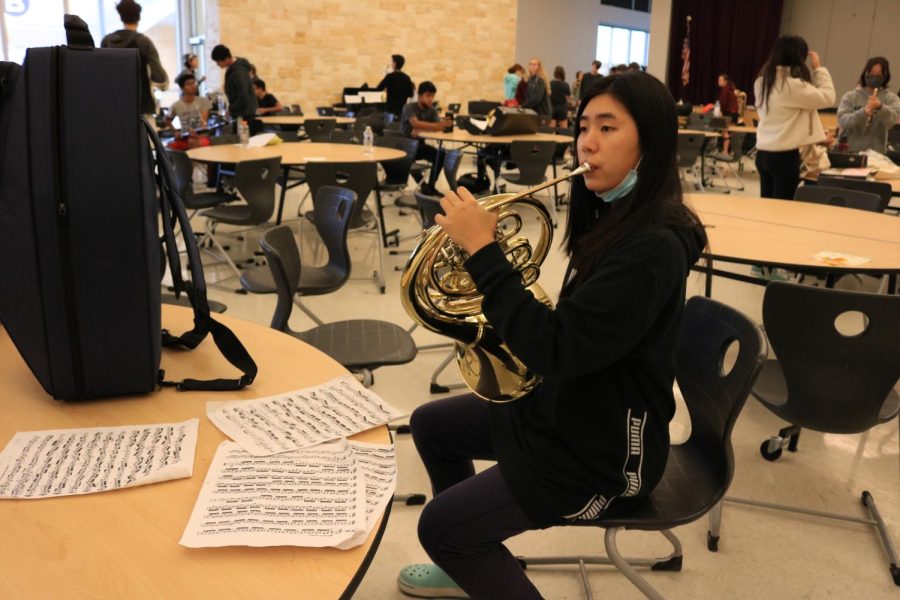 To foster musical growth across the state, Texas Music Educators Association (TMEA) Region 26 members anonymously auditioned for 6A Region Band at Cedar Ridge High School from Dec. 10 to 11. 82 students total placed, and 30 advanced to Area auditions to be held on Jan. 8.

“I’m very happy with the results,” private lesson teacher Mr. Sean Dacy said. “With the pandemic and not doing an in-person audition in so long, just completing the process is a win.”

Participants began the process in July, when they received three etudes, or musical technique studies, from TMEA-selected audition books. They were allotted six months of preparation before the audition.

“It’s a good amount of time commitment to try to perfect three pieces of music at the highest level,” Director of Bands Mr. Thomas Turpin said.

Because the Region process relies on independent practice, lesson teachers like Mr. Dacy emphasized a safe learning environment in their weekly private instruction.

“This year, the best motivation was positivity and getting confidence in the individual player,” Mr. Dacy said. “With it being so long since auditioning and with the pandemic, I felt that was the best approach.”

Some band members also felt empowered to improve on their own, including French horn player Rira Suh ‘23.

“The whole motivation for practicing this year, more than I have ever done, was because I was not able to play a lot last year, being in South Korea in an apartment,” Suh said. “My playing assignments were bad, so I wanted to do good this year to make up for it.”

To Suh’s luck, Mr. Dacy noted that this year’s music “especially” developed technical skills due to its complexity and also helped students familiarize themselves with their instrument.

“Learning [etudes] gives an understanding of the important horn players in our history and also teaches some techniques and styles that were often used in the 19th century, but have since died out,” Mr. Dacy said.

The valuable benefits TMEA’s Region etudes supply are why staff encouraged all students to learn the music, regardless of whether they auditioned for Region or not.

“Learning the etudes this year but not competing prepared me for next year because I understand that in order to be ready, I need to practice as soon as they come out,” French horn player Annalise Breyer ‘25 said.

In support of those with performance anxiety, directors encouraged students to play excerpts in front of their peers to simulate the audition. This prepared a selected group of players for Region Orchestra auditions on Saturday, Nov. 13 at Pflugerville High School, where they auditioned in person for the first time since 2019.

“I thought the Region Orchestra experience was really helpful because I got to get my first audition nerves out, and I felt like I was more ready [for Region],” flutist Grace Wang ‘24 said.

Results gave auditionees an idea of their progress and how they might perform at the Region Band audition in December. Top-ranking chairs secured an Area spot to eventually audition for TMEA All-State.

Despite the nearing deadline however, the Region process remained a challenge for some; with state testing and finals week preparation in between auditions, students had to manage their free time efficiently.

“It’s very hard to find the motivation to practice when you have millions of tests to study for,” Wang said. “There’s times where you just want to relax and not do anything.”

What kept Wang and others motivated was the hopes of performing a concert with friends from other schools.

“In middle school Region, that’s where I met a lot of my fellow flutes right now, because they all went to Pearson, Canyon Vista, [or] Walsh,” Wang said. “It’s good to see them at marching competitions and now at [Region].”

After months of preparation, the instruments with the most players began Phase 1 of Region auditions on December 10. Some advanced to Phase 2 on Dec. 11, joining the smaller instrument groups who just began auditioning.

Overall, 25% more students, including Suh, advanced to the Area competition compared to the virtual audition in 2020.

“I’m really glad I made Area,” Suh said. “This means I’ll have to practice more, but I’m pumped that I can go on charter buses with my friends and stay the night at a hotel where all the fees are covered.”

The Region Band concert will be held on Saturday, Jan. 22 at Weiss High School.

“This will be my first [6A] Region concert because we didn’t have one last year, so I’m excited for what we’ll be playing,” Suh said.