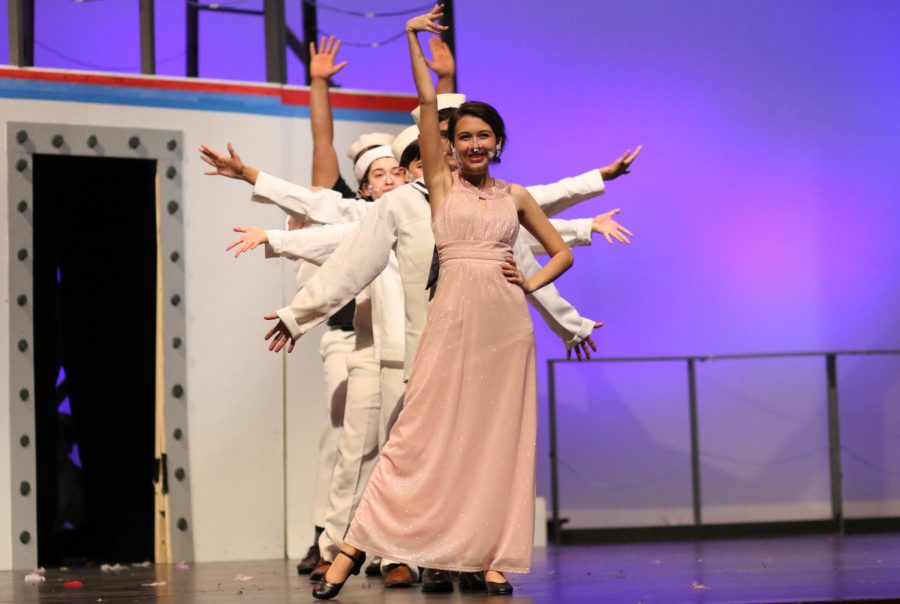 In the front of the line, Magda Riha '22 performs with the group of sailors. All throughout the musical, the sailors are crazy about her character.

The jazzy and dynamic melodies of the orchestra transported me to the deck of the S.S American while watching Westwood Theater’s Friday, Jan. 14 performance of Anything Goes. Hilarious and energetic, the De-Lovely cast of the musical charmed the audience with their characters’ eccentricities as they battled one another to win what they desired in the game of money, fame, and love. Directed by Mr. George Franco and Ms. Robin King, both the De-Lightful and the De-Lovely cast performed again on Saturday, Jan. 15, at 2 p.m. and 7 p.m, respectively.

Anything Goes follows the story of the passengers on a luxury liner sailing from New York to London in 1934, revealing some well-intentioned in their pursuits and others not. As their conflicting interests clash, there is never a dull moment aboard the ship. In the first act of the play, the audience is introduced to the musical’s protagonists, the endearing and clever stockbroker Billy Crocker, played by Diego Rodriguez ‘22 and the charismatic, confident, and even cleverer evangelist-turned-nightclub-singer Reno Sweeney, played by Cara Tome ‘22.  Both Crocker and the audience are in for a surprise as Sweeney confesses her love to Crocker in the opening song of the play, I Get a Kick Out Of You, before boarding the American. To Sweeney’s dismay, however, Crocker doesn’t return her feelings, and instead, after a series of mishaps, decides to board the ship as well (unbeknownst to Reno) with a false passport to pursue Hope Harcourt, another passenger on the ship who happens to be Billy’s first love. Played by Cameron Hewett ‘22 and Kaya Contello ‘24, Hope is unfortunately engaged to the quirky British aristocrat Lord Evelyn Oakleigh, played by Oliver Barnfield ‘23 and Brady Richards ‘23.

“Anything Goes is by far my favorite show I’ve been in,” Hewett said. “It’s a comedy. The songs are great [and] there’s lots of fun dances. Overall, I just loved being part of a show with my best friends.”

The rest of the first act unfolds at a quick pace, as Billy is eventually found by Reno, who instead of berating him, reassures Billy of his ability to win Hope over in the endearing duet You’re the Top. Billy then quickly discovers the two passengers that gave him his passport aren’t who they claim to be, and he has been inadvertently posing as Public Enemy #1, Snake-Eyes Johnson, his entire time aboard the ship. Moonface Martin, also known as Public Enemy #13, (played by Evan Martinez ‘22 and Emma Portnoy ‘23) and Erma (played by Madga Riha ‘22 and Eva De Guelle ‘22), Moonface’s accomplice, are both crafty yet impulsively idiotic, and hysterical to watch onstage. By the end of the first act, Martin and Reno decide to team up to sabotage Hope and Evelyn’s engagement in the energetic Friendship. Act one ends with the explosive and dynamic tap number Anything Goes, as the ship’s passengers and crew join together on deck to celebrate how it appears that on the S.S. American, just about any outlandish mishap could occur now.

“[Anything Goes] was such a labor of love,” Rodriguez said. “It’s been so many hours trying to perfect it, and it was really frustrating sometimes, because some of those moves were extremely hard, but when we finally got it all cohesively together it was the best number, dancing-wise. Singing-wise my favorite number was There Will Always Be a Lady Fair. Even though I’m not in that number, it’s still my favorite.”

The comedy builds on itself in act two, as Billy’s drunk boss, Eli Whitney, played by Jackson Lind ‘22, who is also on the ship, disastrously tries to pursue Hope’s mother, Evangeline Harcourt (played by Cait Lackowski ‘22 and Suzannah Wells ‘23), who remains committed that Hope should marry Evelyn, despite Billy’s best attempts to break up the engagement. The ensemble puts on a truly spectacular performance in the opening numbers of the act, including Public Enemy Number One and Blow, Gabriel, Blow. Meanwhile, Billy, who has been “outed” as being Snake-Eyes Johnson, is first celebrated by the crew and everyone else on the American who crave a famous passenger on the ship.

“What I loved most about Anything Goes was the people,” Tome said. “There’s something to be said about a cast that can pull off something this difficult and still have fun. The chemistry we all have together on and off stage is killer, and it made the show truly enjoyable.”

Later, he is imprisoned along with Moonface after Billy reveals the ruse in a last-ditch attempt to win Hope over. Just when all hope, both literal and figurative, seems lost, Reno reveals to Billy that in the midst of the chaos on the ship, she and Evelyn have fallen in love after he confesses to her in the effusive solo The Gypsy In Me. This new information provides an opportunity for Billy and Moonface to pull-off a jailbreak and put a stop to Hope and Evelyn’s wedding. In the fantastical finale of the musical, the characters reunite against all odds, in love and riches as the S.S. American sails to shore.

“I really enjoyed learning more about singing and dancing which was not something I had thought much of before,” Barnfield said. “Most of all, I loved being in a cast with so many really talented people who I became friends with. Everyone was so nice, funny, and supportive. My favorite number to perform was The Gypsy In Me because it was my solo and I had never gotten to perform a solo song before. It was the largest role I’d ever had, and it really meant a lot to be a lead actor among so many talented people.”

Buoyed by the amazing crew work, set design, and intricate costuming, the Westwood Theatre Department’s production of Anything Goes is a celebration of life’s most extravagant delights and mistakes.

“I said this in our senior circle before our closing night, and I’m just so excited for all the underclassmen, [and] where [the Westwood Musical Program] is going to go,” Rodriguez said. “I’m so excited to see where [Mr. Franco] takes the program because it seems like he has a lot of ambition and I just want to come back next year and see them perform again.”