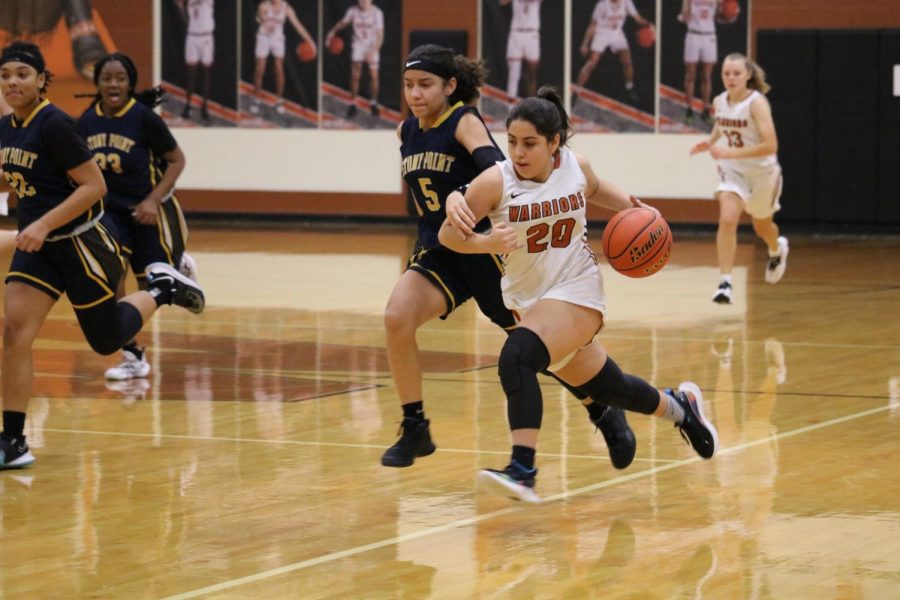 Speeding past her opponent, Bailee Dainton '25 holds the ball in her palm ready dribble her way towards making a basket.

Friday night, Jan. 7, the junior varsity girls basketball team and the Stony Point Tigers met on the court for their first game of the year. Putting up a smooth fight, the Warriors left proud with a score of 60-24. This made up for their last game against Round Rock, and put off a great start to the new year.

“We had a better time passing the ball around and looking for open spots,” Ava Sarter ‘25 said. “Last game was pretty messy but this game we cleaned it up quite a bit.”

Not long after the second quarter, The Tigers shot two baskets, adding four points to the scoreboard. Stony Point struggled to keep the ball in their possession, and the Warriors managed to score two free throws and five baskets, collecting 12 points. This left the first half of the game with the scores 29-7, with the Lady Warriors in the lead.

“I think we played as a team,” Emily Graham ‘25 said. “We played together really well. We were supporting each other and I think that helped us a bit.”

Jumping back into the second half, the Tigers took possession of the ball. The Warriors then stole the ball and increased the gap more. The Tigers attempted to make a comeback with five baskets and four free throws, but the Warriors weren’t phased as they continued to score multiple points. . By the end of the third quarter the Lady Warriors were pushing ahead 45-21.

“I think the energy was great today. We were really hyped up and we had a good game,” Ava Hall ‘25 said. “We obviously need to work on rebounds more. That’s what we’ve been struggling with lately.”

In the last quarter, the Warriors shot seven baskets and one free throw. Determined to keep the big gap, the Lady Warriors showed strong defense and kept the Tigers to only one basket and a free throw. This left the scoreboard at 60-24 by the end of the game.