What LEGO Theme are You? 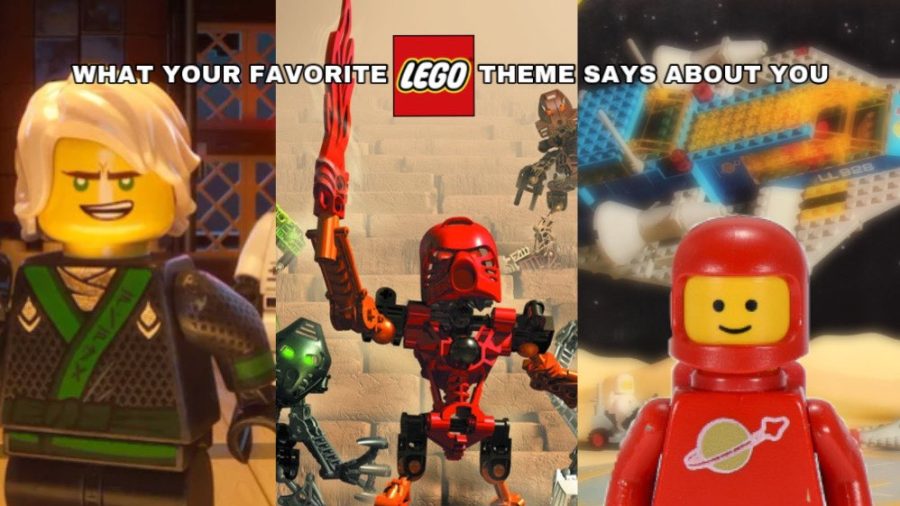 With it's 90 year run, it's only inevitable that LEGO has assumed several different aesthetics and identities, each of which have been celebrated by their own collective fanbases.

Happy 90th, LEGO. The LEGO company has been around for nearly 90 years at this point, and it shows. With it’s slew of original and licensed themes building up much like the bricks the system is based on, everyone has a toy for everything. There’s themes about knights, ninjas, pirates, space, Star Wars, Super Mario, Marvel & DC, and even… cyborgs with human insides? It’s a lot to unfold. Regardless of that, I bet you one of those themes is someone’s favorite. But you see, everyone’s taste in LEGO themes probably says something about who they are, and I’ve made a list that perfectly describes who you are based on your favorite LEGO theme.

LEGO City
Hey! If LEGO City is your favorite theme, you have probably dedicated a substantial amount of time to collecting and building up a MOC city for your LEGO citizens. LEGO City is an iconic theme no doubt, but it’s very generic in nature. Not to worry, however, it’s that genericness that makes it appealing. Based on it’s older counterpart, LEGO Town, LEGO City mirrors our real world in a more optimistic and friendly way. Existing as a sort of nexus point for subthemes, themes that aren’t a completely separate line but have their own distinction, deep sea exploration, space travel, and arctic exploration and mainly focusing on firefighters, police officers, and just people going about their day, it’s hard to go wrong with LEGO City.

LEGO (Classic) Space
You’re a huge LEGO fan, and have been one all your life. Classic Space as many fans call it refers to LEGO Space subthemes from the 70s to the 90s. Many older fans remember Classic Space for subthemes such as Ice Planet 2002, Life on Mars, Blacktron, Space Police, Exploriens, Insectoids, Spyrius, M-Tron, and UFO, but it’s mostly remembered by fans, old and young, for that Space theme. The one with it’s oddly iconic sharp edges, blue, gray, and yellow color pallet, and garish cast of spacemen. Classic Space fans have been inspired by the aesthetic of these themes for years, designing plenty of MOCs since their inception nearly 50 years ago, and there’s no sign of that stopping anytime soon.

LEGO Star Wars
You’re boring. This is coming from someone who’s been a LEGO Star Wars fan for their entire life. While LEGO Star Wars manages to, at this point, capture the designs of the franchise’s most iconic characters and ships perfectly, it’s hard to call this theme “creative” as it isn’t one of LEGO’s original intellectual properties. This isn’t a flaw, however, as Star Wars is already a fairly creative series in terms of designs, and LEGO tackles said designs with immaculate shape and detail. LEGO Star Wars has monopolized any space-based settings for LEGO, sometimes to the dismay of fans of those original IPs.

LEGO NINJAGO
You’re a LEGO fan from the 2010’s. NINJAGO is a juggernaut of a LEGO theme. Spanning 10 years of consistent releases with original stories each year that all share one continuity, NINJAGO has captured the hearts of many. It is the theme for this generation of LEGO fans. Focussing on a team of six ninja, NINJAGO is a deeply malleable theme that lends itself for builds of mechs, supercars, giant motorcycles, and many more. NINJAGO is so beloved that it’s initial cancellation in 2013 was met with so much backlash, that it was brought out of retirement, and has been going strong since. Here’s to ten more years of jumping up, kicking back, whipping around, and spinning.

LEGO BIONICLE
In a time before time- you already know how this goes. If BIONICLE is your favorite theme, you have a love for long-running stories. BIONICLE, despite nearly falling short of NINJAGO in terms of runtime, may very well be LEGO’s most iconic theme. Certainly enough to come in first place in LEGO’s official fan vote. BIONICLE began in 2001, following six elemental warriors known as Toa, the theme would run continuously for nine years. What makes BIONICLE special is that it was more than a toyline. That was the bottom line, but the writers and artist refused to let the theme go to waste, and created a slew of online serials, comics, and books, all of which focussed on the ever evolving story. Many BIONICLE fans note that it is a theme they grew up with, that grew up with them, constantly maturing, introducing new characters, and keeping things exciting with plot twists. BIONICLE’s ending proves to be slightly disappointing amongst fans, but the comics would continue for a few more years. BIONICLE returned for two years in 2015 and 2016, known as BIONICLE G2 to the community, but many remark that it forgot what made BIONICLE G1 special, and quickly lost its luster. You missed out on BIONICLE. Anything I said about NINJAGO applied for BIONICLE and the generation of fans that enjoyed it.

LEGO Hero Factory
Hero Factory was created as an answer to some of the built-in issues that BIONICLE presented. Hero Factory was made to be more intertwined with the bottom line of LEGO; there is no way to “build wrong,” and that anything you build is valid. While this wasn’t the case at first with the first wave of products being just as limited and customizable as the BIONICLE sets that preceded it, Hero Factory fans would eventually enjoy the luxury of the Character-Creature Building System, or CCBS. This reimagining of LEGO’s constructable action (that’s Constraction for short) allowed for builders to get creative with LEGO’s ball and cup system, and make their own characters. This would later be integrated into Hero Factory’s successor, more commonly known as BIONICLE G2 by fans.

LEGO Superheroes (Marvel & DC)
You’re a comic book fan. What else do I have to say? LEGO’s superhero-based themes began in the mid-2000s with LEGO Batman, but was resurrected under a more broad theme in 2012, now featuring sets based on Marvel’s properties. These themes are pretty lukewarm in spite of the quality of the source material. Most of the original Marvel or DC sets are usually just… some build with Marvel or DC characters plastered on it. An interesting quirk about the movie-based sets is how horribly inaccurate they are, at least in Marvel’s case. This is likely due in part to the steady stream of Marvel movies (usually two movies per year) which could interfere with the LEGO designers’ knowledge of, well, what to make sets on. Even if the builds are so-so, there is much to enjoy with the minifigure selection, which perfectly capture the look of the characters they’re based on.

LEGO Exo-Force
A bit of a deep cut. Liking this theme makes you a fan of anime and manga, I guess. This theme began in 2006, and featured a defined aesthetic based on mecha anime, even the minifigures had faces drawn in an explosive art style to really drive the theme home. This theme lives peacefully in the minds of those who experienced it, and it has a dedicated community that are still building MOCs based on it, clambering for the theme’s return. While NINJAGO may have monopolized LEGO anime mobile suits, Exo-Force is the grandaddy to that wonderful combination.

LEGO Galidor or Jack Stone
You aren’t a LEGO fan. I bid you a moment of silence, for if these were your first LEGO themes, they were likely the only ones you experienced before dismissing the entire system. These themes are seen as the biggest flops amongst LEGO fans. Coming from a time when LEGO was throwing every idea at the wall, desperate for something to stick, these themes spreaded their foul ambrosia across the entire community. Galidor featured a comically low piece count for a hilariously high price. Solving the “issue” of LEGO sets having too many pieces to lose, Galidor featured uncanny action figures that had detachable limbs. Jack Stone is more of the same. Acting as a baby’s first LEGO set, these sets were more like traditional LEGO sets, but with yet another low piece count at a high price, mostly due to the large molds that ate up a bunch of plastic, serving only as a platform to place smaller pieces on. Jack Stone even had its own slogan “can do, will do.” A phrase uttered by the titular Jack Stone’s colleagues while they sit idly by, watching him solve all the world’s problems. Can do? Will do? I’ll be the judge of that.

Whether you grew up with Classic Space, witnessed the horrors of Jack Stone, or watched BIONICLE die twice, I think we can all agree that through all of LEGO’s identity changes, it still maintains an iconography that many can get attached to. Those old bricks have demonstrated their ability to transcend multiple themes and aesthetics since their inception way back when. Here’s to 90 more years of LEGO.