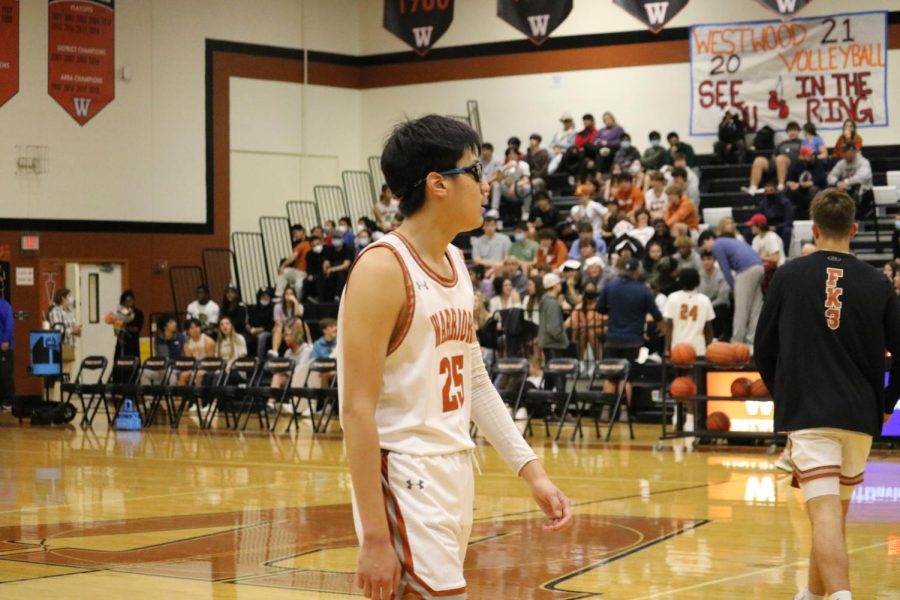 Youngchan Kang '22 participates in his first team warmup before the game starts. Kang swiftly transitioned into free-throw practice with the rest of the team.

On Tuesday, Feb. 15, the varsity boys basketball team beat McNeil 60-51. The team worked together, stronger than ever, and offered immense support to the basketball manager of three years, Youngchan Kang ‘22, in his varsity debut. The starting lineup consisted of Westwood’s stealthiest seniors. Josh Choy ‘22, shooting guard, scored 11 of last night’s points. Choy has been beside Kang since freshman year.

“I think I played pretty well, but as a team we all played great,” Choy said. “Youngchan hitting his shot at the end was definitely the most significant moment of the night. He shot nine times before then, and every single one was a nail biter. I was getting nervous he wouldn’t get to score but with five seconds left, he hit a shot and it was insane.”

Kang hasn’t played on the Westwood court since freshman year. Regardless, he has supported the Warrior basketball team as their manager for each year since then, attending every practice and cheering at every tournament in order to better support his team. Although this was his first and last game, the experience was more than impactful for him.

“Since last night was our last home game, it was very emotional for us,” Kang said. “To be honest, I did not think I was going to make that shot. During my first attempts, I did not feel confident, but I reminded myself to go out there and have fun. When I made it, I saw everyone going crazy and I was so proud. Also, for everyone there, I’m sorry for giving us eight technicals.”

The crowd definitely had a significant reaction as well. Featured on the FLXATX instagram, after Kang made his shot the crowd swarmed the court, celebrating louder than ever.

“When he finally scored, it was extremely exciting for those of us cheering for him in the bleachers,” Matt Row ‘24 said. “We rushed out of the stands and took pictures with Youngchan after the game ended.”

All in all, last night was more than memorable for Westwood Basketball. Although they lead consistently throughout every quarter, crushing the Mavericks in a swift final shot was celebratory and satisfying. Make sure to keep up with our Warriors as they take on Districts.