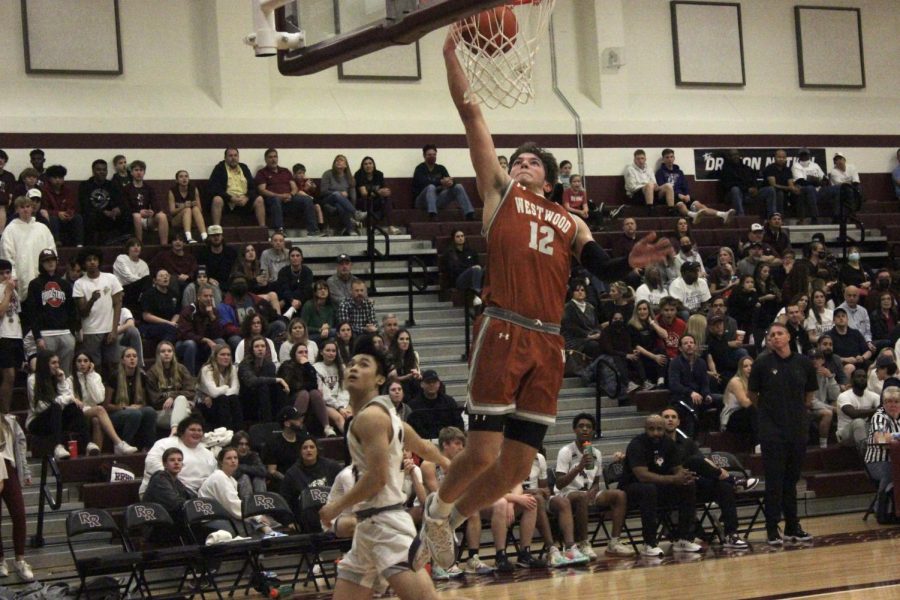 Stealing the ball Zach Engels 22’ blows past Round Rock players and dunks. This was during the second quarter when Round Rock started to close in on the Warriors lead.

Westwood varsity boys basketball (8-1) knocked off the Round Rock Dragons (7-2) at Round Rock High, on Jan. 28, 69-60. The entire game was tight, until the Warriors prevailed in the final few minutes. Gabe Parr ‘23 and Carson King ‘22 both dominated the post.

Parr had a sound game, scoring 14 points. He capped off an impressive performance with a statement dunk to ensure the victory.

“I was very happy with how I played but felt I could’ve done even more offensively,” Parr said. “The dunk at the end of the game was a perfect ending.”

The team leader, Zach Engels ‘22, led the Warriors to an important victory that could secure them a district championship. Engels has had a storied career at Westwood, and he hopes to leave on a high note.

“It’s always nice to be able to beat a team who got you earlier in the year.” Engels said, “From now on, we just have to stay focused and keep taking it one game at a time.”

The Warriors are inching closer and closer to their first district championship in 21 years. The team celebrated hard last night, after redeeming their only district loss throughout the season.

“This was a game we had circled on the calendar because we wanted to get revenge. To go into their home building and get the win is huge.” Parr said, “We’re not just done yet, we’re chasing a district championship and more.”