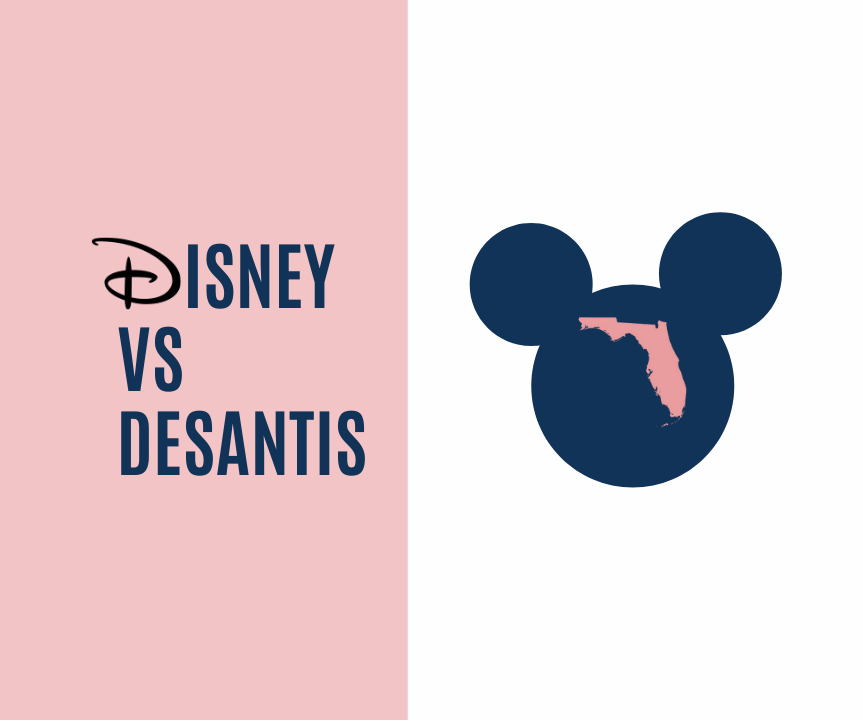 Florida Governor Ron DeSantis signed a bill that would eliminate Disney's long held special tax status in the state. This comes after the company's public opposition of the Don't Say Gay bill, which DeSantis also signed into law. Graphic by Yunoo Kim

On Friday, April 22, Florida Governor Ron DeSantis signed a bill targeting the Walt Disney Company, which would revoke benefits such as its special tax status. The biggest consequence of the bill would be the loss of the Reedy Creek Improvement District, which previously allowed Disney to control infrastructure and construction within it. Not only would this change economically impact Disney, but it also would increase the financial burden of Floridian taxpayers who live in the vicinity.

These developments followed a sequence of controversial events surrounding Florida’s recent Don’t Say Gay law, which prevents educators from discussing sexual orientation or gender identity to students up to third grade. HB 1557 was fiercely contested even before DeSantis signed it into law, as its opponents argue that it would negatively impact LGBTQA+ youth’s mental health, and could possibly lead to ostracization or bullying from peers.

The hostility toward the bill was extended toward Disney, which was heavily criticized for prior donations to Republican politicians in Florida. As a result, the corporation eventually announced that it would cease to make any political donations to any party. Furthermore, it has released statements that criticize the Don’t Say Gay law, as well as vowed to help LGBTQA+ advocates repeal the law.

“It is clear that this is not just an issue about a bill in Florida, but instead yet another challenge to basic human rights,” Disney CEO Bob Chapek said, in a statement addressed to Disney employees. “You needed me to be a stronger ally in the fight for equal rights, and I let you down. I am sorry. We need to use our influence to promote that good by telling inclusive stories, but also by standing up for the rights of all.”

Floridian Republicans, including DeSantis, expressed displeasure in response to Disney’s new stance, and explicitly declared that the new bill is retaliation against it.

“You’re a corporation based in Burbank, California, and you’re gonna marshal your economic might to attack the parents of my state,” DeSantis said, during a press conference in Hialeah Gardens, Florida. “We view that as a provocation, and we’re going to fight back against that.”

However, some have expressed skepticism in regard to the legality of the bill, as well as the legitimacy of the Florida GOP’s complaints.

“We oppose the governor taking action against a company because of their opposition to that bill,” White House Principal Deputy Press Secretary Karine Jean-Pierre said.