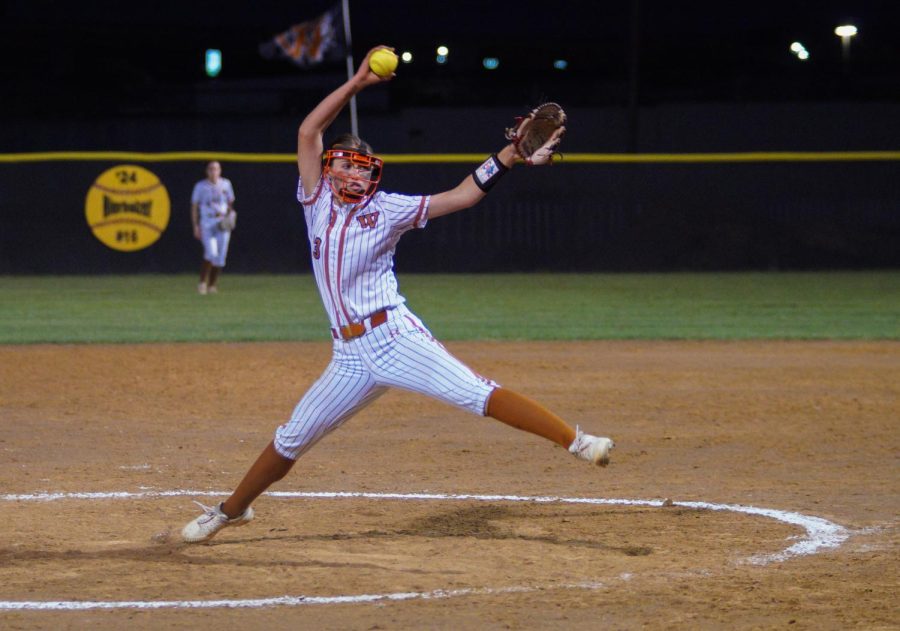 Mid-pitch, Dorothy Ziebell '24 sharply launches the ball towards the batter. With aggresive pitching the entire game, Ziebell helped the team stay ahead.

Through a misty night, the varsity softball team fought hard against the Cedar Ridge Raiders on Tuesday, April 19. It was their second game against the Raiders this season, beating them 3-2.

“I feel like we played really well in both games,” Daniella Martinez ‘23 said. “The first time it just slipped away from us and in the recent game we managed to turn it around for us.”

Beginning with the Raiders up by two, the Lady Warriors turned the game around and were able to come back in the third inning. With difficult catches by Michelle Hierholzer ‘24 and a home run by Elizabeth Joyner ‘22, the team made sure to keep the Raiders from scoring and secured the victory. Helping out the defense with aggressive pitches, Dorothy Ziebell ‘24 held the Raiders from scoring after the second inning. Advancing the team to the win, Martinez scored two RBIs.

“I focus on what will help the team in that moment and what I can do to help out the team when I step up to the plate,” Martinez said.

The Lady Warriors will play their last game of the season against the Vandegrift Vipers at the Westwood Fields on Friday, April 22.