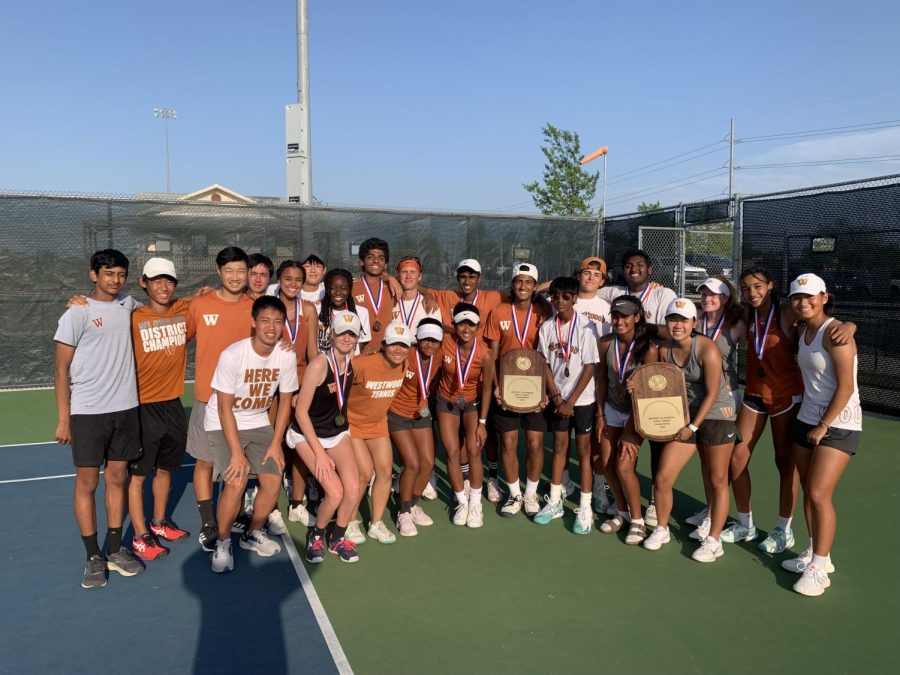 The Varsity Tennis Team placed in all five tournament events of one of the most difficult UIL districts in the state. Photo courtesy of Westwood Tennis.

Tough matchups and focused gameplay marked the two-day Varsity Tennis District Championships on Monday, April 4 and Tuesday, April 5. In this first step on the path to state, the team swept 10 awards in the tournament, with nine athletes advancing to Regionals.

“Every one of our kids made the semifinals in what is easily the toughest district in the state,” head coach Travis Dalrymple said.

“Aashish and I have known each other for years and we grew up playing with each other,” Raja said. “We used to always see each other as rivals but all it took was a couple matches together for us to realize that the chemistry has always been there. The first place win was great, [but] our goal was never district. We’re focused on the Regionals tournament in order to make [it to] state.”

In addition to the Boys’ Doubles domination, Kinaa Graham ‘23 sailed through her singles draw to win first. Mixed Doubles team Dana Kardonik ‘24 and Kyle Grimes ‘22 battled to the top, quickly overcoming the uncertainty of their new partnership.

“Coach put me and Kyle together just to see what would happen and we pretty much clicked immediately,” Kardonik said. “We won [the district final] by talking through our game strategy and figuring out what we should do to win. My net game was the best it’s ever been since I was more relaxed knowing that [Kyle] was at the baseline and could cover the ball if needed.”

The top two teams in each draw qualified to advance to Regionals. Boys’ Doubles team Aditya Paravasthuramesh ‘24 and Sibi Raja ‘25 came second against the Raja/Dhanani pairing in a close match, while Simryn Jacob ‘23 and Anwitha Duduka ‘25 also grabbed second place. Several players ended in third or fourth place, ending their journey to state but still competing at the highest level.

“It felt amazing to win third, especially since in the quarterfinals we won a very difficult match that we weren’t favored to win,” Evie Castellani ‘24 said. “[Janani Sivakumar ‘23 and I] didn’t even get to play too much together before the tournament, [but] the support and energy from the rest of the team during our quarters match was amazing. I went from not even playing [in the] lineup in the fall to getting third in one of the hardest districts in Texas.”