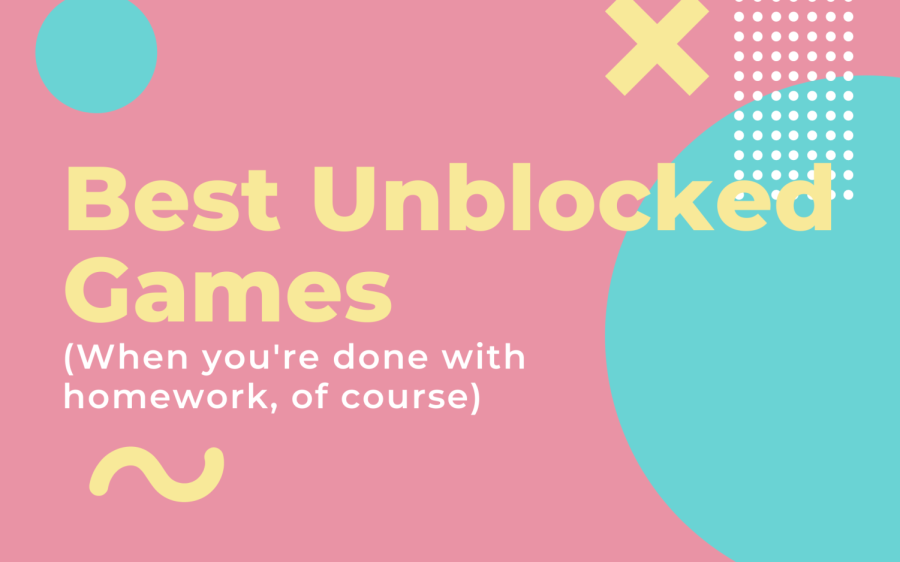 With the end of the school year, all of the best games and entertainment websites have been found to cure boredom. The student body has scoured the farthest corners of the internet to try and find games that are both worth playing and unblocked. Here is a list to hopefully ease the pain of finals.

1. The Dinosaur Game
The best 404-page-not-found game to ever grace the face of Google. It’s all about the little dino and how far you can make him run. Legend has it, the highest score on the game is 999,999. Then, as disappointing as it is, the entire thing resets to zero, and restarts as if you never even started.

2. NYT’s Wordle
Everyone’s favorite, classic Wordle. Initially released in October of 2021, the game has taken the internet by storm. Of course, as you’d expect, the game was created out of boredom as a result of quarantine the previous year. By designing the game to only be played once a day, Josh Wardle made the word game addicting, but also restricted gameplay so that players would have to return each day if they wanted to keep playing. It’s a perfect game that never seems to get boring.

3. Semantle
Word games seem to be taking over the world in 2022. By creating a somewhat-hard game about finding the closest word, David Turner took the idea of guessing a word to a whole new level. Input Mag describes it as, “‘Wordle’ on God-level difficulty.” At least on this website, thankfully, it’s not blocked.

4. 2048
The original addicting mind-numbing masterpiece that takes some decent amount of skill to win. With a game like this, it can be days from when you first started playing or months before you actually win. Countless other variations have been made to mimic the game, including Cupcake 2048, Cat 2048, and so many more. If you’re more interested because of the skill required, or you’re more invested in the coding or mechanics, here’s a list of every 2048 version. If you’re in love with the variety of images that can be used in the game, or more casual changes, here’s one for you.

5. Symmetry Artist
A website based on unlimited ways to create art, with a little seasoning of math? Sold. The variety of things you can do in this one is absolutely astounding. Based on my calculations, there’s over 1,735,603,200 possibilities. The craziest part? Where you place these lines and shapes is wherever you chose, so in reality, the choices are endless. You’d be surprised how cool this one is. Also, don’t forget; you can nudge any recent additions with the arrow keys! (P.S., those dark-mode lovers, there’s a toggle underneath the website’s logo)

6. Spent
Think you can survive a month of being a single parent with a minimum wage job? Prove it with this underground game.

7. The Oregon Trail
Nostalgic for many, Oregon Trail was recreated for desktop users in its original style and coloration… Or lack thereof. Playing this game may bring back those memories of sitting hunched over at a chunky computer, trying to make sure that your children survive the winter and that your wife can recover from snakebite. Catching those cattle, shooting deer and squirrels, trading with Native Americans and floating your wagon across the river bring back a strong sense of nostalgia. Just make sure that river isn’t any deeper than 3 feet. May you make it to Oregon, fellow settler.

8. Quick, Draw!
If you think you can draw a circle, you’ll be great at this game. Google already knows everything about you, now it just knows that you draw like a 3-year-old with broken crayons. Google knows your weaknesses. Run.

9. Neon Flames
Go to tweaks. Select worms. Touch the abyss. Simple as that and just as fun.

10. SuperCook
If you eat food, this is for you. Can’t find anything to make from the random stuff in your fridge? Input everything you have and this website will find the best recipes to work with your limited pantry. Really helpful for when you’re in a pinch, or you’re on the last couple days before your next paycheck. Or, of course, you can try to find recipes for molasses and dates. Enjoy your Natural Date Paste Sweetener!

Now all of these websites beg the question, what will remain unblocked? With the drama with Semantle being blocked then unblocked within the span of a week, it’s difficult to know for sure. Due to finals and attempts by the administrators to keep our productivity at an all-time high, all we can do is hope for the best. Hope you found these as fun and stress-relieving as possible as the year wraps up! May you pass your exams in a landslide, and may you never tell tech support about these splendid little games.