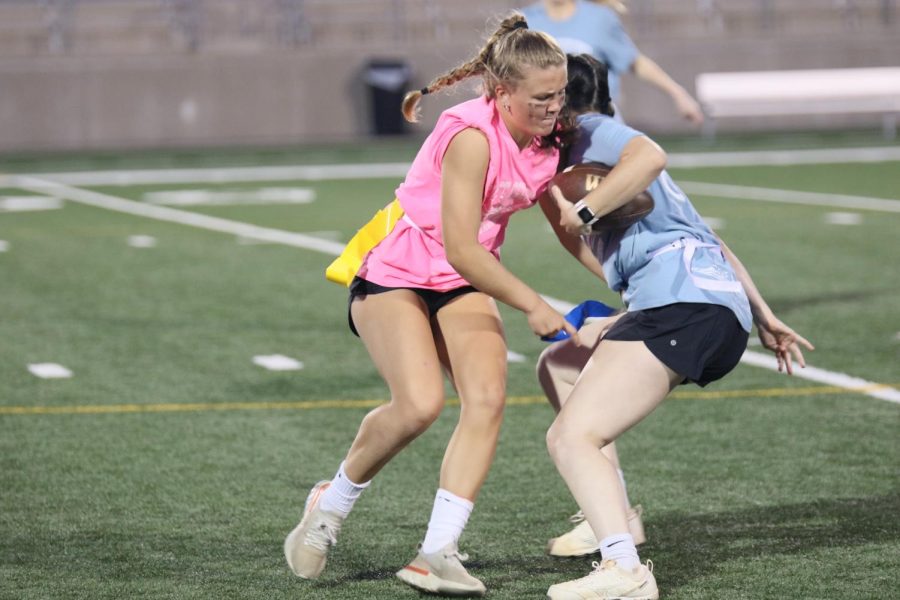 Atlee Olofson '23 blocks a player from the blue team from making a touchdown. The blue team was only able to advance a few yards before one of their players got their flag pulled.

National Honor Society (NHS) hosted their annual Powderpuff game on Thursday, April 28 at the Kelly Reeves Athletic Complex (KRAC) to raise money for the Thirst Project, an nonprofit organization that raises money to build wells in Africa. Due to Covid-19, the project hasn’t taken place for two years, and finally made a comeback this year. The Powderpuff game is one of many various events during Warrior Fest, through which NHS hopes to raise money to aid the Thirst Project.

To increase the amount of money raised during the Powderpuff game, there were a variety of concession stands throughout the KRAC. In addition, NHS officers went around collecting spare change in empty water gallons throughout the entirety of the event. The stands were filled with students sporting Thirst Project shirts. This year, the shirts for freshmen and seniors were blue, while the shirts for sophomores and juniors were pink. The event began with all the players and cheerleaders lining up on the sidelines, and sporting their blue and pink shirts as they were introduced. At the start of the first quarter, the pink team was quick to score a touchdown, and maintained this momentum until halftime. After the first two quarters, the pink team was in the lead, with a score of 22-16.

“I learned so much from [this experience],” Natalia Sosa ‘23 said. “I had so much fun, I felt competitive and I wanted to win. I was putting in all my effort, and the other girls were so good it was crazy.”

While the game was ongoing, the volunteer male cheerleaders were seen cheering on the sidelines. During halftime, K-Pop Club and the male cheerleaders performed, taking to the field to show off their dance moves that they had been putting weeks of practice into.

“[The dances] were fun but I got injured a lot,” Eric Gao ‘22 said. “It was difficult actually practicing and getting flexible enough to do what was necessary for the dance, [but my favorite part] was getting to hang out with the friends I performed with.”

After a great halftime show, the game felt tense in the last two quarters. The coaches of both teams did their best to explain plays to their players and encourage their respective teams.

“The most difficult part of coaching was keeping a balance between making sure the girls were fully prepared for the game, but also making sure they were all having fun,” Brian Lee ‘22 said. “ I’m a competitor but I knew I had to ease off on the gas at times.”

The encouragement from the coaches and successful execution of plays put the blue team in the lead. The blue team was quick to score back-to-back touchdowns with Gabbi Wallace ‘22 starting the touchdown “streak,” followed by Elizabeth Joyner ‘22,

‘22, and McKayla Ross ‘22 joining in on assisting more touchdowns for the team. With great efforts shown from both of the teams, the blue team ended up taking the win at the end of the last quarter with a score of 24-22.

“Making sure we executed our plays in time to avoid getting a penalty was maybe the most difficult thing for us,” Wallace ‘22 said. “Winning was a super great feeling, the whole team was so happy including our coaches and it’s just such a unique experience. We all celebrated together, it was great.”