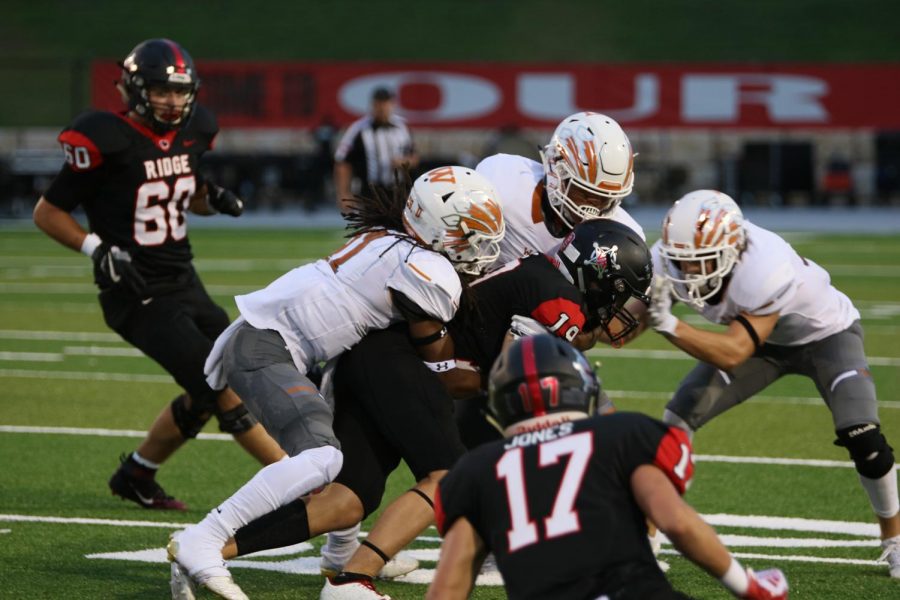 With the help of his teammates, Demetrius Jones ’19 takes down an opposing Vista Ridge player.

The varsity football team bounced back from a crushing loss and dominated the Vista Ridge Rangers on the road at Gupton Stadium with a score of 27-7. The Warriors scored on the first play from scrimmage – a RJ Martinez ‘21 82-yard rocket to a wide open Oliver Yu ‘20 – and never looked back, dominating the game from the start. Martinez played a big role in guiding the Warriors to their first victory over district competition, completing 17 of 25 passes for 299 yards, three touchdowns and an interception. The team’s defense also showed up, only allowing a single touchdown and consistently making big stops when it mattered.

“I feel like I did my job and everyone else did their job. I did my part and sometimes that’s just all you have to do to win a game,” Yu said.

Following the opening touchdown, the Warriors recovered the ensuing kickoff, but penalties and a bad snap halted the next offensive possession. The score would remain 7-0 for the remainder of the first half, as Vista Ridge missed a 40-yard field goal, and Ethan Brown ‘19 prevented a last-chance effort at a score with a sack to send the game to halftime.

In the second half, the Warriors began to move the ball efficiently, capping their first offensive drive of the half with Nate Anderson’s ‘21 13-yard touchdown run. On the subsequent kickoff, Jaleel Davis ‘20 set the tone for the defense with a big hit, and the defense picked up right where they left off with back-to-back tackles for loss from Josh Shoup ‘19 and a sack from Jackson Metzger ‘21.

After a fair catch interference penalty against Vista Ridge, the Warriors again marched the ball down the field for another touchdown, headlined by a Robbie Jeng ‘21 29-yard catch and a Luca Mazzola ‘19 11-yard touchdown reception. The defense again stopped the Vista Ridge offense, forcing a turnover on downs when it appeared that the Rangers might finally get on the board.

After a 58-yard catch and run by Mohan Hegde ‘19, the Warriors’ first miscue occurred when Martinez threw an interception deep down the field. However, the sophomore quarterback made up for his mistake by finding Hegde for a 26-yard touchdown pass, extending the lead to 27-0. Vista Ridge scored with about three minutes left in the ball game, but Warriors drained the clock to preserve the commanding victory due to Tavon Ousley ‘19 sealing the result with a few key rushes late in the game, wiping out any hope of a Vista Ridge comeback.

“I thought we came out well, executed about as well as we could have right at the beginning,” Coach Anthony Wood said. “And then I thought we had a few errors that took away some scoring options, but our defense played well. They contained their offense and minus just a few little mistakes, I thought we dominated the game.”

The Warriors gained their third win of the season, and their first in district play. They will prepare for a big showdown with rival Round Rock Dragons in the Battle for the Bell on Sept. 28.