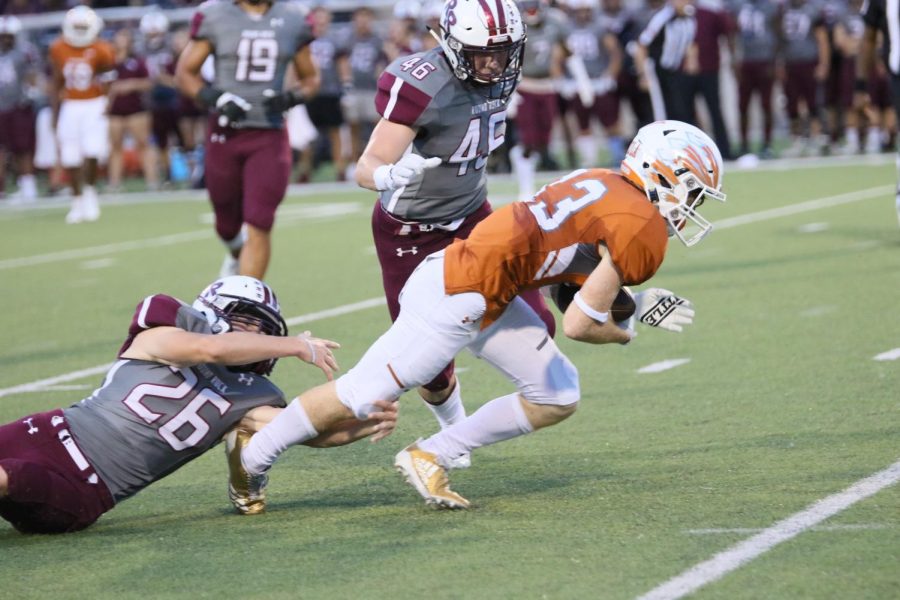 Sprinting towards the end zone, Luca Mazzola '19 escapes the grasp of a defending Round Rock player.

Varsity Football Falls in High-Scoring Battle to Round Rock

In a game that showcased lots of points and lots of rain, the varsity football team faced off against their arch-rivals, Round Rock, but fell in a shootout, with a score of 51-42. Despite the loss, RJ Martinez ‘21 threw five touchdowns, three to Luca Mazzola ‘19, with Robbie Jeng ‘21 and Mohan Hegde ‘19 claiming the other two touchdown receptions. Mario Debs ‘19 had a three-yard rushing touchdown as another contribution, with Nate Anderson ‘21 also running hard throughout the course of the contest.

On the first offensive possession of the game, the Warriors moved down the field very efficiently, which would become a trend that developed over the course of the game. The drive took 14 plays, but the result would be in the home team’s favor, with an 11-yard touchdown pass by Martinez to Mazzola putting Westwood in front. However, Round Rock quickly responded with two rapid touchdown passes of their own, but early in the second quarter, Martinez connected with Mazzola again to cut the Dragons’ lead to one, 14-13. After the Warriors recovered an onside kick which set the offense up in Round Rock territory, the sophomore quarterback threw his third touchdown of the half by finding Hegde for a 13-yard score, giving the lead back to the Warriors with the score being 20-14. After another Dragon touchdown, Jack Elliott ‘19 booted a 28-yard field goal to once again give the lead back to the Warriors, 23-22. However, Round Rock scored another touchdown to give the visitors the lead going into halftime, 28-23.

In the second half, the Warriors began to fall further behind, with the visitors scoring 16 unanswered points before Martinez threw his fourth touchdown of the evening, the third to Mazzola. After the final Round Rock score of the game extended the lead their lead to 51-30, Debs punched in a 3-yard rushing touchdown to pull the home team within 15 points, making the score 51-36 due to a failed two-point conversion attempt. With under a minute left in the game, Martinez spotted Jeng in the endzone for his fifth and final touchdown pass in the loss. Ethan Brown ‘19 recovered a late Round Rock fumble for the offense to possibly try and close the gap even further, but they had too little time to score again, as the clock hit zero.

“Me personally, I always feel like I can do better than the way I performed, I feel like I could have performed way more. For the most part, we all did pretty good, everyone focused on their assignments, but we just couldn’t pull it off today,” Anderson said.

Despite the game being an offensive shootout, Kam Colvin ‘20 and Damon Harris ‘19 stood out on the defensive side of the ball, with Colvin collecting numerous tackles over the course of the contest, while Harris recorded yet another sack of the season. Although the result wasn’t in the Warriors’ favor, the players remained optimistic about their performance.

“[The game] was alright, obviously it didn’t go in our favor, but I thought we fought pretty well,” Mazzola said.

The tough loss drops the varsity team to 3-2 for the season, as the Warriors will look to quickly forget the outcome of this week and prepare for the upcoming showdown with another district foe, this time taking on the McNeil Mavericks on Oct. 5.