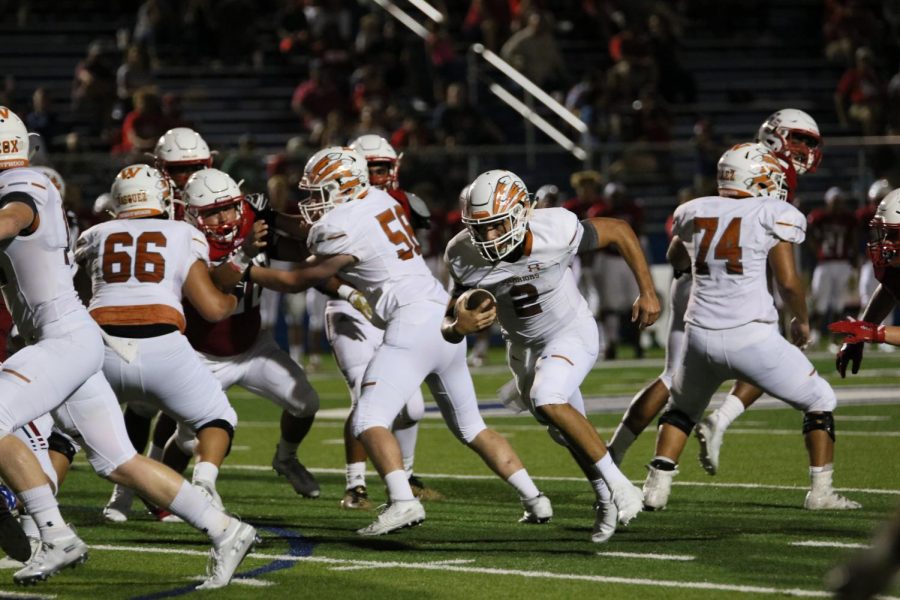 RJ Martinez ’21 finds an opening in the Patriots’ defense.

The varsity football team kicked off their 2018-19 campaign with a convincing victory over the East View Patriots on the road, finishing with a score of 38-21. After falling behind 3-7 early, the Warriors scored 35 unanswered points to quickly put the game out of reach for the Patriots. RJ Martinez ‘21 lit up the Patriot defense in the passing game, finishing 21 for 32 for 222 yards, while Nate Anderson ‘21 and Mario Debs ‘19 got it done on the ground, finishing with 103 and 101 yards respectively. Matt Pravednikov ‘19 also contributed 9 receptions for 123 yards.

These were the varsity debuts of Martinez and Anderson, who have had to fill big shoes at quarterback and running back, respectively. The duo looked sharp in their first game under the Friday night lights, and were vital in the season-opening victory.

“It’s a good feeling because I know that my hard work has paid off, not even just this past off-season, but off-seasons before that, it just carries all the way back when I was a young boy just playing football in my backyard, so it’s definitely a great feeling,” Martinez said.

After a quick stop by the Westwood defense to begin the game, headlined by a sack by Damon Harris ‘19, the pair of Debs and Anderson easily ran through the East View front seven before stalling inside the red zone and settling for a 33-yard field goal by Jack Elliott ‘19. However, East View moved the ball with ease on the next drive, giving the Patriots a 7-3 lead before the end of the first quarter.

In the second quarter, the Patriot offense looked to score again before another drive-killing sack by Harris. From there, the Warriors took over, scoring 21 points in the second quarter alone, with a dominant performance on both sides of the ball headlined by a 70-yard run by Anderson, two rushing touchdowns from Martinez, a 13-yard touchdown from Luca Mazzola ‘19, and multiple stops by the Westwood defense, including a key pass breakup by Darrian Deberry ‘19 to put Westwood up 24-7 at halftime.

In the second half, Pravednikov set up another eventual rushing touchdown by Martinez with a 20-yard catch prior to that to put the score at 31-7. The defense also did their part, with Connor Cooper ‘20 forcing a fumble and Zach Hoover ‘19 recovering when it looked like East View would finally score. Pravednikov would put the game on ice in the fourth quarter with a 17-yard touchdown reception to put the score at 38-7. East View would later respond with two late touchdowns, but the lead would prove to be insurmountable, as Westwood emerged victorious in the opening game of the season.

“I think it [the game] had its up and downs but I think in the end, we pulled through. We came together as one unit, and played as a team. Honestly, [we need to work on] just individual skills and just knowing each other better,” Nathan Potter ‘20 said.

The Warriors finished with a whopping 466 yards of total offense, as it seemed like the Patriots had no answer for anything Westwood threw at them, as the Warriors came into Georgetown ISD Athletic Complex firing on all cylinders.

“I think Westwood fans should get used to us scoring a lot of points and our defense holding them to less than 21 points and I just wanna thank our offensive line, they did an amazing job for us up front. We established the run early so that really helped us in our win tonight,” Martinez said.

This result is certainly a bright start to the season for Westwood, as the Warriors only look to take positive strides as the season progresses.

“You know every day we’ve just gotta strive to get better; we’ve got to be better tomorrow than we were today. As long as we continue to do that and do the right things, then great things are going to happen,” Coach Anthony Wood said.

The Warriors will seek to build on this convincing season-opening victory, as they prepare to clash with the Austin Maroons on Sept. 7.