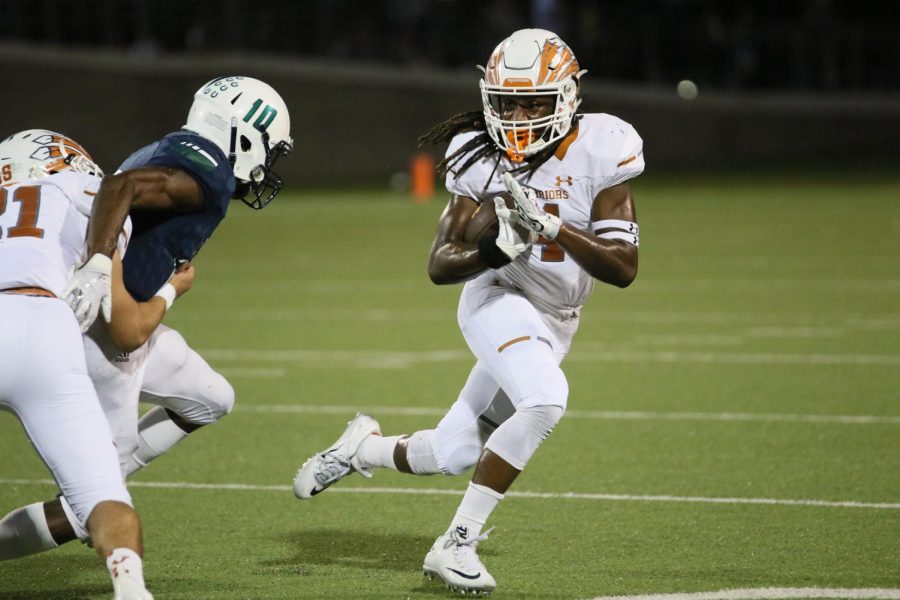 While running up the field, Nate Anderson ’21 looks to dodge an oncoming McNeil defender.

The varsity football team faced off with rival McNeil looking to notch their fourth win on the season, but fell in gut-wrenching fashion by a score of 32-29. The Warriors weren’t able to rebound after last week’s defeat against Round Rock, but once again kept the match very competitive until the end of the game. The running attack was prominent, as Mario Debs ‘19 had 16 carries for 137 yards, while Nate Anderson ‘21 finished with 100 yards on 21 carries.

The first big play for the Warriors came on defense in the first quarter, where Darrian DeBerry ‘19 snagged his first interception in the end zone, saving a possible McNeil touchdown that would have extend the 3-0 lead that McNeil obtained prior to DeBerry’s interception. In the second quarter, DeBerry collected his second interception of the game, once again preventing McNeil from score. After committing a bad snap resulting in a safety, making the score 5-0 in favor of McNeil, the Warriors gave up a touchdown to McNeil to fall behind 12-0. From there, the offense finally started to get going, as Debs scampered for a 24-yard score to cut the lead to five, 12-7. Another McNeil touchdown sent the game into halftime with the Warriors down by twelve, 19-7.

In the second half, the Warrior offense found their groove, as they started to drive down the field with ease. The Warriors opened the second half with a 69-yard touchdown drive with Lynden Jones ‘20 capping off the drive with a 4-yard touchdown run to make the score 19-14 in favor of McNeil. McNeil answered with another touchdown to end the third quarter with the score 25-14 Mavericks.

The fourth quarter proved to be the most entertaining twelve minutes of the contest, with both teams trading punches and going back and forth, putting the crowd on the edge of their seats. The final quarter of play began with an Anderson 13-yard touchdown run on a crucial fourth down, with the Warriors also completing the two-point conversion — a successful double reverse pass from Robbie Jeng ‘21 to Martinez, cutting the deficit to only three points, 25-22.

A key defensive stop led to a McNeil punt and another Warrior offensive possession. The offense marched 89 yards down the field, with Debs giving the Warriors their first lead of the night thanks to a 27-yard touchdown run after Jeng pulled in a crucial 14-yard reception on fourth down, putting the score at 29-25. However, McNeil quickly responded with a touchdown of their own, putting the Warriors behind once again, this time by the score of 32-29.

With two minutes left in the game, the Warriors needed a field goal to tie or a touchdown to pull a victory from the jaws of defeat. The Warrior offense moved 43 yards from their own 30-yard line to the McNeil 27, but Jack Elliot ‘19 barely missed a game-tying 44-yard field goal by mere inches as time ran out, effectively ending the game with the Warriors falling in a disappointing result, 32-29.

“There were definitely things in this game where I could’ve gave more, could’ve [done] better, could’ve picked up a better block. I could’ve ran harder. I’m not feeling very great about this game,” Anderson said.

The Warriors will have a week off to rest and prepare to play Vandegrift for Homecoming on Oct. 19.