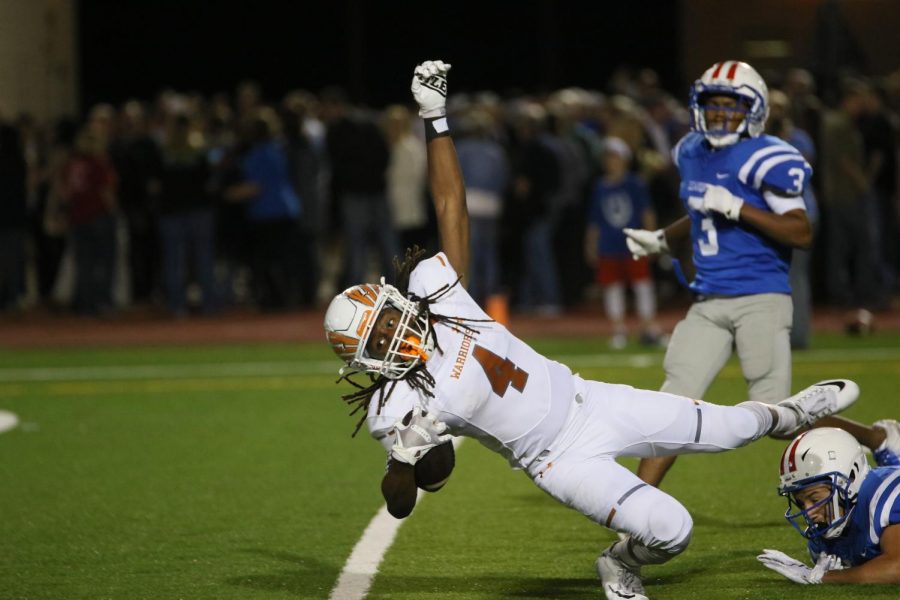 Clinging onto the ball, Nate Anderson ’21 reaches for the end zone.

The varsity football team was able to bounce back from three straight losses as they dominated Leander on the road at Bible Stadium, winning by a score of 49-27 on the cool night of Oct. 27. The offense was firing on all cylinders, as RJ Martinez ‘21 accounted for 320 total yards, 205 yards passing and 115 yards rushing, as well as rushing for four touchdowns and throwing for two touchdowns. Nate Anderson ‘21 also added a touchdown run. The Warriors racked up 478 yards of total offense, as they had their way with the Lion defense throughout the course of the game.

“I think we came out and did our job, defense did their job, the line got us really started up front and that’s how we got the win,” Martinez said.

The Warrior defense gave up a touchdown on the opening possession, but Demetrius Jones ‘19 was able to block the extra point, leaving the score at 6-0. However, the Warriors countered with a nine-play, 69-yard touchdown drive of their own, with Martinez punching it in from a yard out to make the score 7-6, putting the Warriors in the lead. Leander scored again to regain the lead as time was running out in the first quarter, making the score 13-7 in favor of the Lions.

The offense was able to respond to Leander’s touchdown with another Martinez touchdown run, this time from 15 yards out to take the lead for good, 14-13. After Martinez’s second touchdown run, the Warriors never looked back, quickly opening up the lead and turning the game into a blowout as Leander consistently had no response to the Warriors’ consistent trend over the course of the match – drives that resulted in points. The Warrior defense was able to make adjustments after giving up the first two touchdowns and took the Lion offense out of the game for the most part.

“I thought our kids came out and they played hard. They did the things right during the week in order to get the victory tonight. So, just proud of their effort and proud of how they played tonight,” Coach Anthony Wood said.

After the defense forced a Leander punt, Anderson’s 18-yard touchdown run put the score at 21-13. On the subsequent defensive possession, the Warriors were able to provide the offense with some favorable field position after a Leander error on a punt set the Warriors up deep in Lion territory. Not long after the big special teams moment, Martinez connected with Mohan Hegde ‘19 on a 23-yard strike to increase the lead even further, making the score 28-13 heading into halftime.

“I think what we could do different is really execute more, especially down at the goal line. I feel like we need to execute a little bit better down there,” Martinez said.

The Warriors’ momentum carried over from the first half into the second half, as Martinez bolted for a 26-yard touchdown on a fourth down, thus making the score 35-13. The Lions were able to answer with a touchdown run of their own to decrease the lead to 35-20 entering the final 12 minutes of the game. In the fourth quarter, Martinez’s fourth rushing touchdown – this one from three yards away – gave the Warriors a 42-20 lead after an earlier 52-yard run from Martinez was able to spark the scoring drive.

On the next defensive series, Damon Harris ‘19 forced a fumble and Kameron Colvin ‘20 was able to recover the loose ball in Leander territory, setting up the Warrior offense for yet another touchdown. This time, after a Robbie Jeng ‘21 37-yard reception, Ian Cox ‘19 caught a 6-yard touchdown reception to remove all doubt of a potential Leander comeback, making the score 49-20. The Lions were able to tack on another touchdown to put the scoreline at 49-27, but by then, the result of the game was already decided, with the Warriors snagging a well-earned and crucial victory, their fourth win of the season.

“[The game] went just like we had hoped for. Our ultimate goal is to win and I thought our kids did a great job of executing the game plan tonight,” Coach Wood said.

The Warriors stop the recent losing streak and improve to 4-4 after the big win and notch their second win in district play as they now look forward to another district clash, this time with Stony Point on Thursday, Nov. 1 at Kelly Reeves Athletic Complex.