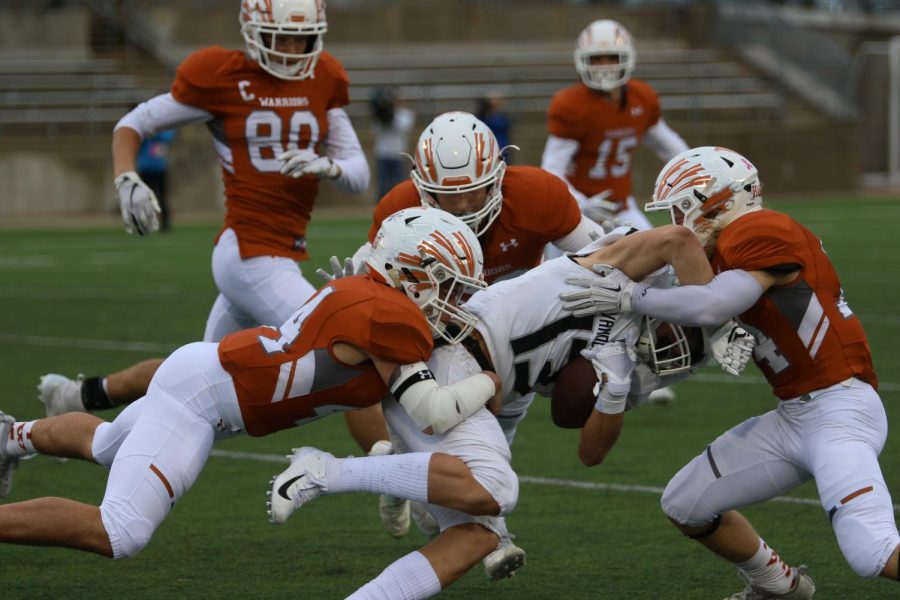 Seniors Will Clitheroe and Zach Hoover grab onto a Vandegrift offensive player while Connor Cooper '20 rushes over to help.

Coming off a bye week, the varsity football team took on Vandegrift looking to break out of their recent losing skid, but fell to the visitors with a score of 21-12 on Homecoming night. Although the offense had its struggles at times, the defense played well throughout the duration of the game, forcing two turnovers and mainly limiting the Vandegrift offense. RJ Martinez ‘21 completed 13 of 19 passes for 152 yards, but also threw three interceptions. Nate Anderson ‘21 also had a rushing touchdown. On defense, Nathan Potter ‘20 had a crucial interception to get the Warriors back into the game, and Demetrius Jones ‘19 recovered a fumble and took it 90 yards to the house to cut into the lead.

“I don’t think I played up to my full potential, I hold myself to higher expectations. The game could’ve been better in my opinion but we’ll do better next time,” Jones said.

Vandegrift took the lead quickly in the first quarter on a run for a touchdown, but the Warrior defense was able to stiffen and stop the visitors on multiple fourth down attempts to prevent the deficit from increasing. In the second quarter, the Warriors looked as if they were putting a drive together, marked by 11-yard and 38-yard catches from Mohan Hegde ‘19, but ultimately couldn’t convert on fourth down, turning the ball over with very little time until the first half ended.

At halftime, Homecoming sweetheart and beaus from various organizations were recognized on the field. The Homecoming court was also honored and crowned; Ani Sreeram ‘19 and Vivian Tran ’19 were voted Homecoming King and Queen.

At the start of the fourth quarter, Potter intercepted a Vandegrift pass and returned it all the way to the Vandegrift 4-yard line, giving the Warriors a lifeline to get back into the game. The offense was able to capitalize on the great field position, as Anderson muscled his way in for a two-yard rushing touchdown. A missed extra point saw the deficit stay at 14-6.

On the next drive, Vandegrift appeared to be on their way for another score to extend their lead, but Jones had a miraculous 90-yard fumble recovery for a touchdown to shrink the lead to two, 14-12. The two-point conversion attempt to tie the game failed.

“I didn’t stop. I didn’t quit, and things happened. That’s defense, those were the plays we were expected to make. The plays we made should’ve come up earlier, but we didn’t have enough time,” Jones said.

The defense forced another stop on Vandegrift’s next offensive series, but a muffed punt return allowed the visitors to score with ease from good field position, as the Warriors now faced a 21-12 deficit with only about two minutes left in the game. Martinez’s third interception of the night on the Warriors’ final offensive possession sealed the loss.

“I’m never satisfied with my performance, and there are some things I feel like I could have done better. I always feel like there’s just one more thing I could have did better,” Anderson said.

Despite giving up 21 points, the Warrior defense played a very good game. Damon Harris ‘19 had two sacks, and Vicente Ochoa ‘20 and Kam Colvin ‘20 flew all over the field, racking up numerous tackles. On the offensive side of the ball, Hegde finished with four catches for 77 yards to lead the Warriors’ receivers.

“I want us to come up with a victory and bounce back. That would be great for us,” Anderson said.

The Warriors fall to 3-4 on the season, and will look to snap their three-game losing streak as they prepare to face Leander on Oct. 26 to try and get back to winning ways.