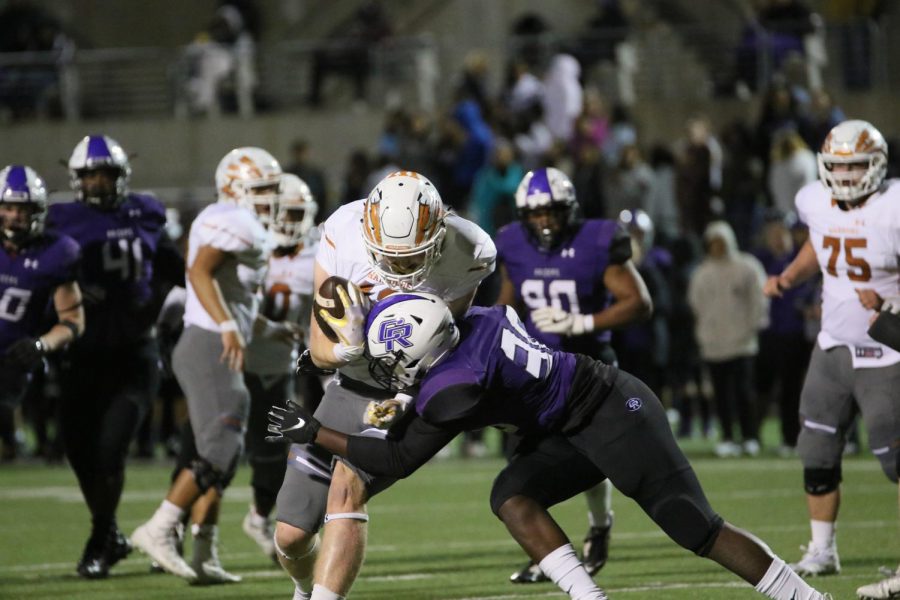 Ian Cox ’19 slams into a Cedar Ridge defender while scoring a touchdown.

The varsity football team saw their season come to an end on Nov. 9 with a 49-20 defeat to the hands of the Cedar Ridge Raiders. The Warriors looked to close out their season on a positive note, but weren’t able to produce an ideal result. In the final game of the season for the Warriors, RJ Martinez ‘21 finished with 109 yards passing and 42 yards rushing, and Nate Anderson ‘21 led the ground game with 19 carries for 70 yards. Tavon Ousley ‘19 added a rushing touchdown, and Ian Cox ‘19 caught a touchdown reception.

The Warriors end this year’s campaign with a 4-6 overall record, as well as finishing 2-6 in district play.

The Warrior offense was forced into two early punts on their first few possessions, and Cedar Ridge opened the scoring with a quick touchdown run to put the Raiders ahead 7-0. After the defense forced a punt on their second drive, the offense was able to move down the field with ease until Martinez had a pass tipped at the line of scrimmage and into the hands of a Cedar Ridge defender for an unfortunate interception. Cedar Ridge was able to score another touchdown on the following drive after the interception, with the Warriors finding themselves down two touchdowns by the end of the first quarter, 14-0. It didn’t get much better for the Warriors, as two more touchdowns by the Raiders had them down 28-0 at the halftime whistle.

“We made some mistakes early. The game kind of got out of hand early on so we weren’t able to do some of the things we thought we could but for the most part I thought the kids played hard,” Coach Anthony Wood said.

After another Cedar Ridge touchdown to begin the second half, the offense began to show some signs of life, putting together their most complete drive of the game up until that point, with Martinez capping off the first scoring possession of the game for the Warriors with a run for a touchdown to make the score 35-7. The Warriors then recovered an onside kick to regain possession, but couldn’t put together another successful scoring drive, turning the ball over on downs. Cedar Ridge was able to capitalize on the turnover, scoring again to increase the Warriors’ deficit, 42-7.

On the ensuing offensive series, the Warriors responded with a touchdown of their own after a grueling 17-play drive, highlighted by a crazy Demetrius Jones ‘19 30-yard reception after the ball was tipped by two Raider defenders. Cox’s three-yard touchdown reception made the score 42-14 in the fourth quarter, but Cedar Ridge countered the touchdown catch with a touchdown of their own. Ousley’s three-yard touchdown run would prove to be the last score of the Warriors’ season, as the game ended 49-20 after Jack Elliott ‘19 missed the extra point.

“I think the guys realized that all the things that were going on were self-induced. It was us not being able to do what we should be doing. I think we figured that out and we didn’t make as many mistakes in the second half which gave us an opportunity to be successful,” Coach Wood said.

After the loss, the players were left to reflect on another season that flew by in a hurry.

The team will now look forward to the off-season in order to improve and train for the spring season in April.