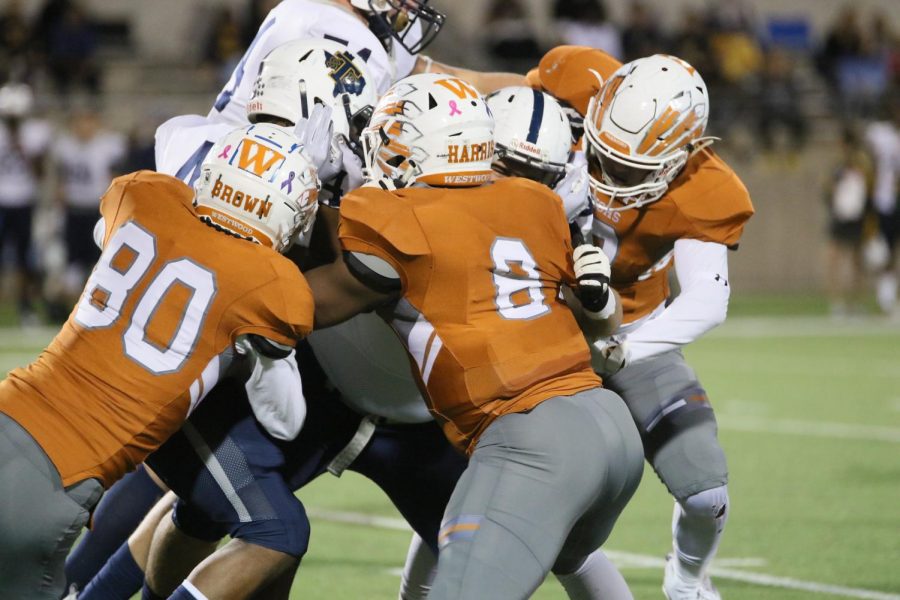 Seniors Ethan Brown and Damon Harris work together to take down a Stony Point running back.

The varsity football team traveled to Kelly Reeves Athletic Complex to square off against the Stony Point Tigers in an important district matchup, but couldn’t come out with the win on the team’s only Thursday night game of the season on Nov. 1, falling to the visitors by a score of 31-17.

Mohan Hegde ‘19 was able to catch a touchdown pass from RJ Martinez ‘21 for the Warriors’ first score of the match, and Nate Anderson ‘21 added an 10-yard touchdown run as well. Jack Elliott ‘19 also added a 29-yard field goal. However, Stony Point found ways to counter the Warriors’ scoring drives, resulting in the Tigers taking the lead for good in the second quarter as the Warriors started to fall behind.

Stony Point opened the scoring for the night with a chip-shot field goal to put the Tigers ahead 3-0. After the field goal, Anderson bolted for a 37-yard return into Stony Point territory, allowing the Warriors to have a shorter field to operate with and answer the Tigers’ field goal with Hegde’s touchdown catch from four yards out, putting the Warriors ahead 7-3. Just before the first quarter’s conclusion, the Tigers retook the lead due to a short touchdown run with about a minute to go, making the score 10-7 in favor of Stony Point as the quarter ended.

The Warriors’ next scoring drive only took one play from 10 yards away — Anderson’s touchdown run— thanks to the special teams unit quickly applying pressure on a Stony Point punt prior to the touchdown. Jaleel Davis ‘20 and Ethan Brown ‘19 tackled the Tigers’ punter at Stony Point’s 10-yard line, preventing the punt and giving the Warriors very good field position. Anderson was able to take the ball himself for the score from there, setting the score at 14-10 in favor of the Warriors. With about five minutes left in the first half, the Tigers responded to Anderson’s touchdown with a long touchdown pass of their own to retake the lead, 17-14. The Tigers would not squander the lead from then on, as Elliott missed a 49-yard field goal to tie the game heading into halftime, with the Warriors still trailing.

“The first half, we were doing really well,” Mario Debs ’19 said. “We were executing our plays and we were all playing hard.”

In the second half, however, the Warriors weren’t able to keep pace with the Tigers; the Warrior offense began to get shut down by the Stony Point defense and couldn’t move the ball with as much ease as they did in the first half. Stony Point started to extend their lead, with another long touchdown pass to increase the Warriors’ deficit to 10 by a score of 24-14. On the next drive, Elliott made up for his miss at the end of the first half by converting his second field goal attempt of the night to cut the lead to seven, 24-17.

“We had some bright spots, but we also had some areas where we lacked in tonight. Our goals are just to grow as a brotherhood and get closer as a team and work on stuff that we can work on,” Brown said.

The field goal was ultimately the last score the Warriors were able to conjure up for the remainder of the game, as Stony Point pushed the lead to 14 in the final quarter of action because of a touchdown run inside the Warriors’ 10-yard line. The Warrior offense couldn’t complete another scoring drive to re-establish the thought of a possible miraculous late comeback, with Martinez throwing two late interceptions to seal the result in favor of the Tigers, as the game ended with the score being 31-17.

“We just couldn’t get the running game started since Mario [Debs] was hurt, so we have to establish a running game to open up the passing game,” Robbie Jeng ‘21 said.

On the defensive side of the ball, Connor Cooper ‘20 recorded plenty of tackles, Demetrius Jones ‘19 forced a fumble, and Brown also contributed a sack.

The costly loss drops the Warriors to 4-5 on the season with one final game left to play, a critical match against district foes Cedar Ridge. The final match of the regular season will be on Nov. 9.