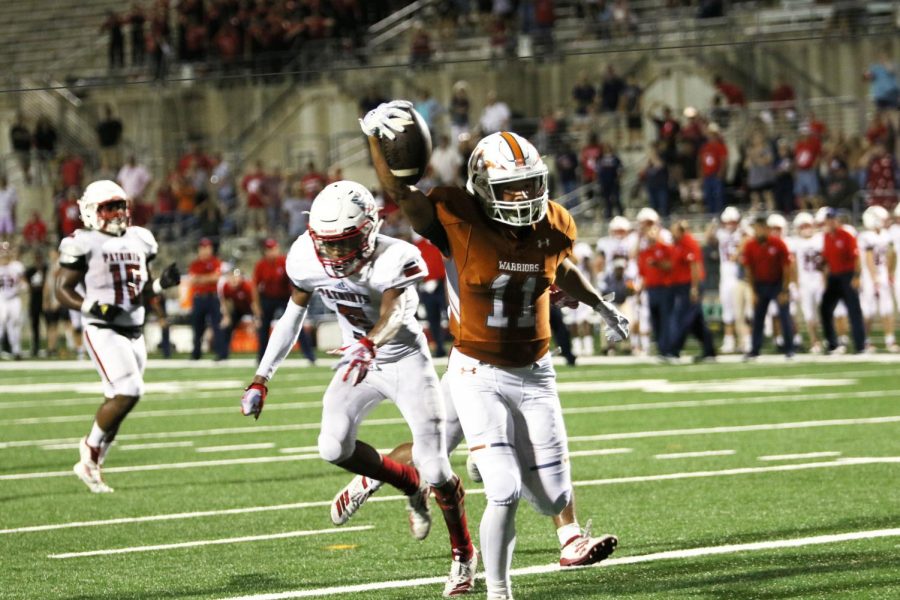 Reaching out, wide receiver Oliver Yu ’20 sprints into the end zone. Yu’s touchdown tied the score and sent the game into overtime. “I felt vindicated because it’s what I was waiting for the entire game. It’s what keeps you going in the end, just making plays like this,” Yu said.

Energy levels were high and many jersey-clad students packed the stands on Thursday, Aug. 29, ready to see the varsity football team take on the East View Patriots in the team’s season opener at the Kelly Reeves Athletic Complex. It was a highly competitive, intense back-and-forth affair until the very end. It came down to the final play, but, unfortunately, the Warriors were denied a win by the visiting Patriots, with East View coming out on top 42-35.

“Overall, we definitely needed to finish more tackles. We needed to stop trying to just run after people and actually wrap up. I think that’s what killed us, just missing tackles,” Josef Borkowski ‘21 said.

Quarterback RJ Martinez ‘21 did it all in this contest, accounting for all five touchdowns the Warriors scored, and finishing with a whopping 401 yards passing on 37 completions. Running back Nate Anderson ‘21 also had a productive game on the ground, totaling 113 yards on 24 carries in addition to five catches and a receiving touchdown. The quartet of wide receivers – Oliver Yu ‘20, Julian Deberry ‘21, Jace Lyne ‘20, and Robbie Jeng ‘21 – all showed out as well; Yu and Deberry snagged ten catches apiece, Lyne notched 135 yards and a touchdown, and Jeng tallied seven receptions for 66 yards.

On the defensive side of the ball, linebacker Jaleel Davis ‘20 had eight tackles and contributed to a sack and a forced fumble, while Drew Goodall ‘21, Connor Cooper ‘20, and Kam Colvin ‘20 recorded seven tackles each.

To start out, the Warriors had a pretty uneventful opening drive, with the highlight of the possession being a 12-yard run from Anderson; the Warriors were eventually forced to punt. The visitors were able to march 69 yards down the field on their first drive of the year to score shortly after, making the score 7-0 in favor of the Patriots. The next offensive series, the Warriors began playing a more up-tempo style of offense, and it worked. Martinez was able to cap off a solid 13-play drive by breaking a seemingly sure sack and scampering for seven yards to level the score. With that touchdown, the scoring in the first quarter came to a close, and the first frame of play ended with the score being all knotted up, 7-7.

The defense was able to make a big play to start the second quarter. As East View was driving down the field again, Davis and Vicente Ochoa ‘20 combined to force a fumble on a sack, and the Warriors were able to recover, flipping possession. The offense capitalized on the turnover, going 67 yards to score another touchdown in the form of another Martinez run, this time from only one yard out.

“We prioritized getting after the quarterback, and our goal was just to not let him get outside [the defensive line’s] grasp,” Borkowski said.

The Warrior defense forced a three-and-out after the score, and after possession changed hands yet again, Lyne was able to take a pass 81 yards to set the Warriors up inside the five-yard line. However, a fumble on the very next play allowed East View to get back on offense, a crushing end to a promising drive. The Patriots were able to even the score at 14 with just a little under two minutes to go in the half.

East View began the second half on offense, and the Patriots were able to put up a touchdown on their first series of the half to get back on top, 21-14. A three-and-out from the Warrior offense gave the ball back to the visitors, and they were able to score yet another touchdown, this time on a 29-yard catch-and-run to make the greatest margin of the game, 28-14. In search of a response, the Warriors were able to answer with a touchdown of their own. Thanks to big plays from Lyne, Jeng, and Deberry, the Warriors got in position to cap off the drive with a five-yard touchdown reception for Anderson. Anderson’s touchdown would be the last score of the third quarter, and the score was 28-21 with the game heading into the last stage of regulation.

Shortly after the fourth quarter started, Lyne caught a 23-yard touchdown pass to tie the game at 28 apiece. The defense was able to come up big time and force a crucial punt, but on the ensuing series, the Warriors failed to convert a fourth down attempt with a Martinez run coming up just a few feet short of the yard marker. In ideal field position, the Patriots were able to score another touchdown and regain the lead, setting the score at 35-28 with only a few minutes left to go in the fourth. Needing a touchdown, the Warriors dinked and dunked their way down the field, and Yu nabbed a clutch 11-yard touchdown pass with 22 seconds to go to even the scoreline again at 35-35. East View let the clock run out, and the game went into overtime.

“We were just playing with good technique, how we always strive to play. We were in our two-minute offense, since we were on a time crunch, and we just needed to get yards and score,” Brian Lee ‘22 said.

In overtime, the Patriots needed only one play to score a touchdown, leaving the Warriors with no option other than to answer with seven points of their own. The Warriors got down to the ten-yard line, and a couple of plays later, they were on the cusp of tying the game and forcing a second overtime period. However, East View was able to make a goal-line stand, denying the Warriors of a response and dealing them a heartbreaking loss.

“They just wanted it more than us that time. We just didn’t do our assignments right, and we didn’t play like we were supposed to,” Will McKee ‘21 said.

The Warriors will look to forget the tough defeat as they prepare for their next game against the Austin High Maroons, which will be downtown at House Park on Friday, Sept. 6.