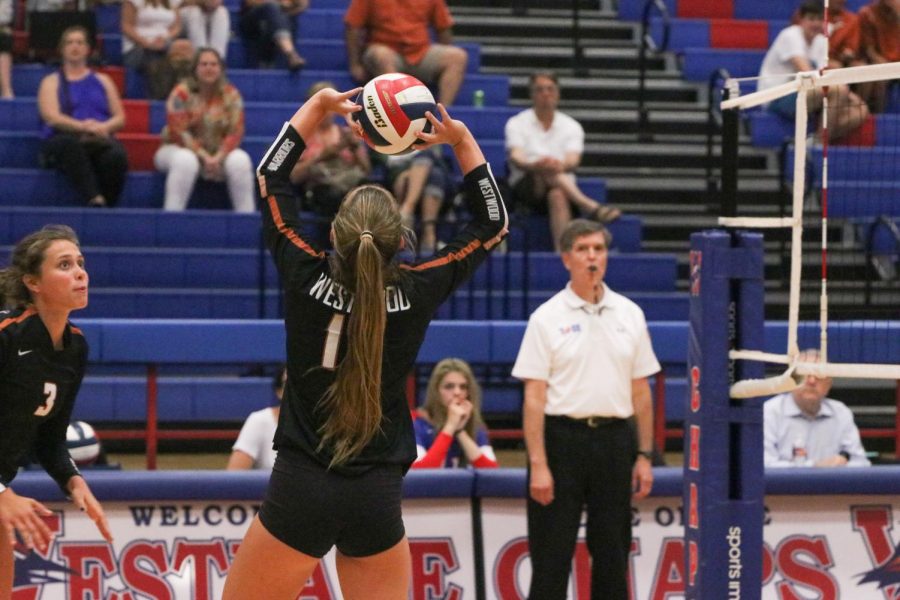 Kenzie Beckham '21 sets the ball. This play ended with Westwood winning the point.

On Tuesday, Aug. 27, the varsity volleyball team played against Westlake in an intense back-to-back game. The ladies defeated the Chaparrals 3-0.

“The game was tough but we worked really hard to finish it in three sets,” Audrey Quesnel ‘20 said.

For the first set Westlake served first and captured the first point of the game. The Lady Warriors managed to score their first point with a middle block from Quesnel. The team found a rhythm and scored back-to-back points with serve aces from Maddie Gillispie ‘20 and hits from Abby Gregorczyk ‘21 and Zoe Menendez ‘20, making the score 8-1. Westlake cut the Warriors’ rhythm with three outside kills into the defensive holes, making the score 8-6. To keep the Chaparrals from catching up, Quesnel made a fast hit through Westlake’s blockers. The two teams were neck-and-neck, with kills and blocks from both sides. Kenzie Beckham ‘21 made a gap in the score with a successful dump into deep corner, making the score 15-14. Later, Gillispie and Lola Fernandez ‘23 kept the ball in play during an intense long rally, but the Lady Warriors gained the point when Westlake’s hitters hit the ball out, making the score 18-16. The Warriors continued the two-point gap with blocks from the front row. The Lady Warriors were the first to hit the twenty-point mark, 20-17, with an in-between block kill from Gregorczyk. The ladies finally hit game point, 24-21, with a dump from Beckham, but the Chaparrals caught up from kills. A middle hit from Quesnel made the Warriors win the set 25-22.

“We did a good job starting off strong,” Quesnel said. “We got a lot of good serves and kills in.”

The Warriors started the set off with a serve and Quesnel gained their first point with a kill. Beckham continued to score with dumps and hits from the front row, making the score 5-3. Westlake caught up with the ladies with roll shots off the blockers, to make the score 8-8. The second set became a nail biter with both teams scoring back-to-back, not letting anyone rest. Westwood picked up the momentum with a straight line kill from Erin Fagan ‘22, turing the score 20-17, with the ladies being the first team to hit the twenty-point mark. Westlake found holes in the Warriors defense and closed the gap, forcing the Lady Warriors to take a timeout at 22-22. Westlake hit game point, 24-23, by the Lady Warriors hitting the ball out of the court. Quesnel tied the game with a middle kill, preventing Westlake from winning the set. Beckham dumped into the Chaparrals holes with the ladies pushing game point, 25-24. Beckham finished the set with an ace float serve, wrapping up the set 26-24.

“We got stuck in the middle but we managed to pick up ourselves,” Gillispie said.

At the start of the second set, Westlake scored the first point off a serve ace but the Lady Warriors gained their first point with Westlake hitting the ball out. With Gillispie’s serves and right side kills from Menendez, the ladies pushed forward, turning the score 7-1. Westlake eventually tied up against the Warriors with kills, turning the tables around, 9-9. Menendez and Beckham teamed up and increased the Warriors’ lead with kills, regaining the lead 14-11. Westlake caught up to the Warriors but a double block by Menendez and Quesnel, making the score 16-17. Menendez made the Warriors gain the rhythm with a ten-foot kill. A single block from Quesnel made the Lady Warriors hit the twenty-point mark first, 20-18. A block from Quesnel made the Warriors hit game, 24-18, the Chaparrals not catching up. An out of court hit from Westlake finished the game 25-18, with the Lady Warriors prevailing.

“The future seems bright for our team and I think we are going to do very well this season,” Gillispie said.

The varsity volleyball team will be heading to Stony Point on Friday, Aug. 30.