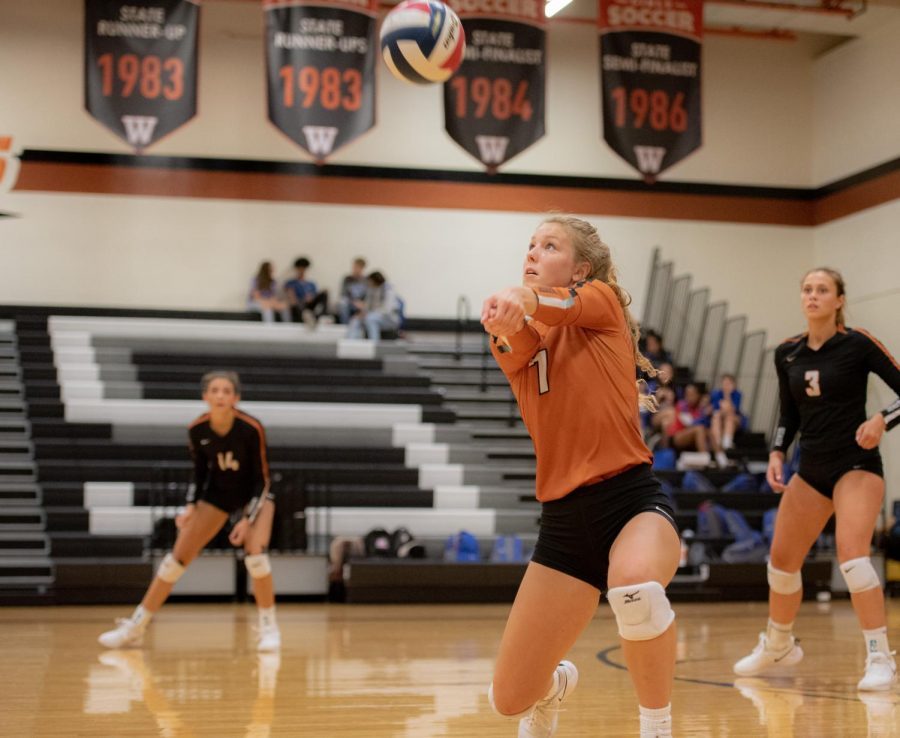 On Tuesday, Aug. 20, the varsity volleyball team crushed the Hays Rebels 3-0 in the first game since school started. The bleachers were packed with the support of parents, students, and alumni.

“We played really well last night,” head coach Tara Nelson said. “I wasn’t expecting us to come out swinging the way we did. Any time you can sweep a team in three sets is a win.”

After the introduction to the varsity team, Hays served first but Zoe Menendez ‘20 got a kill from the right side to grab the first point for the Warriors. The team managed to stay ahead of the Rebels with dumps in Hays defensive holes from Kenzie Beckham ‘21 and more kills from Menendez. During a long rally, the Rebels kept digging up hits but Audrey Quesnel ‘20 stopped them with a kill from the middle. To stop the Warriors’ lead from increasing beyond 14-7, Hays called a timeout. Despite that, the Lady Warriors kept scoring with Quesnel hitting and Abi Rucker ‘19 serving aces around the court. The first set ended with the Warriors winning 25-15 as Abby Gregorczyk ‘21 slammed the ball in between Hays blockers.

“The game went really well in our favor,” Erin Fagan ‘22 said. “We really stepped up and finished the game in three sets.”

With momentum from winning the first set, Westwood served first in the second set but Hays managed to win the point from a hitting error from Gregorczyk. Beckham gained Westwood’s first point by an unexpected setter dump, but Hays stole the lead 7-2, gaining momentum with each point. Beckham managed to stop their momentum with a setter dump, and Westwood soon tied the Rebels 8-8 with a middle attack from Mckayla Ross ‘22. Hays fought for the second set by finding holes in the Warriors defense to take the lead 12-10. Blocks from Quesnel and Ross stopped Hays from increasing their score, and the Warriors soon tied up the game 12-12. With an outside hit placed between Hays’ blockers by Fagan, the Warriors managed to break the tie and gain momentum. Lola Fernandez ‘23 entered the game and shut down Hays with her serves. Westwood finally hit game point and finished off the second set with a ten-foot line kill from Quesnel.

“We started off a little slow in the second set which made the team catch up but we finished it strong,” Fernandez said.

The third set started with the Warriors on serve receive and Menendez managed to gain the first point with a shank off of Hays’ libero. Hays kept the set close, not letting the Warriors relax. Maddie Gillispie ‘20 kept the ball from hitting the floor and a surprising back row hit from Beckham made Westwood gain momentum. Westwood reached game point and an unexpected line hit from Anna King ‘20 finished off the match.

“If we can show up and play the way we played last night, this season should be great,” Nelson said.

The Lady Warriors will be heading to Westlake on Tuesday, Aug. 27.